BLUFF CITY -- I learned the hard way that braided line has a shelf life.

That was the main theme of a fishing trip Monday on Lower White Oak Lake with Mark Shatley of Camden. For weeks, Shatley has been texting me photos of some of the big bass he's been catching at the centerpiece of White Oak Lake State Park in Ouachita County.

Some people text big fish photos to taunt. Shatley does it to tempt. Our schedules finally meshed, and I accepted his invitation to spend a day in his boat.

We met at the dawn of a gray, dreary morning that threatened rain despite the optimistic divinations of the weather prophets. I like that kind of weather for fishing in the summertime. I don't tolerate heat well, so I don't mind a sky soaking. A rain suit is like a portable sauna, so I don't wear rain gear in the summer. Being wet is only uncomfortable when you're blasting along at 70 miles per hour in a bass boat. That's not an issue on small lakes like White Oak that have expansive stump fields. During the few times that he ran his big motor, I don't believe Shatley exceeded 20 mph.

Shatley pursues big largemouth bass at Lower White Oak Lake, which the Arkansas Game and Fish Commission manages as a quality bass fishery. Anglers must release any bass between 18-21 inches long, and they may keep only one bass per day longer than 21 inches. Upper White Oak Lake, on the south side of the Arkansas 387 bridge, does not have special regulations. Fewer anglers fish the upper portion, but Shatley said it can be very good at times, especially in the spring.

Most big bass specialists use heavy tackle to wrangle fish out of heavy shoreline cover, but those tactics generally don't apply at Lower White Oak. Its bass do not relate to the bank. Instead, they concentrate in brush piles and treetops in open water. Since the entire lake is shallow, these structures constitute shallow cover, but since it is in open water, most of it is not visible. Modern graphs, especially Garmin's Panoptix, make it easy to find submerged structures, and they also reveal fish (or lack of fish) within and around the structures. Shatley said there's no doubt modern electronics make it easier to catch fish, but he doesn't like them because he believes they undermine the art of fishing.

For example, our first stop was at a pile of rocks and concrete deposited during some construction work when the lake was drawn down several years ago. Shatley slowly circled the area and triangulated three points on the shore in relation to a buoy. Every cast landed in the rubble.

"We know where all this stuff is from years of fishing it," Shatley said. "Panoptix and stuff like that allow a guy that's never been here before to come in and find fish, but I swear most of them never look up from that graph. I was watching one guy a couple of weeks ago with his head in his graph working a jig under the trolling motor. I'm sorry, but that ain't fishing. That's playing a video game."

Although Shatley has probably dozens of brush piles marked as waypoints on his Garmin Striker graph, he still triangulates. Buoys are supposed to mark brush piles that the Arkansas Game and Fish Commission established, but many of the buoys are not even near the piles anymore. Shatley said he suspects local anglers moved them.

Fishing midlake structure requires finesse tactics. Shatley uses a shaky head jig similar to the one that tournament anglers use on lakes with clear, deep water. With the hook point buried deep in his junebug colored worm, the shaky head is snag resistant if you fish a brush pile from the proper direction. If your retrieve follows the outward stretch of the limbs and branches, the jig will dance through the limbs effortlessly. If, on the other hand, you retrieve outside in, your jig will hang up in the forks of the limbs.

Despite seemingly ideal conditions, fishing was slow in the brush piles. Finally, I told Shatley I had a good feeling about the rubble pile and suggested that we return. My second cast got what felt like a bite from a big bass. I set the hook, and my braided line snapped. That ended my good feeling.

When nothing else panned out, Shatley took us to a place where a local angler caught five bass with a total weight of about 25 pounds in a recent tournament. There is nothing visible in that spot that should attract fish, but they were there. Shatley caught one bass that weighed nearly 4 pounds and several smaller ones. Again, I got a big bite and snapped the line on the hook-set, this time using a different knot.

After a third cast, my cellphone rang with a call that I needed to take. As I conversed, I felt a thump in the rod, and my line moved rapidly across the water. With my phone wedged between my ear and shoulder, I set the hook on something substantial and broke the line again, with a different knot yet.

"Nothing summons up a big bass like being on the phone," I said to Shatley, who shared similar experiences.

Clearly my line had weakened with age. Shatley said he no longer has that problem. He has a household full of people who are all learning to use baitcasting reels, so he has to re-spool all of his reels with fresh line nearly every week.

"If you had better line, you would have had a decent day," Shatley said.

"Thank you for that, brother. I'll have it next time," I said. 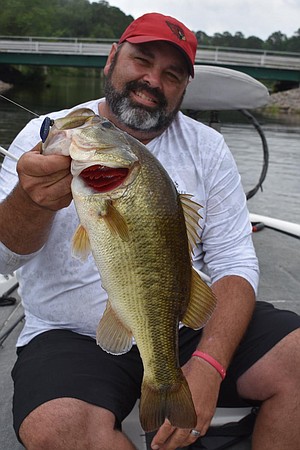