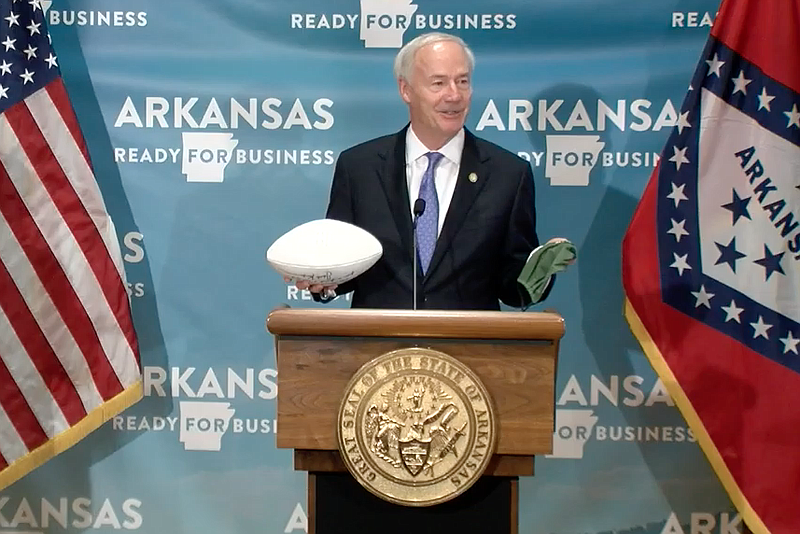 Arkansas Gov. Asa Hutchinson speaks to reporters at the state Capitol in Little Rock on Wednesday in this still of video provided by the governor's office.

Arkansas recorded 420 new cases of covid-19 as of Wednesday, Gov. Asa Hutchinson said, the lowest single-day increase in more than a week.

The governor also announced during his briefing at the state Capitol in Little Rock that a National Guard training exercise scheduled to happen this weekend has been canceled.

The number of people who recovered was 632, Department of Health Secretary Dr. Nate Smith said, meaning the number of active cases decreased as well, to 5,757.

Seven more Arkansans died of the virus, bringing the toll to 277.

Of the new cases, Smith said at least 33 are from correctional facilities. He said it’s likely some or all of the 69 cases from Lee County are from the East Arkansas Regional Unit state prison, though that had not been confirmed as of the news conference.

The number of hospitalized patients decreased by 15 to 275, Smith said, and the number on a ventilator increased by five to 72.

Hutchinson said overall it appears the state’s number of new and active cases are trending down, but he cautioned people not to think the state was in the clear.

He emphasized the importance of social distancing and wearing a mask when that is not possible. He added that if people want fall sports, including football, to happen, wearing a mask is key.

The National Guard exercise, scheduled to begin Saturday at Fort Chaffee and involve around 4,000 guardsmen from multiple states, has been canceled, Gov. Asa Hutchinson said.

Maj. Gen. Kendall Penn said as the Guard was trying to buy test kits to administer to the guardsmen, they learned of a statute allowing funds only to be used for tests of symptomatic individuals.

Because the National Guard and the governor wanted to test all guardsmen, not just those with covid-19 symptoms, the training was canceled.

Smith also spoke at the news conference of the serious complications the virus can cause even if a patient survives the viral infection.

He said someone infected with covid-19 can develop blood clots that could cause death and the virus can lead to neurological issues, including stroke.

Smith said he was also contacted by a physician who contracted the virus and even though he recovered from the respiratory component, he is now facing congenital heart failure. Smith said the doctor may not survive.

“Hopefully Arkansans are getting the message that consistency is what we need in disciplined behavior and social distancing, and wearing masks is a part of that,” Hutchinson said.

The total number of coronavirus cases reported in Arkansas remained at 20,777 Wednesday morning, according to a state website. The death toll remained at 270.

[Video not showing up above? Click here to view » https://www.youtube.com/watch?v=hsaPOp8fTic]