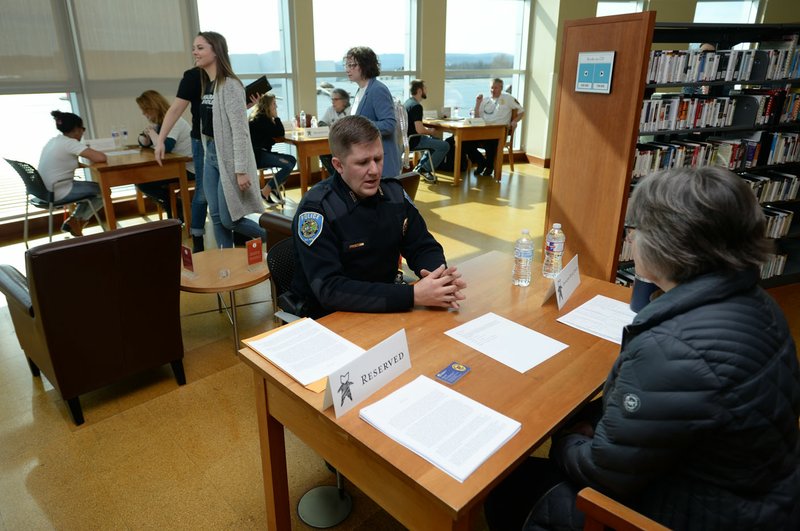 Kyle Jeney (center), a Fayetteville police officer, speaks Saturday with Leslie Spencer of Fayetteville at the library. The library created the second "Human Library of Fayetteville" where readers are able to "check out" one of 22 fellow residents to speak with them and learn about their life. Go to nwaonline.com/photos/ for today's photo gallery. (NWA Democrat-Gazette/Andy Shupe)

FAYETTEVILLE -- About 140 people flipped through the pages of others' lives Saturday at the Fayetteville Public Library.

The library featured the Human Library for the second time, giving participants an opportunity to enter into conversations with the potential to break down barriers, said Leah Frieden, assistant manager of the library's reference services department. The library first featured the event in 2018.

Stay up to date on events and activities for all ages through the library’s online calendar at www.faylib.org/calendar .

The experience is inspired by a concept created by the Human Library Organization of Copenhagen, Denmark, according to the nonprofit organization's website. The organization began in 2000 and supports Human Library engagements in more than 80 countries annually.

The underlying theme of the experience is "unjudge someone," Frieden said, and is designed to create conversations between people portraying the roles of books and event attendees acting as readers.

"It's to encourage conversations with someone who you might not meet otherwise," she said. "The idea is to challenge some stereotypes and prejudices through person-to-person conversation and connection."

About 23 people volunteered to share the personal details of their lives as books through the experience, Frieden said. Participants included a person with a chronic illness, immigrants, a police officer, a firefighter, a blind person, a recovered alcoholic and cancer survivors.

"They are just people telling their own stories," she said.

The "human books" and readers entered into 15-minute conversations throughout the four-hour experience, Frieden said.

"It's a back-and-forth conversation too, it's not as though the book is delivering a canned speech," she said. "It's really a conversation with the reader, and they're able to ask questions."

Readers were provided with information on the "chapters" of each book's story so they could go directly to aspects of the book's experience that may interest them, Frieden said.

"If there's a particular aspect of their story that they're interested in they can jump right to that," she said.

Debbie Halbert of Fayetteville and Kevin Frazier of Cave Springs participated as a book called "The Awakening" at the event, Halbert said. The best friends met when Frazier became Halbert's manager years before.

Halbert has since retired, and Frazier said he continues to work as the global culture, diversity and inclusion strategy director for Walmart.

Halbert shared her personal experiences as someone who grew up as a white person without a lot of exposure to the black community, she said. Her understanding of the community grew greatly as she got to know Frazier, a black man, better.

"I came to see problems that I didn't realize existed, and it's changed the way I interact with the world," Halbert said, adding her daughter also adopted two children of color. "The way I grandparent and the way I see the world they face has changed. So, I'm very, very grateful that this awakening happened for me."

Gerald and Amy Lamont of Fayetteville participated in the event as readers of "The Awakening."

"This is just such an amazing experience -- to go and meet several groups of strangers and connect with them," Gerald Lamont said. "It's a strong bonding experience."

There's value in having dialogue with others to learn their stories, Amy Lamont said.

"I think if we would get to know each other a little better and kind of be more on the same side, rather than on opposite sides, we'd find out that we're actually more like each other than we think," she said.

The library is a safe place to have such conversations, Frieden said.

"As time goes on with libraries and people have more access to information from home, we're kind of becoming more of a community meeting center and a community hub," she said. "It's a good, neutral place in the community for people to meet and have conversations."

There's value in sitting down with someone to learn about their personal story, Frieden said.

"Being face to face with another human person just breeds a lot of empathy and understanding," she said.

Continuing to have such conversations has the potential to influence change, Frazier said.

"I think the greatest threat to our nation today is the fact that either we have forgotten or we never knew how to have a dialogue," he said. "If we can just dialogue, I think half of our problems would go away."

Such conversations could have ripple effects going beyond Fayetteville, Frieden said.

"We're just hoping that it will make the community at large both realize and embrace the diversity of Northwest Arkansas and be more inclusive to people who you might initially perceive as different or other from you," she said.