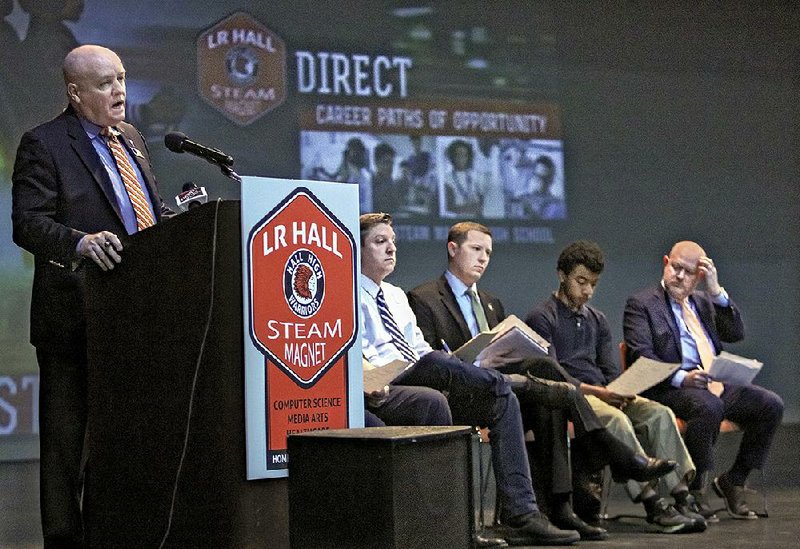 Tuesday's announcement of the three magnet themes for the central Little Rock school come after decisions were made late last year to transform the nearly 65-year-old Hall High into a special-program magnet school -- with a focus on science, technology engineering, arts and mathematics.

The school currently has an F-grade from the state based on student scores on state tests but it has shown some academic growth in the past couple of years. It will have no attendance zone. The school will be open to students throughout the district.

Also in recent weeks -- at the direction of the Arkansas Board of Education in December -- all of the jobs, including that of the principal, at Hall have been declared vacant for next school year. The jobs are to be filled in the coming weeks from the pool of all applicants.

Little Rock Superintendent Mike Poore and Hall's newly appointed STEAM specialist Joel Spencer revealed the magnet themes or pathways at a news conference at Hall High on Tuesday. They also announced that the 2020-21 school year student registration period has been extended to Jan. 28 for all of the district's high schools.

Poore said planners for Hall have been "pushed to be bold" in their efforts for the school changes.

"We want to have a Hall High that is exciting for ... current students so you will say, 'Whoa! This is what is coming?" Poore told an audience that included some current Hall students. "But we also want to generate excitement for students who select to attend Hall. Hall is truly a choice option. We want to have as many students as possible say, 'This is exactly what I've been looking for.'"

Current students at Hall have the option to remain at Hall until they graduate. Additionally, pupils completing Forest Heights STEM Academy for grades kindergarten through eight will be given first priority to enroll at Hall, Poore said.

Poore and other speakers made it clear that the Hall plans right now are a starting foundation only, a framework, "a tree without many branches and half-baked."

"There are so many more opportunities on how these can be built upon," Poore said of the focus areas. "But these make sense in terms of work that we have actually already been engaged in for the last several years," including already existing partnerships with community organizations that can now be expanded and strengthened.

Poore and Spencer were joined at the speaker's podium by Arkansas Education Secretary Johnny Key who acts in place of a school board in the state-controlled Little Rock School District; Little Rock Regional Chamber of Commerce Executive Vice President James Reddish and the city of Little Rock's Chief Education Officer Jay Barth. University of Arkansas at Little Rock Chancellor Kristina Drale, state and district science and career education specialists, and representatives of the Hall High alumni organization The Tribe joined the speakers on the stage.

Spencer introduced the magnet themes and the initial courses, activities and certifications that will be associated with each at the different grades.

In computer applications development, for example, students will be able to choose computer science principle courses or national Project Lead the Way engineering courses. As they progress through the grades, there will be coding and programming courses, work-based learning and a capstone project. Robotics, computer integrated manufacturing, unmanned aerial systems, cybersecurity and mobile app design are possible expansions within the magnet program.

In the medical practice and health care program, students will choose from among at least three categories: certified nurse assistant/associate arts of nursing, a pre-medical doctor or nursing pathway or a certified medical assistant pathway. Over time, programs could be expanded to take in pharmacy, emergency medicine and sports medicine, as well as X-ray technology.

The media arts pathway will include courses in advertising and graphic design that could be expanded to include architecture and computer-aided design, Spencer said.

Hall and the Little Rock district are working with the Little Rock Regional Chamber of Commerce to incorporate the Ford Next Generation Learning model of college and career academies for high schools.

The college and career academies -- including ninth-grade freshman introduction academy -- are operated in partnership with area businesses, industry and other institutions. The academies are currently in the planning and early implementation stages in almost all of the traditional public high schools in the Little Rock, North Little Rock, Pulaski County Special and Jacksonville school districts.

Key, the Arkansas education secretary, said the ideas and "big dreams" discussed for years for Hall are coming to fruition.

"It's a bold step for this high school, but it is not a bold step out of line for this high school," Key said. "There is a long line of very successful people who have come from here ... who are spreading that Hall Tribe spirit across the world. And now we have a chance to create something for you so that you can continue that in this 21st century."

Access to computer coding, to the new activity of e-sports and to job shadowing and work internships with some of the city's highest-quality and highest-profile employers are among the opportunities that will be available to Hall students, he said.

Key also praised the school for the student academic growth made in each of the past two years under the leadership of Principal Mark Roberts and his teaching and support staff.

"It's impressive and sets a model for what other schools can aspire to," he said, adding that the STEAM magnet program will enhance that.

Poore said that while the district has periodically invested in the Hall High building and the campus "has good bones," the new magnet programs will likely require upgraded laboratories and technology spaces for which funding -- such as grants -- will be sought.

Barth, the city's new chief education officer, noted that schools are healthier when the walls between them and the community come down and the community is a partner to the schools. That partnership can include city government funding programs, rank-and-file citizens serving as volunteers, and businesses stepping up with resources to create an empowered workforce.

"Our city government is happy to support this effort to continue the progress at Hall High," he said.

The Little Rock district's Community Advisory Board had taken a position more than a year ago that while the Hall High School climate has shown improvement, the traditional academic program needed enhancements greater than just curriculum tweaks to be attractive to parents and students. The science, math, technology and arts focus was offered as a possibility.

Community Advisory Board member Melanie Fox had advocated for the magnet program to be developed by committees from the community in the way that Forest Heights STEM Academy was crafted in 2015.

"I'm anxious for the community to be involved," Fox said about the Hall planning.

Jeff Wood, chairman of the advisory board, said the plans announced Tuesday show that a lot of thought and preparation has been done, and there is more to do.

"I trust the folks leading this effort will make the appropriate steps as timely as possible so we can be prepared for a wonderful new Hall STEAM Magnet High School in August," Wood said.

Poore said the district's student registration staff will be at Hall from 9 a.m. to 3 p.m. today through Friday to work with students and parents on the 2020-21 school year registration process. Additional details about the school will be added in the coming days to the district's website: lrsd.org.

As for staffing at the school in the wake of the Arkansas Board of Education's decision that all positions be vacated and opened to applicants, Poore said the principal will likely be selected by the end of this month. He said Tuesday that there were at least 10 applicants for the job earlier this month.

The district is advertising other positions at Hall. Those are department chairs for social studies, English, science and math, along with two assistant principals, head counselor, an attendance secretary, bookkeeper and registrar, and head football and volleyball coaches.