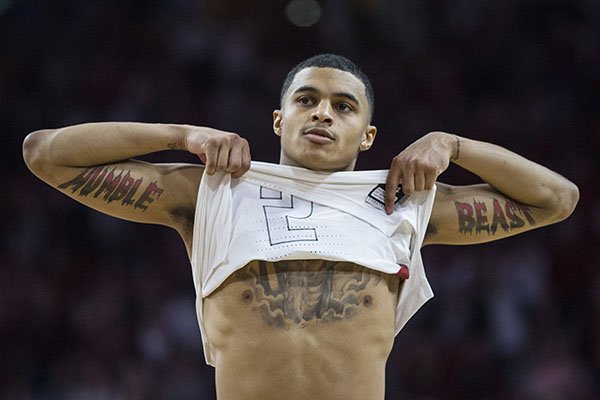 Arkansas guard Jalen Harris walks off the floor following the Razorbacks' 73-66 loss to Kentucky on Saturday, Jan. 18, 2020, in Fayetteville. - Photo by Ben Goff

FAYETTEVILLE -- Kentucky lost its coach but won the game.

The No. 10-ranked Wildcats rallied to beat the University of Arkansas basketball team 73-66 on Saturday before an announced crowd of 19,200 at Walton Arena after Kentucky Coach John Calipari drew two technical fouls and was ejected with 8:19 left.

But instead of folding before a frenzied crowd, the Wildcats responded with a 17-2 run to go ahead 61-49 with 2:42 left and regain control.

[Video not showing up above? Click here to watch » https://www.youtube.com/watch?v=COOfw0xypZ4]

"So regardless of what has happened before that, it's going to come down to those last pivotal minutes of a game. You better embrace it. You better make sure we're executing defensively and executing offensively."

The Wildcats (13-4, 4-1 SEC) pushed the ball on offense with Tyrese Maxey scoring consecutive baskets on fast breaks with a layup and dunk -- along with a free throw to complete a three-point play -- and Immanuel Quickley hit a three-pointer in transition to help Kentucky take a 12-point lead.

"The last thing they're expecting us to do is rebound and push the ball up the court," Payne said. "Well, that's what we did. We rebound that ball, we fly it up first, and then if we don't have anything we're going to execute. By doing that, we got a couple layups, got a wide-open three, and it opened the game up for us to give us a cushion."

After Jones' technical free throws, the Razorbacks (14-3, 3-2) helped Kentucky pull away with a 1-of-9 shooting stretch and a turnover.

"We thought we got them rattled, but they weren't rattled," said Jones, a junior guard who led Arkansas with 19 points and six rebounds before fouling out with 3:28 left. "All props to Kentucky for continuing to play hard, and all props to us for coming back and playing hard, but it wasn't good enough today."

[Video not showing up above? Click here to watch » https://www.youtube.com/watch?v=FASdsksiJXY]

"We had the momentum during the dead ball, and after that, it completely changed," Musselman said. "I thought the whole momentum changed after that in Kentucky's favor -- in every way, shape and form."

Arkansas pulled within 69-64 with 22 seconds left on a layup by Adrio Bailey, and he was fouled by Keion Brooks. But Bailey missed the free throw, and the Wildcats closed out the game with Quickley and Brooks combining to hit 4 of 4 free throws in the final 19 seconds.

"Honestly, we were just thinking we had to rally," Maxey said of Calipari's ejection. "Find a way to win the game."

Calipari was tossed after arguing an offensive foul call on EJ Montgomery.

"It happened so fast, we couldn't really react to it," Payne said. "But these kids are resilient. They deserve all the credit."

Arkansas shot a season-low 33.3% from the field (19 of 57) -- including 8 of 26 on three-point attempts -- and struggled when Kentucky switched to a zone defense after the Razorbacks had taken the lead.

[Video not showing up above? Click here to watch » https://www.youtube.com/watch?v=f1PLruLAGTk]

"That definitely caught us off guard, the zone, but there are no excuses," Jones said. "We run a zone offense every day, and we just didn't execute today in late-game situations. We just didn't do good with that today."

"One of our best players, our leader, Ashton Hagans, has four fouls," Payne said. "Well, how do we keep him in the game? If we stay man, they're going to drive him, and he could get a foul and he's out.

"If we go zone, he's guarding an area, so that's what we decided to do, which really helped us."

"I thought our free-throw shooting really hurt us," Musselman said. "Then lack of rebounding as well. From an effort standpoint, I thought we played really hard, but that's a long team and a really good team as well."

Kentucky beat Arkansas (14-3, 3-2) for the eight consecutive time. The Razorbacks haven't beaten the Wildcats since sweeping them during the 2013-14 season with two overtime victories.

It was Arkansas' first loss in Walton Arena this season after a 10-0 start. The Razorbacks had won 12 in a row at home since an 87-80 loss to Texas A&M last season.

"I want to congratulate Kentucky for coming into Bud and getting a good win," Jones said. "That's what great teams do, a top 10 team in the nation."

Kentucky rebounded from an 81-78 loss at South Carolina on Wednesday night, and improved to 53-13 after a loss in Calipari's 11 seasons.

"You could tell the whole entire arena wanted us to lose," said Wildcats 6-11 junior Nick Richards, who had 17 points, 9 rebounds and 2 blocked shots. "We just fought through it. Our guys, they stepped up. We fought through adversity today, came out with a big 'W.' "

Arkansas senior guard Jimmy Whitt had 14 points after scoring a career-high 30 in a 75-55 victory over Vanderbilt. Sophomore guard Isaiah Joe scored 13 points, but eight came in the final 1:39.

"This one hurts," Musselman said. "We had an incredible environment in the building. We don't want to let our fans down, and it's hard to create that atmosphere and get that atmosphere back.