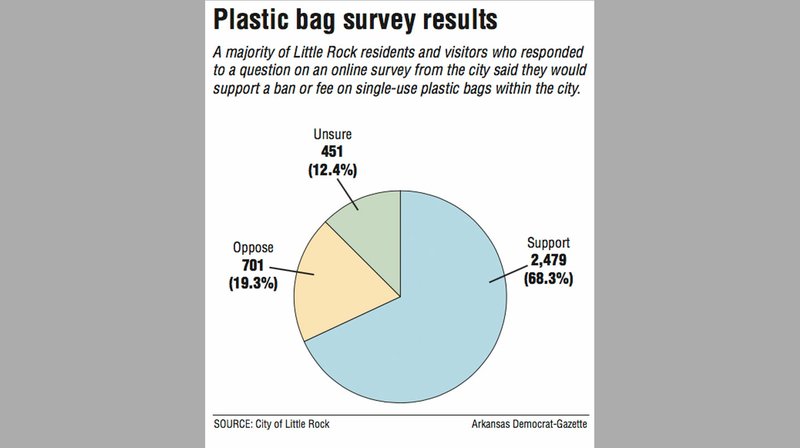 The majority of Little Rock residents and visitors who responded to an online survey from the city said they would support a ban or fee on single-use plastic bags in stores.

The survey's results were included among information being used by a city task force working on waste-reduction recommendations that will be presented to the city's Board of Directors.

The city's sustainability office put out the survey as part of its efforts to reduce waste and litter on Little Rock's streets and in waterways. The questionnaire was available on the city's website and distributed on various social media platforms for about a month, closing Jan. 10.

[WEEK IN LR: Catch up with the biggest stories from Arkansas' capital city in this free newsletter » arkansasonline.com/emails/this-week-lr]

Both began with a big-picture question: Do you support reducing litter in Little Rock's streams, waterways, and landfills? The vast majority of respondents answered "yes" on each.

In response to the resident and visitor survey's question on whether they would oppose or support a plastic bag ban or a fee at a store's checkout for a plastic or paper bag, about 68% of respondents who answered the question said they would. About 19% were opposed and about 12% said they were unsure or selected multiple responses.

The surveys asked what possible ways for reducing waste from single-use plastic bags they would support, including a citywide ban, a 10-cent checkout fee on plastic and paper bags, additional drop-off locations for plastic bag recycling, and greater customer access to reusable bags. Respondents were allowed to check multiple options.

Ways to reduce waste without a ban or a fee were the most popular options overall.

Comments in a free-response section of the survey ran the gamut from enthusiastic support for getting rid of plastic bags -- "thank you so much for doing this" -- to anger about the idea of a fee -- "that is stupid to pay for a bag."

"I'm happy that people care," Massanelli said. "I just want people to care. The end result is our oceans."

She added that in addition to keeping waterways such as the Arkansas River and Fourche Creek clean, the sustainability office is mindful of how litter on city streets can negatively influence people's perceptions of Little Rock.

A task force consisting of members of the city's Sustainability Commission and mayoral appointees will use the information gathered from the survey in a presentation to the Little Rock Board of Directors in late February or early March.

Melinda Glasgow, the city's sustainability officer, said the task force would likely not recommend that the city ban plastic bags outright. At a meeting Thursday, task force members discussed how different cities had found success in reducing plastic bag use with "hybrid" ordinances that use different measures to reduce waste at the point of sale.

The task force is still researching and discussing what would be done with revenue from a fee if one were levied. It's possible a portion would go to the merchant.

Though there wasn't an offline version of the survey, some respondents and task force members pointed out how a fee could impact the city's poorer residents, who might not have access to a computer, or reusable bags.

"I do not mind paying a fee and it would probably make me more mindful about using reusable plastic bags but I do wonder about the effects on lower income folks, or people who may not have access to information the way that I do," a Ward 7 resident wrote in the survey's comment section.

"We can't make assumptions based on our circumstances that a dollar wouldn't be a burden for a bag," she said.

Little Rock is not the only city in Arkansas making such an effort. The Fayetteville City Council received the results of a resident survey and were presented with a range of plastic-bag-reduction options in August.

"As a capital city, we have the responsibility to at least have a conversation and do research," Glasgow said.