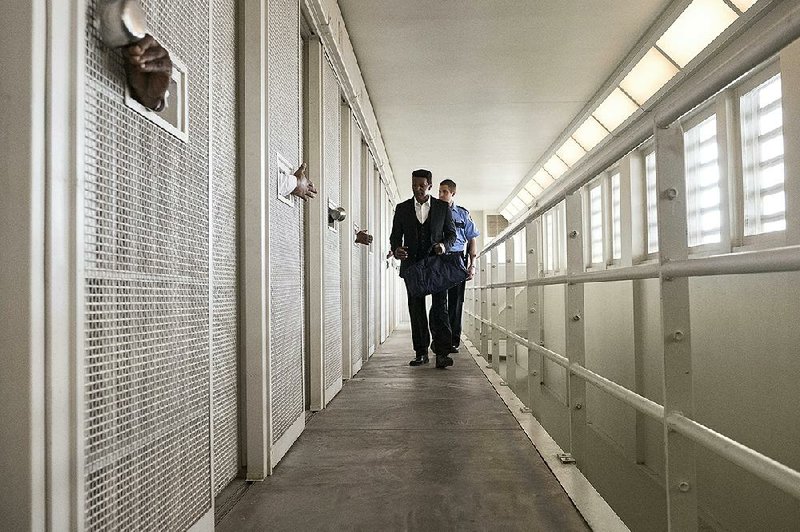 Walter “Johnny D.” McMillian (Jamie Foxx) is an innocent man caught up in a racist justice system in Just Mercy, a film based on the career of real-life civil rights lawyer Bryan Stevenson.

Earnest, well-meaning and well-made, Just Mercy is a respectful and respectable criminal justice procedural focusing on the egregious railroading of an obviously innocent man by law enforcement in the small town of Monroe­ville, Ala. -- a place best known as the longtime home of Harper Lee, whose To Kill a Mockingbird, which furnished us with an archetypal American moral hero in the image of Gregory Peck as Atticus Finch, was based on events that occurred in the town in the 1930s.

Walter "Johnny D." McMillan was at a church fish fry surrounded by dozens of witnesses, including at least one police officer, when 18-year-old Ronda Morrison was murdered in the Monroeville dry cleaners where she worked part time. That didn't stop a newly elected sheriff, desperate to solve a horrific crime, from arresting him nine months after the killing, the district attorney from prosecuting the case, a jury from finding him guilty and the judge from stepping in to override the recommended life sentence and imposing the death penalty.

Rating: PG-13, for thematic content including some racial epithets

If that's not miscarriage of justice enough for you, the prosecutor took the unprecedented step of sending Walter to Alabama's death row immediately after he was arrested. He spent 15 months on death row before he was even tried for the crime.

Walter McMillan was a black man. And Ronda Morrison was a blonde, pretty community college student with her life in front of her. It's not that much of a stretch to suggest that, as a moderately successful entrepreneur who drove a flashy truck and was reportedly running around with a married white woman, he made a convenient scapegoat.

As Walter, Jamie Foxx is extraordinarily empathetic. There's a weary stillness in him as he listens to his new young attorney Bryan Stevenson (Michael B. Jordan) tell him how he's going to fight for him. But Walter has heard versions of this song before, and he knows that his innocence is immaterial to the machine that put him here -- in Alabama, his skin color marks him as part of the criminal class. This young lawyer is about to find that out.

Bryan, an idealistic Harvard Law grad, has come to Alabama to right wrongs and provide anyone on death row a defense. (It's mentioned in passing that he has secured a federal grant to finance the project.) Walter's case looks to be a slam dunk -- the man was convicted on the word of a low-life (Tim Blake Nelson) who cut a deal with prosecutors in exchange for some incredible testimony about how Walter kidnapped him and made him drive to the cleaners. There's no evidence against him.

Still, we know it's not going to be easy. No one wants to lease office space to the guy trying to get convicted murderers released, so he lives and works out of the house of his paralegal Eva (Brie Larson in a small role no doubt undertaken because of her belief in the rightness of this film and her affinity for working with writer-director Destin Daniel Cretton). But when Eva's young son picks up the phone in the evening, we just know there's some racist on the other end, threatening to blow her whole family to hell.

It's not necessarily the movie's fault that it's predictable. The contours of the real Walter's case are grimly predictable. It's just that, as game as Jordan and Larson are, they never seem like more than cardboard crusaders. As the movie evolves into a standard-issue courtroom drama, it loses some of the force and poetry of early scenes where Walter and his neighbors on death row (O'Shea Jackson and Rob Morgan) console and tease one another.

Mostly the bad guys are evil, which is probably fair when one considers the facts of the case. And while the film is based on the best-selling book by the real Bryan Stevenson, who founded Alabama's Equal Justice Initiative, Jordan is essentially forced into what amounts to an underdeveloped supporting role. He gets to deliver speeches, which while full of truth are not necessarily conducive to satisfying cinema. He is eclipsed by Foxx's smoldering, dignified, battered but ultimately unbowed portrayal of a wronged man. Walter's strength shines through -- not even the ludicrous facial hair they stuck on him in the flashbacks obscures it.

Just Mercy is a good movie in that it tells an important story in a straightforward, unequivocal fashion. But aside from Foxx's performance, it's hardly a memorable one.