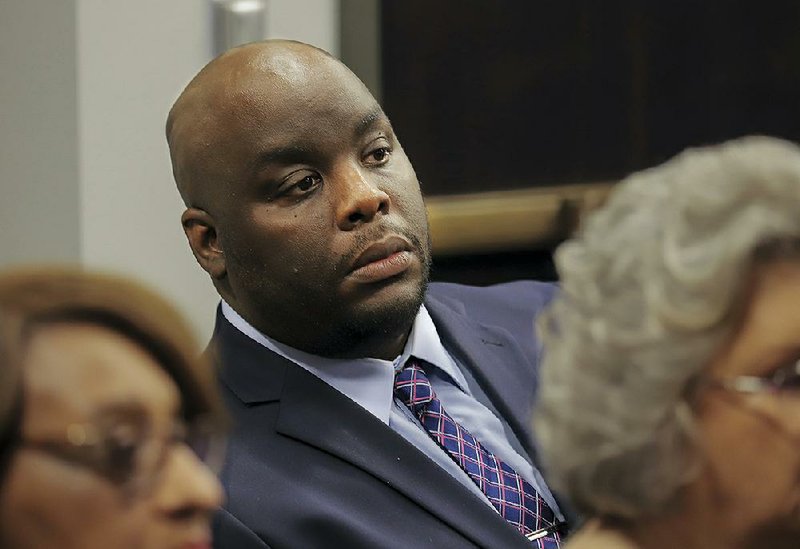 In this file photo, Jeremy Cegers, principal and superintendent of Southeast Arkansas Preparatory High School, watches as Arkansas Board of Education members discuss the fate of the school. (Arkansas Democrat-Gazette/John Sykes Jr.)

The state Board of Education opted Thursday to hold a hearing later this month on the fate of Southeast Preparatory High, a charter school in Pine Bluff that has been recommended for immediate closure because of financial and academic problems.

The Education Board will hold that hearing on the school and on the charter renewal application for Capital City Lighthouse Academy in North Little Rock at a special Jan. 24 meeting.

Education Board members set the hearing date during a meeting in which they also:

• Approved a 10-year charter renewal, an enrollment cap increase and a new school for the Maumelle-based Academics Plus Charter schools system.

• Approved, conditioned on annual reporting back to the Education Board, a five-year renewal of the charter for Arkansas Virtual Academy, which has D-graded elementary, middle and high schools that serve some 2,474 students statewide.

Arkansas Education Secretary Johnny Key called for the hearing on Southeast Preparatory in response to emails he and state Education Board members have received from parents, lawmakers and others in support of the school.

Those messages came after the state's Charter Authorizing Panel recommended in December that the Education Board revoke the state-issued charter that allows the ninth-through-12th-grade school to operate and qualify for state funding.

The school that is in its second year of operation started this year with about 107 students and has grown to 116, Principal/Superintendent Jeremy Cegers said Thursday.

Key called the recent emails -- in which parents said closing the school in midyear would force their children to return to schools where they were previously bullied or otherwise not comfortable nor academically successful -- "compelling."

"It's the student-side and the impact on the students that is a major concern," Key said in an interview after the Education Board meeting. But Key also said the "absolute worst case" for students would be if the school's finances reached the point where students would show up at 8 a.m. one day and find the school doors locked.

"'We have to balance all that," he said. "That's where a hearing would give us a chance and give the school a chance to explain some of those details. I believe from feedback I've heard that there are efforts being made to address some of the financial concerns. What we are concerned about is ... do they have enough money to finish the school year?"

Key publicly urged the school leaders to respond to the state's Division of Elementary and Secondary Education when agency staff members reach out to them. The state agency doesn't seek to close schools but to support them.

Southeast Preparatory High officials, including Cegers, were called before the Charter Authorizing Panel last month after the school received an F grade from the state for the 2018-19 school year.

The grade is based on ACT Aspire results, as well as other factors. The school is in Jefferson County, which is also home to the Pine Bluff and Dollarway school districts that are operated by the state because of financial and academic problems. Like Southeast Preparatory, Pine Bluff High and Dollarway high schools have F grades from the state.

Southeast Preparatory had almost 66% of students in need of support in reading. It also had low bank balances, negative end-of-year financial projections, and overdue bills for food service, rent and utilities. The school's bank balances appeared to be healthy only because invoices had not been paid.

Still other concerns raised at the meeting last month included no budgeted workers' compensation insurance and no teacher retirement payments.

Panel members also learned that the charter school had failed to provide adequate education to 11 special-education students under the terms of their individual education plans, which will require the school to provide compensatory instruction for at least two months. That would place an even greater financial burden on the charter school.

Decisions made by the authorizing panel, which is chaired by Arkansas Deputy Education Commissioner Ivy Pfeffer and consists of state employees and others, are subject to review by the state Education Board. The Education Board has the authority to finalize panel decisions on charters without further review or conduct its own hearing on a charter school before making a final decision.

"We want the opportunity to show our plan," he said. "The concerns they have are the same concerns I had when I came [to the school] in July, and we have been addressing them already. We are fiscally sound. We have compensatory services in place [for special-education students.] The opportunity to be heard is going to work out tremendously."

LaToya Hadley, a mother of a ninth-grader, was among the parents, grandparents and community members who attended Thursday's Education Board meeting in support of the school.

In an interview, Hadley praised the school for how it cares about students to the point that the school faculty called Hadley periodically to check on her daughter and offer support even before the girl transferred to Southeast Preparatory. Hadley also praised Cegers for his efforts on behalf of the school, including his communications about the school's issues with the families.

Education Board members asked that they be provided with more information at the coming hearing about the school's finances and community support, and special-education services.

"Nobody wants to close a school and displace the students at this time of the year," Education Board member Fitz Hill of Little Rock said in asking Cegers for an action plan that the Education Board can help support.

Renewal Thursday of the state-issued charters for Academics Plus Charter School -- the state's oldest charter school system dating back to 2001 -- and Capital City Lighthouse Academy got hung up on their proposed waivers of a 2019 state law on school counseling services.

A portion of that law states that "a school counselor shall spend at least 90% of his or her working time during student contact days providing direct services and indirect services to students.

The Charter Authorizing Panel in December had approved the charter renewal applications -- with the waiver of the Arkansas Code Annotated 6-18-2004 -- for both schools.

Key urged the Education Board to conduct its own review on the renewal applications in light of the waiver on counseling provision.

He noted that granting the waiver would result in similar waiver requests from other school systems, and that Gov. Asa Hutchinson had made the counseling law and its emphasis on services to students a priority in his package of legislative proposals last year.

"I'd like to give this law some time," Key said.

The Education Board voted to put the review of Academics Plus' 10-year renewal -- primarily the counselor provision -- at the end of Thursday's agenda, and to conduct a review on the Capital City charter renewal at the Jan. 24 special meeting.

Rob McGill, chief executive officer for Academics Plus, agreed Thursday in that short review hearing to rescind the requested waiver on school counselor time. However, he added a waiver of language in another part of the statute that defines "direct services" in regard to counselors.

McGill said he wanted counselors to have the flexibility to spend more time per week with students than the law provides.

Concern about the D grade caused Greg Rogers, state assistant commissioner for fiscal and administration services who is also a charter authorizing panel member, to propose a shorter renewal period -- to June 2030.

Along with the 10 years, the charter panel and the Education Board approved a requested 700-student increase to the 1,300 enrollment cap at the Maumelle campuses, and authorized a new school in northwest Pulaski County. McGill said the charter system is purchasing 40 acres near Counts Massie Road for a high school building to open in 2021. Construction is to begin this summer.

The maximum enrollment cap for the system to be phased in over five years will be 2,975.