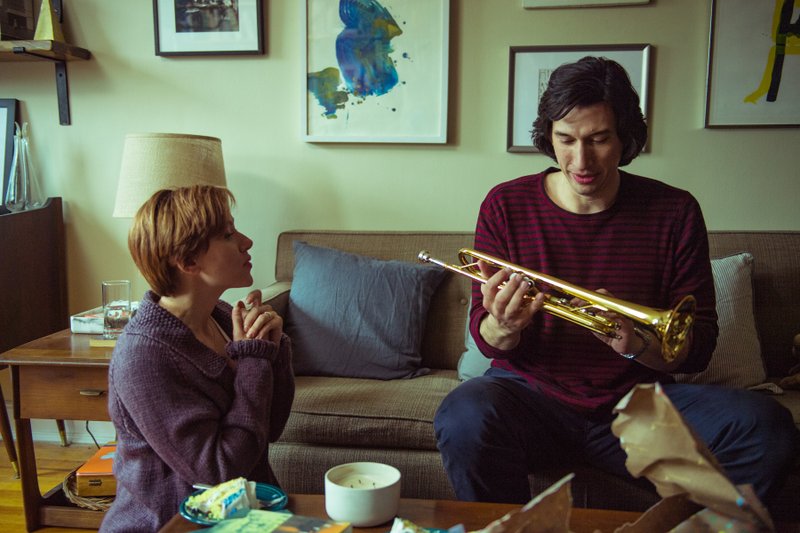 As is our custom, we start off the year by checking in with a few heavily invested moviegoers/critics for their thoughts on the past year's best. And then we run them with a minimum of editing. Here's this week's batch -- expect at least one more go 'round next week.

10. Transit -- An alluring examination of identity, fate and the ever-present danger of repeating history. Christian Petzold melds history with contemporary to create a setting and narrative that feels plucked from the past yet intensely relevant today

9. Jojo Rabbit -- Watching this film walk the tightrope of taste is impressive by itself. But I never expected to be so affected by Taika Waititi's "anti-hate satire." It's hilarious and heartbreaking, joyful and appalling, all connected by a timely message of hope.

8. Fast Color -- A criminally overlooked female-driven family drama disguised as a superhero origin story. Forget the capes and cowls. This moving film is interested in themes of reconciliation, embracing individuality and the power of maternal bonds.

7. Marriage Story -- Perhaps the most authentic film portrayal of divorce and all of its devastating complexities. It's driven by a dense and emotionally detailed Noah Baumbach script and two powerhouse performances from Adam Driver and Scarlett Johansson.

6. Parasite -- Bong Joon Ho's latest film defies categorization. It's filled with delicious black comedy, biting social commentary, some surprising jolts of heartfelt emotion and a violent throat punch when you're least expecting it. There was nothing else like it in 2019.

5. Little Women -- Greta Gerwig proves there is room for another adaptation of the Louisa May Alcott classic. Gerwig captures all of the energy, personality and period appeal while putting her own impressive stamp onto the story. And it helps to have a stellar cast.

4. Once Upon a Time ... in Hollywood -- As someone who has long wrestled with Quentin Tarantino movies, Hollywood had me under its spell from its very first frame. It's a vibrant time capsule full of Tarantino excesses yet with a maturity we rarely see from him.

3. Ad Astra -- I'm a sucker for thought-provoking science-fiction and James Gray's contemplative space adventure delivers. This isn't the first film to use space as an allegory, but it does so in a way that left a powerful impression on me. Plus it gave us Brad Pitt's second top-notch performance (see Hollywood, above) of the year.

2. Joker -- Flimsy controversies and misguided outrage aside, this is a movie that demands to be reckoned with. It's a daring and provocative indictment of a society that not only creates monsters but often lifts them up. Joaquin Phoenix's fiercely twisted portrayal is simply unforgettable.

1. A Hidden Life -- A return to form for Terrence Malick who melds his early narrative-driven storytelling with his later evocative visual meditations. It offers up a soul-stirring portrait of a rare type of hero that incorporates Malick's usual flourishes in the best way possible. Beautiful, exquisite cinema.

10. Dolemite Is My Name -- Yet another Netflix entry as Eddie Murphy proves he's the King of Comedy playing Rudy Ray Moore in the title role.

9. Marriage Story -- Another Netflix film with a misleading title. It's definitely not about marriage. This movie could hit home with some couples with its very truthful and painful portrayal of life.

8. The Irishman -- Robert De Niro, Al Pacino and Joe Pesci. Need I say more? I bow down to Netflix. They put out several films this year on the streaming service, and I enjoyed each one.

7. Ford vs. Ferrari -- The true story of how Carroll Shelby and Ken Miles help Ford defeat Ferrari at the 1966 24 Hours of Le Mans.

6. Parasite -- I'm biased. The film is South Korean and is the best foreign film of 2019. Remember this on Oscar night.

5. Toy Story 4 -- Pixar's latest and greatest. It's the final chapter of Woody and Buzz. A fitting end.

4. Once Upon a Time ... in Hollywood -- The ninth film from director Quentin Tarantino. The dialogue and his interpretation of old Hollywood make this a must-see.

2. Star Wars: Episode IX -- The Rise of Skywalker -- It's OK that critics are not fond of the latest chapter in the Star Wars Universe, but remember J.J. Abrams could only do so much to finish the story after Carrie Fisher's death in 2016. Especially since the story focused on Princess Leia. After 42 years, the Skywalker Saga is complete, and I'm satisfied.

1. Avengers: Endgame -- A shared universe of films was created in 2008. This film was the culmination of 11 years and 22 films ... and it exceeded all expectations.

10. Ready or Not -- Brutal to its core with as much blood as a Tarantino feature, Ready or Not fuses that tricky tone of violence and irreverence into a wild, 90-minute experience. This isn't anything you haven't seen before, especially if you keep current with the horror genre, but it is so aware of what it is and so expertly crafted to be the best version of itself that everything about it feels original and raw.

9. The Last Black Man in San Francisco -- This is truly about this sense of history and this need to honor places and people who have become myths in their own right as their stories have been reconfigured as they've been passed down; the myth becoming more and more layered and further and further from the truth as it goes from one generation to the next. This abstract, dreamlike presentation of the past not being the best indicator for what should dictate one's future. A film to be experienced almost more than it is to be discussed.

8. Dark Waters -- Dark Waters is not only compelling and exquisitely crafted but is terrifying as hell. A true wake-up call to a nation that has subscribed to the fact everything they consume probably causes cancer in one way or another. It's a shame this will get overlooked come awards season and not because it deserves the prestige (although it does), but because it won't be afforded the publicity that would garner more interest from the average moviegoer. It's a shame more people won't see this because I haven't been able to stop thinking about it since I did.

7. Booksmart -- Much of the conversation around Booksmart seems to be focused on how it and its stars will be perceived down the road and what it will come to represent in their careers. Whether it be the one that introduced them to the world, the one they'll never get away from or the one that may not be their best or biggest but will always be most people's favorite. Booksmart is likely to become a staple of sleepovers for the current generation of high-schoolers, but the magic is in why it will become these things: the characters themselves.

6. Joker -- With Joker, Todd Phillips and Joaquin Phoenix have crafted as gritty, raw and grounded a movie as any film inspired by comic books has dared to be. And in that type of portrayal, there is inherent shock to be found, but while Joker and its screenplay wrestle with what exactly it's trying to say it stands to make a statement about how this product of certain circumstance inspires a man to become what he believes necessary to remedy others from those same, undesirable circumstances. That's not to say he's right, but what is maybe most unsettling about the film and Phoenix's performance is that Arthur believes he is.

5. Parasite -- Parasite's calculated blend of drama, comedy, satire and unbelievable tension give way to scenarios in which the rich and poor see the same circumstances with vastly different perspectives. One recognizing what is being done to them as a con or crime while the other viewing it simply as a means to an end ... survival, in other words. Director Bong Joon Ho ultimately alludes to the fact that the poor, no matter the lengths of their tactics or the subtleties of their actions, still find themselves figuratively buried if not literally, by the world and by the ramifications of their actions.

4. Avengers: Endgame -- The culmination of 11 years and 22 films worth of story, Avengers: Endgame brings to a conclusion one of the greatest experiments in cinematic history and does so with as much grace and satisfaction as one might hope or expect a single moment to capture. That isn't to say there aren't a few hiccups along the way, but what is here to complain about feels so quaint in comparison to what the film gets right that they hardly seem worth mentioning.

3. Once Upon a Time ... in Hollywood -- As someone who has never visited California or more specifically, Hollywood, and as someone who wasn't born until nearly two decades after the year in which Once Upon a Time ... in Hollywood takes place there were no personal nostalgic ties to what is very clearly a very nostalgic movie for its writer and director. I love the movies as in "the movies," sure, both for their fascinating behind the scenes processes as well as certain aspects of the business, but it isn't necessarily any one thing in Hollywood that makes it special. Rather, its the effect each of these elements has on one another. The meticulous re-creation of 1969 informed and enhanced the performances of these fictional characters which were in turn heightened in the context of the film by the real-life events that writer/director Quentin Tarantino weaves through his narrative so as to create a sense of familiarity while still holding tight to the destination he's driving toward. Ultimately, this stands as one of Tarantino's best, most introspective works as it delivers the feeling one wants to leave the theater with after having experienced a Tarantino flick while the experience in and of itself is something of an unexpected and surprisingly soulful one.

2. Knives Out -- With Knives Out, writer/director Rian Johnson reels you in under the guise the mystery is to be one thing, but the real mystery here isn't what you suspect it to be and in breaking through this anticipated belief early on Johnson allows himself to not only deliver on the promise of a good "whodunit" but layer in his characters and their revelations with pertinent commentary as to the sense of entitlement certain people feel.

1. Uncut Gems -- What is maybe the best aspect of the exceptional Uncut Gems is the fact that yes, this is very much Adam Sandler doing something outside of his standard routine, but this isn't Sandler playing serious simply for the sake of proving he can, in fact, act when the material calls for it. No, this isn't sad or depressed Sandler simply for the sake of being taken seriously, but instead writer/directors the Safdie Brothers (Good Time) have somehow lured the Sandman into giving a layered, physical performance while also remaining one that plays off his inherent charm and charisma. He's used perfectly here. So perfect in fact, it's hard to imagine anyone else in this role except Sandler. While not necessarily what one might think of as a rewarding experience, Uncut Gems bears so many gifts and moments to cherish throughout that the stress inherent to them feels like little more than the price one must pay for such a high.