Man, and his dog, wow NBA crowds with acrobatic act 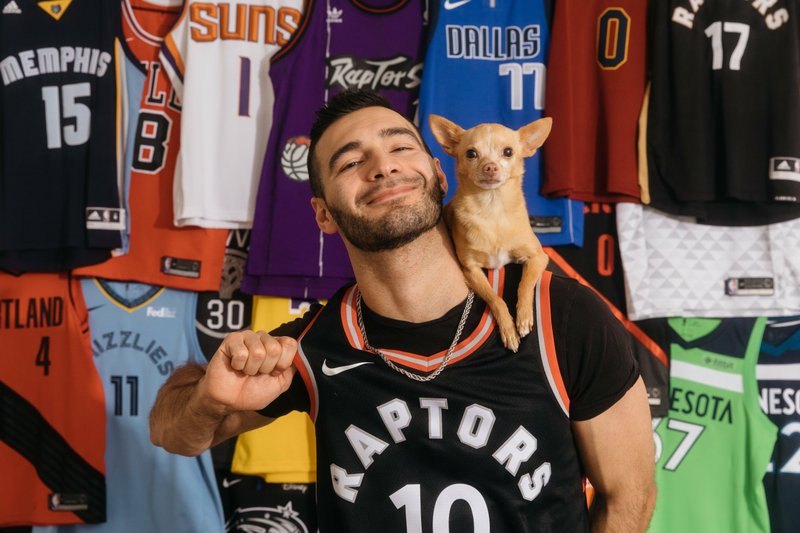 Christian Stoinev and his dog, Percy, are one of the NBA's favorite halftime acts. "He's most definitely the star," Stoinev said of his 7-year-old Chihuahua. (For The Washington Post/Mikayla Whitmore)

LAS VEGAS — Christian Stoinev was born and raised to entertain crowds: The fifth-generation circus performer grew up with the Big Apple Circus in New York City and began mastering his hand-balancing act before he was a teenager. But when the 27-year-old basketball obsessive heads to center court to wow NBA crowds with his halftime act, he knows he isn't the main attraction.

That honor belongs to Percy, a golden Chihuahua that pops out of a box midway through the performance to climb Stoinev's body and perch on his feet during handstands. While Stoinev works through his complex moves like a gymnast on a pommel horse, the tiny dog, which performs under the name "Scooby," mugs for the crowd by waving his front paws. Inevitably, Scooby draws the biggest cheers with his grand finale: jumping from one basketball to another without losing his balance.

TNT's Charles Barkley and Kenny Smith have praised the act on Inside the NBA, and 2018 MVP James Harden once came over to greet the dog after a game. Fans and arena staffers regularly call out Scooby's name as the partners commute to shows.

"He's most definitely the star," Stoinev said of his 7-year-old dog, which was born in Mexico and has performed with him for five years. "That's why I don't reveal him until I'm done with my skills. I get my joy from him, and I'm proud when people recognize him. We have a connection and a chemistry that's unlike any other. It comes from performing together over and over."

"Christian and Scooby" have become regulars on the halftime circuit, logging more than 200 shows at NBA and college games since 2013. Their act showcases a man's love for his best friend, but it also reflects Stoinev's journey from a childhood in the circus to his grown-up life as an independent performer and entrepreneur.

Stoinev's father, Ivan, left Bulgaria as a teenager to pursue a teeterboard act with Ringling Brothers. Stoinev's mother, Maritza Atayde, was an aerial specialist and a member of the family that started the Circo Atayde Hermanos, a prominent circus in Mexico. Ivan and Maritza met while Ivan was on tour, and they quickly married. As the couple performed throughout the United States, Maritza home-schooled her son and Ivan introduced Christian to the family business.

"I stood on my dad's shoulders as he climbed the ladder and then stood on his head while he balanced on top. It was my first taste of performing," Stoinev recalled, adding a disclaimer because he started at age 5. "I had a safety line, so I wasn't risking my life."

Stoinev experimented with juggling, unicycling and wire-walking before deciding that hand balancing was his specialty at age 10. Within a few years, still guided by his father, Stoinev added a dog to his routine. Audiences ate it up.

But the isolating, rigorous circus life took a toll. Stoinev didn't go to public school, instead attending classes inside a semi-truck turned one-room schoolhouse that traveled with the Big Apple Circus. He fell in love with basketball and the Toronto Raptors thanks to Vince Carter. But his parents had little interest in the sport, and he wasn't able to play on a school team.

After receiving his high school diploma through The School For Young Performers in New York City, he put his budding career on hold to attend Illinois State University — a decision he felt was met with skepticism by the circus community. Dogs weren't allowed in the dorms, so the original Scooby, Stoinev's first partner, stayed at home.

Stoinev graduated with a degree in broadcast journalism and saw two paths: an entry-level job at a small-town television station or performing with Scooby. The second option seemed more lucrative, so he blindly emailed videos of his act to various professional teams.

The WNBA's Minnesota Lynx gave him a shot in 2013, and the New York Knicks and Indiana Pacers quickly followed suit. With an early boost from a booking agency, Stoinev worked as many as 40 shows per season in the years that followed. Established NBA halftime acts can earn between $1,500 and $5,000 per show, plus travel expenses, so he didn't second-guess his career choice.

Although Stoinev's routine typically runs less than seven minutes, the act has become a full-time commitment. In addition to their halftime work, Christian and Scooby make more than 500 appearances per year for Opium, a twice-daily variety show in Las Vegas. That workload regularly forces Stoinev to fly out at 5:30 a.m. on game days for his NBA gigs, and he travels so often that he has frequent-flier status on three airlines.

Their preparation regimen is intense too. The 6-foot, 185-pound Stoinev burns 500 calories per day with a warm-up cardio workout before proceeding to weightlifting and skill work. His maintenance program includes stretching, physical therapy and, on occasion, cryotherapy. Meanwhile, devising a new trick can take countless hours and months of repetition. Stoinev trains his dogs, including 1-year-old Milo, gradually. They learn to sit on his feet, with a spotter, while he does a headstand, before building up to unattended stunts and the handstand's greater heights.

Stoinev has evolved his look as he has settled into NBA life. He once wore bright and tight circus outfits, but now usually performs in the host team's jersey. While his parents used to insist that he appear like a traditional circus performer — clean-shaven and free of accessories — Stoinev now takes the court with a scruffy face, a black earring and hair ties around his wrist.

"I didn't want to be fake onstage," Stoinev said. "I want [Scooby and I] to be how we are normally. He has a delicate and sensitive personality, so I'll take time to pet and kiss him. I know he's not my kid, but it's good practice for one day if I have kids. We have a genuine affection, and I think that's what has made us successful."

Christian and Scooby also have a Forrest Gump-like ability to turn up at big moments: They worked halftime when Zion Williamson blew out his sneaker at Duke, when LeBron James drilled a buzzer-beater in the 2015 playoffs and when Damian Lillard nailed a series-clinching jumper in May. Their highest-profile show: Game 3 of the 2017 Finals, when Kevin Durant famously hit a dagger over James.

Not every performance has gone smoothly. Wisconsin's extremely low temperatures once threw off Scooby's standard pregame potty trip. The dog pooped on the court during the show, embarrassing Stoinev and aggravating Milwaukee Bucks officials. Video of the accident went viral, and the duo has not been invited back.

Still, Stoinev and his dog are a consistent hit with crowds thanks to their intimate choreography. Scooby circles Stoinev's head, snakes through his legs and walks on his back. Stoinev, who doesn't like bigger dogs, never flinches. Their bond has landed them numerous television appearances, including America's Got Talent.

"Some older acts have lost their fastballs," said J.E. Skeets, the podcaster and former NBA TV host, who has chronicled the league's lighter side for years. "Christian is a natural showman, and Scooby is adorable. They're the premier act right now."

When he launched his career, Stoinev worried that the "cute kid and cute dog" act might have a shelf life. Now, he has collected dozens of jerseys from various shows and wants to perform until he is at least 35. He admires the longevity of Red Panda — the most famous NBA halftime act — and plans to install Milo as the next "Scooby" once Percy gets too old.

Basketball has consumed Stoinev's life: He watches League Pass nightly and hopes sports broadcasting will be his next chapter. Framed jerseys and performance pictures decorate his living room, and the dogs' basketball hoop hangs by the Christmas tree.

"My parents are proud of me for maintaining the act, but I don't think they totally get it," he said. "Their passion is the circus. Mine is basketball. I grew up begging my mom to buy me a Vince Carter jersey. Now, the teams give me jerseys, and I'll keep them forever. This act means everything to me. I was a kid who wanted to play, and I found my way onto the court."