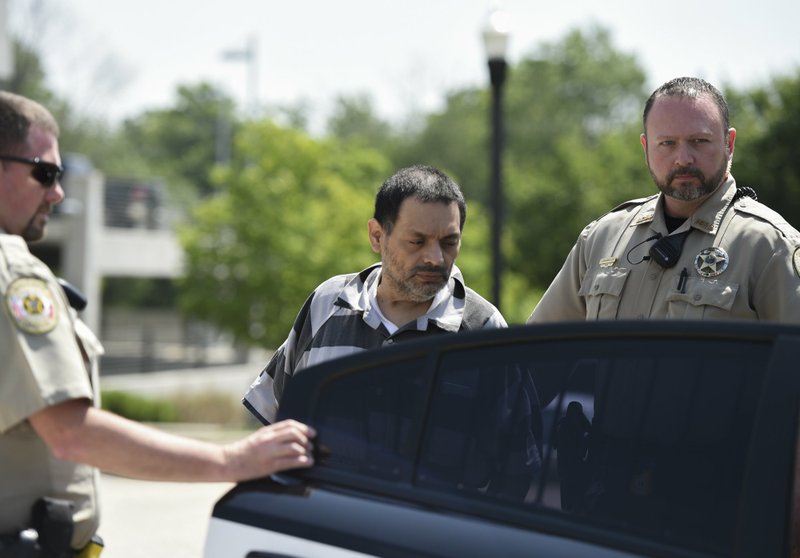 Mauricio Torres is escorted out of the Benton County Courthouse Annex June 21 in Bentonville. Testimony in second capital murder trial in the death of his 6-year-old son began Thursday. (File photo/NWA Democrat-Gazette/Charlie Kaijo)

BENTONVILLE -- Two of Maurice Isaiah Torres' former teachers testified Thursday about their concern he was being physically abused after seeing bruises on his body.

Peri Heffernan was the boy's kindergarten teacher at Ambassador for Christ Academy in Bella Vista. She was the first witness prosecutors called to testify at the capital murder trial of Mauricio Alejandro Torres.

Torres, 50, of Bella Vista is charged with capital murder and battery. He pleaded not guilty to the charges. Prosecutors are seeking the death penalty. It is Torres' second trial. He was previously convicted of the murder and battery charges, but last year the Arkansas Supreme Court overturned the convictions and ordered a new trial.

Torres is accused of sodomizing his 6-year-old son with a stick in Missouri, causing his death. The boy died March 30, 2015, at a Bella Vista medical clinic. A medical examiner testified in the 2016 trial the boy's death was caused by a bacterial infection resulting from sodomy.

Heffernan said Isaiah came to school with bruises on his body. He also stole lunches and took food from the garbage, she said.

"It seemed as if the bruises were coming or going," Heffernan said. "I wasn't sure if they were new or old."

Heffernan said she suspected abuse and took photographs of the boy and her concerns were reported to the state's Child Abuse Hotline.

Heffernan said Isaiah once had a large bruise on his back. "I don't know how to describe it," she said. "It was pretty much the entire lower back area."

Hannah Paul was a music teacher at the school and taught Isaiah and his two sisters during that 2013-2014 school year.

"He had a great smile and contagious joy," Paul said of her former student. "He was a great kid."

Paul said Isaiah became moody and was no longer his easygoing self during the school year.

She said Isaiah was the only student she was aware of who stole food. Paul said Isaiah stole a lunch one day and went into the restroom to eat it.

Paul said she also saw bruises on Isaiah and took photographs of the injuries. She also saw a large bruise on the boy's back.

The two teachers said no one ever contacted them as result of the hot-line call and Isaiah didn't return to the school the following school year. His parents started homeschooling him.

John Cottingham was one of the Bella Vista paramedics who went March 29, 2015, to the Torres' home. He said when they arrived Isaiah was unresponsive on the living room floor.

Cottingham said he notified law enforcement because of the boy's injuries.

The three were the only witnesses for Thursday's proceedings.

The jury of seven men and five women listened to the opening statements.

Benton County Prosecutor Nathan Smith told jurors Isaiah had the misfortune of being the "biological son of Mauricio and Cathy Torres," and they both failed their son.

Smith said they both are legally guilty in connection with the death of their son, but Smith described Mauricio Torres as the person primarily responsible for the boy's death. Smith said the jury will hear Torres admit to putting a stick in his son's rectum.

"This case is the story of the abuse, torture and murder of 6-year-old Isaiah," he said.

Bill James, one of the lawyers for Torres, told the panel Torres was involved in the abuse of his son, but James pointed the finger at Cathy Torres as the main person responsible for the abuse. James said his client worked six days a week and Cathy Torres was with the children the majority of the time.

James said his client sometimes spanked his son, but he mainly made his children do physical activities as punishment. "Cathy was the disciplinarian," James said. "She was there most of the time. She did most of the abuse."

James said Torres was afraid of losing his family because his wife threatened to leave him if he complained about the mistreatment of their children.

Cathy Torres pleaded guilty in 2015 to capital murder and battery. She was sentenced to life imprisonment without the benefit of parole. James said she is expected to testify.