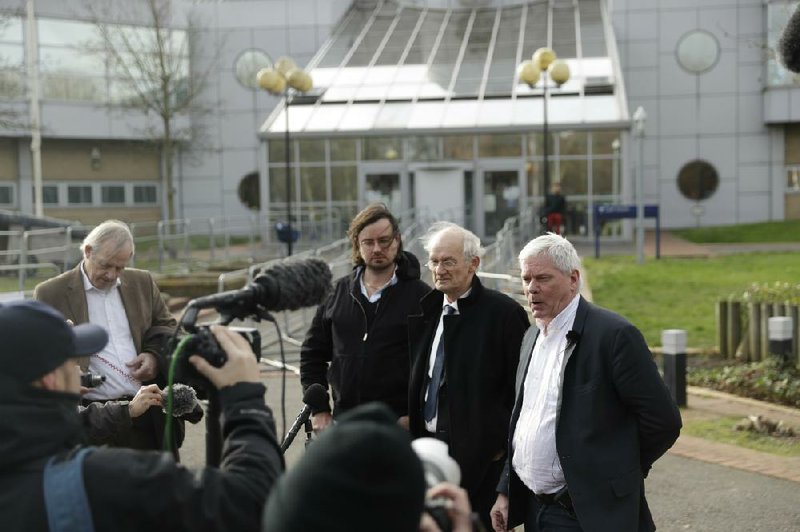 LONDON -- A lawyer for Julian Assange complained Tuesday that the WikiLeaks founder was handcuffed 11 times, stripped naked twice and had court papers taken away on the first day of a hearing on his extradition to the United States.

Attorney Edward Fitzgerald told a judge that the treatment of Assange at London's Belmarsh Prison "could be a contempt of this court." The extradition hearing opened Monday at Woolwich Crown Court, which is next to the prison.

District Judge Vanessa Baraitser, who is hearing the case, said she had no power to act unless Assange became unable to participate in the proceedings, which are expected to last several months.

"If it comes to that, please let me know," the judge said.

Assange, 48, is wanted in the U.S. on espionage charges over the leaking of classified government documents a decade ago.

U.S. prosecutors accuse Assange of conspiring with former U.S. Army intelligence analyst Chelsea Manning to crack a password, hack into a Pentagon computer and release hundreds of thousands of secret diplomatic cables and military files on the wars in Iraq and Afghanistan.

They allege that WikiLeaks' publication of the unedited documents put U.S. intelligence sources who were mentioned in them at risk of torture or death.

Assange says he was acting as a journalist entitled to First Amendment protection. His lawyers argue that the U.S. charges -- which carry a maximum sentence of 175 years in prison -- are a politically motivated abuse of power.

He said that the following year Assange phoned the White House to warn that a password published in a book about WikiLeaks by journalists from The Guardian newspaper -- one of WikiLeaks' then-media partners -- could allow people to view the full unredacted cache of documents. Summers said Assange had warned that "unless we do something, then people's lives are put at risk."

WikiLeaks' relationship with its media partners, which included The Guardian and The New York Times, deteriorated, and in 2011 WikiLeaks began releasing large numbers of the uncensored documents.

The Guardian said it was "entirely wrong to say The Guardian's 2011 WikiLeaks book led to the publication of unredacted U.S. government files."

"The book contained a password which the authors had been told by Julian Assange was temporary and would expire and be deleted in a matter of hours," the newspaper said in a statement. "

Assange has been jailed in England since April, when he was evicted from the Ecuadorian Embassy in London. He took refuge in the embassy seven years earlier to avoid being sent to Sweden over allegations of rape and sexual assault.

A British court handed him a 50-week sentence for jumping bail in 2012.