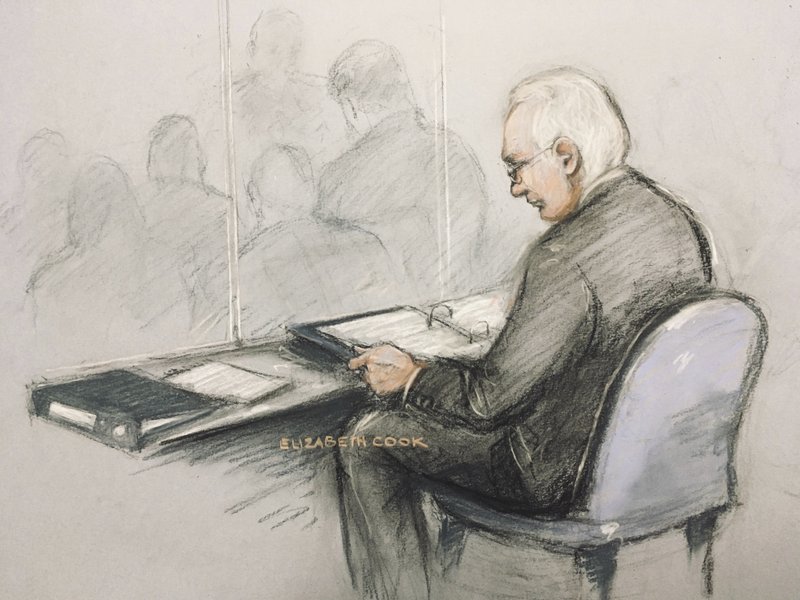 This is a court artist sketch of Wikileaks founder Julian Assange in the dock reading his papers as he appears at Belmarsh Magistrates' Court for his extradition hearing, in London, Monday, Feb. 24, 2020. The U.S. government and WikiLeaks founder Julian Assange will face off Monday in a high-security London courthouse, a decade after WikiLeaks infuriated American officials by publishing a trove of classified military documents. (Elizabeth Cook/PA via AP)

LONDON -- The U.S. government began outlining its extradition case against Julian Assange in a London court Monday, arguing that the WikiLeaks founder is not a free-speech champion but an "ordinary" criminal who put many lives at risk with his secret-spilling.

U.S. authorities want to try Assange on espionage charges that carry a maximum sentence of 175 years in prison over the 2010 publication of hundreds of thousands of secret military documents and diplomatic cables. Assange argues he was acting as a journalist entitled to First Amendment protection.

Lawyer James Lewis, representing the U.S. government, called WikiLeaks' 2010 document deluge "one of the largest compromises of classified information in the history of the United States."

"Reporting or journalism is not an excuse for criminal activities or a license to break ordinary criminal laws," he said.

[Video not showing up above? Click here to watch » https://www.youtube.com/watch?v=boECGO3f_jQ]

Assange's lawyer countered that the WikiLeaks publisher was being victimized by a "lawless" American government that wanted to make an example of him.

Attorney Edward Fitzgerald also said the "inhuman" conditions Assange was likely to face in an American prison would put him at high risk of suicide.

Dozens of Assange supporters protested outside the high-security Woolwich Crown Court, chanting and setting off a horn as District Judge Vanessa Baraitser began hearing the case, which is expected to last several months.

Assange, 48, watched the proceedings from the dock in the courtroom, brought there from Belmarsh Prison. He complained that he was having difficulty concentrating and called the noise from outside "not helpful."

Assange has been indicted in the U.S. on 18 charges over the publication of classified documents. Prosecutors say he conspired with U.S. army intelligence analyst Chelsea Manning to crack a password, hack into a Pentagon computer and release secret diplomatic cables and military files on the wars in Iraq and Afghanistan.

Assange argues the leaked documents exposed U.S. military wrongdoing. Among the files published by WikiLeaks was video of a 2007 Apache helicopter attack by American forces in Baghdad that killed 11 people, including two Reuters journalists.

But Lewis said Assange was guilty of "straightforward" criminal activity in trying to hack the computer. And he said WikiLeaks' activities created a "grave and imminent risk" to U.S. intelligence sources in Afghanistan and Iraq.

"By disseminating the materials in an unredacted form, he likely put people -- human rights activists, journalists, advocates, religious leaders, dissidents and their families -- at risk of serious harm, torture or even death," the lawyer said.

Lewis said some informants and others who had been assisting the Americans had to be relocated after the leak, and others "subsequently disappeared."

While acknowledging that U.S. authorities could not prove that anyone had been killed, Lewis said WikiLeaks' information had helped America's enemies. Documents from WikiLeaks were found in al-Qaida leader Osama bin Laden's compound in Pakistan after he was killed in a U.S. attack, the lawyer said.

Assange's lawyers argued that the U.S. charges are a politically motivated abuse of power.

Fitzgerald said Assange was suffering as a result of the "declaration of war on leakers and journalists" by President Donald Trump.

"Julian Assange has been made an example of," Fitzgerald said. "He was the obvious symbol of all that Trump condemned."

Fitzgerald said his client had been subjected to a long campaign of U.S. intrusion and harassment. The lawyer accused the U.S. intelligence services of directing a private security firm to spy on Assange while he was living in the Ecuadorian Embassy in London and said American authorities had pressured the south American country to withdraw his political asylum .

Fitzgerald said those were "the actions of a lawless state bent on adopting any means necessary to bring him down."

Assange's legal team also alleges that the Australian was offered a pardon by the Trump administration if he agreed to say Russia wasn't involved in leaking Democratic National Committee emails that were published by WikiLeaks during the 2016 U.S. election campaign.

Assange's lawyers say the offer was made in August 2017 by then-Republican Congressman Dana Rohrabacher, who claimed to be acting with the approval of Trump.

The White House has called the claim a fabrication.

Both sides in the case plan to present evidence for their allegations later in the hearing process. Fitzgerald said it was unlikely Assange would testify.