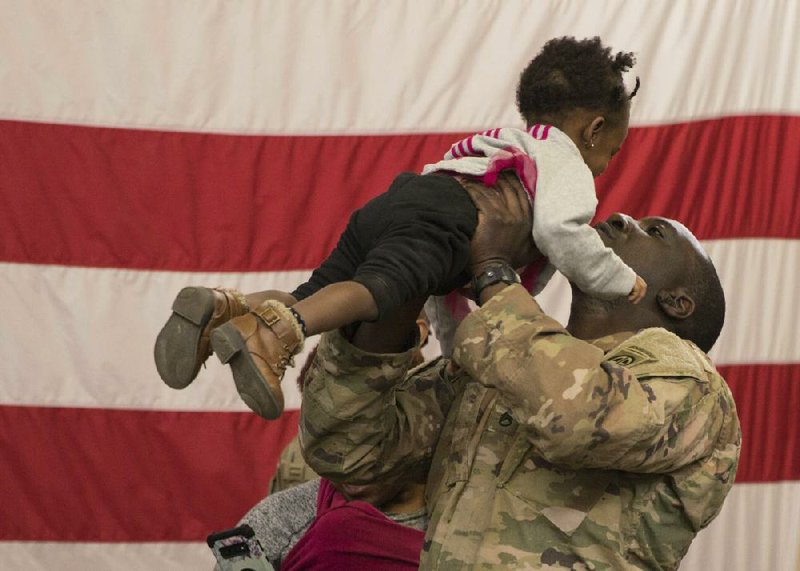 A soldier greets his daughter Thursday at Fort Bragg, N.C., as he and other members of the 82nd Airborne Division’s Immediate Response Force begin returning from a nearly two-month deployment to the Middle East to counter a threat from Iran. (AP/U.S. Army)

WASHINGTON -- The Trump administration on Thursday ratcheted up pressure on Iran by slapping sanctions on top members of a powerful clerical body that disqualified thousands of candidates from running in that country's parliamentary elections.

A day before Iranians go to the polls, the administration imposed sanctions on two senior officials of the Guardian Council, including its chief, and three members of its elections supervisory committee. Officials said those targeted were responsible for silencing the voice of the Iranian people by rejecting more than 7,000 candidates.

The penalties announced by the State and Treasury departments include freezes on any assets the five may have in U.S. jurisdictions, or that they try to move through the U.S. banking system. Also, Americans are barred from doing business with them. Brian Hook, the U.S. special envoy for Iran, said it's important to highlight the role of clerics who are not widely known outside of Iran.

The five Iranians targeted Thursday "have denied the Iranian people free and fair parliamentary elections," Hook told reporters. "Together these five official oversee a process that silences the voice of the Iranian people, curtails their freedom and limits their political participation."

Those targeted include the chief of the council, Ahmad Jannati and senior member Mohammad Yazdi. Jannati is a 92-year-old hard-line cleric who once was supporter of former President Mahmoud Ahmadinejad. Yazdi is another influential member of the council who served as the Iran's judiciary chief in the 1990s. The sanctions also affect Abbas Ali Kadkhodaei, who serves as the council's spokesman.

The 12-member Guardian Council is a panel of six clerics appointed by Supreme Leader Ayatollah Ali Khamenei and six jurists nominated by Iran's judiciary and approved by its parliament. The council approves all parliamentary and presidential candidates and must agree to all legislation passed by parliament before it becomes law. It rules out candidates if it believes their views or behavior are incompatible with Iran's theocratic system.

Ahead of today's elections, the council has barred thousands of candidates who had registered to run. Among them are 90 sitting lawmakers seeking reelection.

"The Trump administration will not tolerate the manipulation of elections to favor the regime's malign agenda, and this action exposes those senior regime officials responsible for preventing the Iranian people from freely choosing their leaders," Treasury Secretary Steven Mnuchin said in a statement.

Meanwhile, nearly two months after a U.S. Army rapid-response force was activated amid tensions with Iran, instantly deploying 3,000 soldiers to the Middle East, some are returning home.

By the end of the weekend, nearly 800 paratroopers from the 82nd Airborne Division's Immediate Response Force are expected to return to Fort Bragg, North Carolina.

On New Years Eve, an initial wave of 750 paratroopers was deployed to the Middle East within 18 hours after an attack on the U.S. Embassy in Baghdad as tensions flared with Iran.

The remainder of the 1st Brigade was deployed in the following days. The sudden deployment marked the most significant no-notice deployment of combat forces in more than 30 years.

While in the Middle East, paratroopers were on standby under the leadership of U.S. Central Command and continued readiness training.

Roughly 2,000 members of the 1st Brigade Combat Team are still deployed to the region for "any missions deemed necessary." It's not clear when the remainder will return.