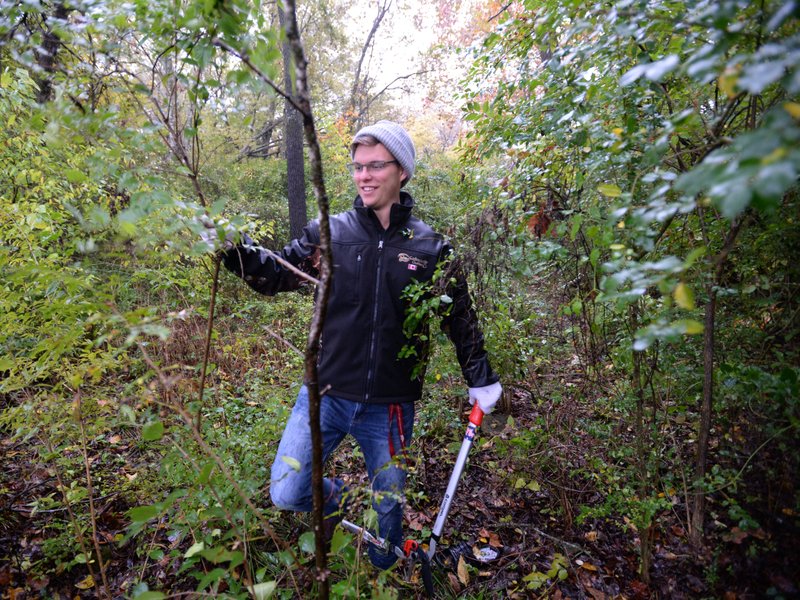 NWA Democrat-Gazette/ANDY SHUPE Ethan Anderson, a junior at the University of Arkansas from Joplin, Mo., removes bush honeysuckle Saturday, Oct. 26, 2019, from along Spout Spring Branch in Walker Park in Fayetteville while volunteering with Beaver Watershed Alliance during the annual Make a Difference Day. Volunteers from the campus community spent the day volunteering all around Northwest Arkansas as a part of the national day of community service.

FAYETTEVILLE -- Add bush honeysuckle to the list of undesirable trees with a bounty on its head in the city.

Urban foresters will offer a tree or shrub native to the city to anyone who chops down a bush honeysuckle or Bradford pear on their own property. This season will mark the second year the city has put out a bounty on invasive tree species.

Last year, the bounty solely fell upon the Bradford pear. This year, bush honeysuckle joined the fray with the hope of discouraging the spread of invasive plants, according to a news release from the city.

Bush honeysuckle, also known as lonicera maackii or fragrantissima, has its first leaves appear early in the spring, according to a list of invasive species posted to the city's website. Its leaves block light to early native bloomers. If uncontrolled, bush honeysuckle can create a monoculture, preventing forest regeneration.

The Bradford pear can quickly take over an area, and don't provide a beneficial habitat for wildlife or other vegetation. Despite the name, the trees don't grow edible pears. They bear hard, little fruits that some birds like. However, that fruit is junk food to them.

To qualify for a new tree, residents should take a picture of their cut-down Bradford pear or bush honeysuckle. The photograph can be shown to city staff during one of the native tree pickup days or emailed to [email protected]

Name, address and phone number should be included with the photo. About 50 native trees, including bald cypress, red oak, black gum and chinquapin oak, along with about 25 native shrubs, will be made on a first-come, first-served basis at the following dates and locations:

• 8 a.m. to noon April 11 at the Farmers Market on the Downtown Square.

The city will not cut down residents' trees. Foresters recommend researching the proper way to remove a tree or calling a professional service.