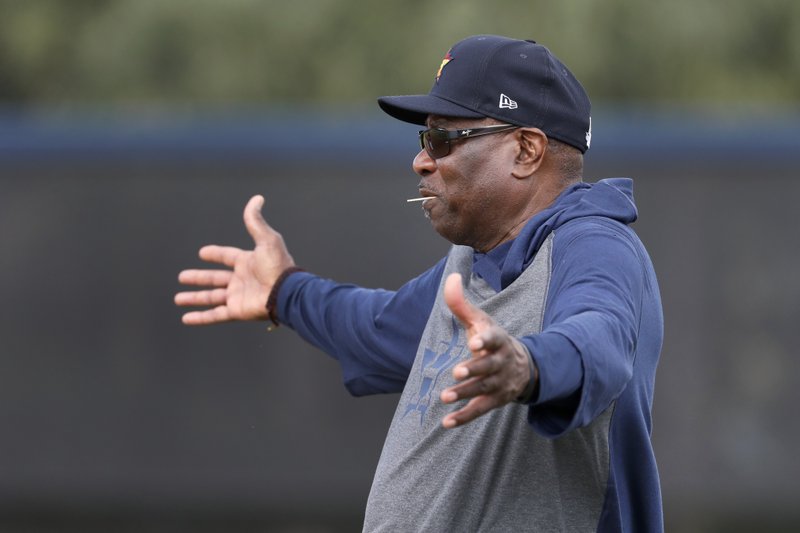 WEST PALM BEACH, Fla. -- Dusty Baker wants action from Major League Baseball: End the criticism of the Houston Astros from across baseball over sign stealing, and take steps to ensure pitchers don't throw at his players.

"It's not good for the game, it's not good for kids to see it, so I think both," the new Houston manager said Saturday. "Stop the comments and also stop something before it happens."

Baker spoke in response to a wave of harsh comments during spring training about the Astros' use of video to steal signs in 2017 and 2018. Los Angeles Dodgers first baseman Cody Bellinger said Friday the Astros "stole" the 2017 World Series title from them and adds that Jose Altuve did likewise with the MVP, denying the New York Yankees' Aaron Judge.

Houston players, management and ownership spent the first day of camp apologizing for their actions and professing remorse. But many players and front offices around the league didn't feel they went far enough.

Washington General Manager Mike Rizzo said he wanted to hear the Astros use the word "cheated" when addressing the situation.

"I'm depending on the league to try to put a stop to the seemingly premeditated retaliation that I'm hearing about," Baker said. "In most instances in life you get kind of reprimanded for when you have premeditated anything."

"The game has changed," Verlander said. "I think the commissioner has made it very clear in the past few seasons that throwing a baseball at somebody intentionally isn't an appropriate form of retaliation in the game any longer."

Verlander also said it is "wrong" to speculate that the Astros, specifically Altuve, used buzzers as part of the sign stealing.

"We were successful in the World Series last year. All that stuff about buzzers and all that stuff is simply not true," Verlander said. "People can speculate all they want. We dug our grave. We're in it. I think emphatically everybody made it very clear that that wasn't true."

Outfielder George Springer declined to speak with the media before Saturday's workout. Altuve was not in the clubhouse during the time it was open to the media but through a spokesman also declined to comment on Bellinger's remarks. Position players don't begin their first official workouts until Monday.

Verlander is concerned about the respect the Astros have lost around the league. However, he expects more revelations about sign stealing by other teams to emerge.

Could the Dodgers be one of those teams?

"I don't want to insinuate about other organizations," Verlander said. "The other day we apologized about what we did."