REVIEW: 'Once on This Island' at Walton Arts Center romantic, adventurous, powerful 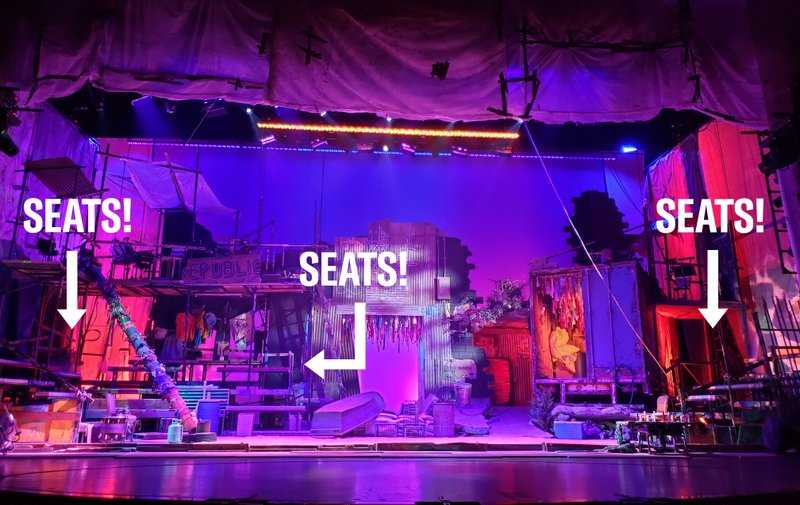 Guests have the chance to see the performance from the stage itself.

The national tour of Broadway's 2018 revival of "Once on This Island" opened at the Walton Arts Center in Fayetteville Feb. 11. I was among that opening night crowd, but from a different vantage point than I usually have among the house seats.

The revival production was produced in the round -- with audience members on all sides of the stage -- and the touring company recreates that feeling as closely as possibly with on-stage seating options. Bleacher-like seats line the back and side edges of the stage -- so close to the action, your feet are literally in the sand. Oh, there's sand, too. And fire, and rain and water seeping in from the ocean, threatening to flood the stage if the sandbags placed to hold it back do not succeed.

This is where I experienced "Once on This Island" and it felt like a magical, once-in-a-lifetime experience.

Some 15 minutes before the show even begins, the performance begins as actors are milling about the debris-strewn stage, cleaning up from the hurricane that took place the night before. They welcomed those of us sitting near them to the island, and we were able to take in the intricate details of the set. Keep an eye on some of the pieces of trash the characters pick up -- you'll see them incorporated in later costumes.

"Once on This Island" portrays the resiliency of a vibrant island community as they pick up the pieces after disaster, loss and pain. "It's the circle of life," actor Tamyra Gray told What's Up! associate editor Jocelyn Murphy during their podcast interview following the show's debut. "That's kind of what the show represents. It takes you through myriad emotions because, in life, we experience all of these things."

As the show opens, the islanders are comforting a little girl who is still frightened from the storm's lingering thunder. Her neighbors begin to recount the tail of another small island girl, TiMoune, who faced impossible obstacles to follow her heart.

The scene, and some of the characters, transform to that long-ago time when TiMoune was rescued from a flood by the gods who rule the island. The island is divided by color -- the light-skinned Grand Hommes luxuriating on one side of the island behind their protective gates, and peasants with skin "black as night," live at the mercy of the gods as they try to survive. When TiMoune rescues one of the wealthy men after a car accident and nurses him back to health, her love for him inspires her to unite the two sides of the island.

Along TiMoune's journey, the gods manipulate, guide and provide for her, adding touches of magic to the beautiful show. The costumes, music and dancing transport you straight to the Caribbean and the islanders' joy and resilience, even in the face of devastation, is infectious. The acting is incredible -- Tamyra Gray (Papa Ge/demon of death), Jahmaul Bakare (Agwe, god of water), Kyle Ramar Freeman (Asaka, mother of the earth) and Cassondra James (Erzulie, goddess of love) were all knockouts. Tony and Grammy Award nominee Phillip Boykin (Tonton Julian) was a particular delight and Courtnee Carter (TiMoune) brought a lovely blend of childlike wonder, courage and romance to the part.

Sitting on stage, amid the actors and very near to the on-stage musicians, I will admit some words during some of the songs were lost to me. But I don't feel I sacrificed anything from my special viewpoint and, in fact, felt completely immersed in the world of the island. What's more, the on-stage seats are a steal at $25 -- cheaper than any seats in the house!

"Once on This Island" is showing at the Walton Arts Center through Feb. 16. The show is approximately 90 minutes long, with no intermission, and is recommended for ages 10 and above. The show won the 2018 Tony Award for Best Revival of a Musical and it feels incredibly special we have such a beautiful piece of theater available to us in Arkansas, straight from Broadway on its first run. I hope readers will give this romantic, adventurous, powerful show a chance.

‘Once on This Island’

BONUS — On-stage tickets are available. These seats offer a side/rear view of some of the performance as they are on the sides of the stage.

FYI — The performance runs approximately 90 minutes without an intermission.