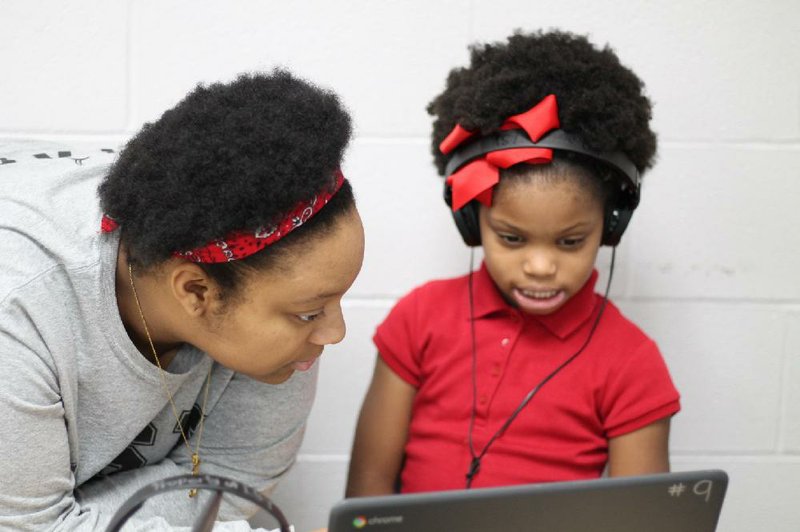 Zoey Cox, a first-grader at Romine Elementary School in Little Rock, receives help with a laptop from Tera Johnson, of Life Skills for Youth. Johnson, a former student of the after-school program, is currently one of its life skills coaches.

Thirty wriggling, chattering elementary school children in a foyer of Little Rock's South City Church formed the makings of a line at 20 minutes to 3 p.m. on a recent Tuesday.

Eloise Propps, site director of the mentoring program Life Skills for Youth Inc., walked through the space, threading through the students still arriving from their respective schools as she commanded attention.

More information about Life Skills for Youth is available at lifeskillsforyouth.org or facebook.com/lsy.org.

The children, from several Little Rock elementary schools, were the first age group to arrive for that day's session of Life Skills for Youth, which serves Pre-K through 12th grade and whose mission is to "mentor, equip and empower youth to pursue a greater purpose for themselves and their community."

Larry Clark, the program's executive director, founded Life Skills in 2006. Clark had been coaching American Youth Football when he began to notice differences in the families and youngsters from those he taught in years past.

"I was seeing the parents getting younger and younger ... kids walking in between adults, no one saying 'Excuse me' or 'Pardon me,'" Clark said.

He also began to wonder about students' grades. A former wide receiver for Arkansas Tech University, Clark grew up a student-athlete and was used to balancing sports and academics. He and his wife, Tammy, have two sons, Larry Jr. and Sean, who did likewise and graduated from Washington and Lee University in Virginia and Arkansas State University, respectively.

He gained permission from the Boys & Girls Club of Central Arkansas to pilot the program in 2006 at the Billy Mitchell Boys & Girls Club in Little Rock. Life Skills for Youth was a newly minted nonprofit in 2007 by the time it moved to lease space for the program from Temple Baptist Church, which was replanted in 2017 as South City Church.

These days, Clark, a software engineer for Arkansas Blue Cross and Blue Shield for more than 30 years, works a shift that ends most days by 2:30 or 3 p.m. before he heads over to South City Church until the program closes for the day at 7 p.m.

After attendance is taken and the elementary-age children have had an after-school snack, they're off to upstairs rooms of the church's Family Life Center, where, separated by age groups, there's time to complete homework, and older students arriving take part in physical activities in the center's gymnasium. All age groups are given dinner before the day's program ends at 7 p.m.

Drew Cline, lead pastor of South City Church, said that although the program is not a direct ministry of the church, he considers Life Skills for Youth to be its closest mission field. Among other efforts, a South City staff member volunteers to teach Bible study on Wednesday evenings for students who -- with their parents' or guardian's permission -- choose to take the class. Around 15 volunteers also take time during the summer to teach a Vacation Bible School for more than 200 students.

"Our hope is that other churches would do something like [Life Skills for Youth]," Cline said. "In a culture that's extremely divided, one thing we feel called to is to be a voice in the craziness ... one of the things that's a living expression of diversity. I love [the kids], our church loves them, and it's an honor that we get to have them here." 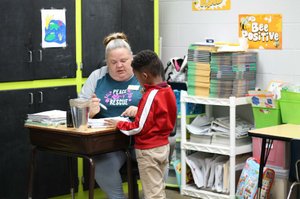 Photo by Arkansas Democrat-Gazette/Francisca Jones
Debbie Thai (left) helps Jacardan Lewis, 6, with his arithmetic at Life Skills for Youth, an after-school program, in the Family Life Center of Little Rock’s South City Church, on Monday. The program, which also features Saturday and summer portions, takes a multidisciplinary approach to helping students excel in academics and skills they’ll need for life. 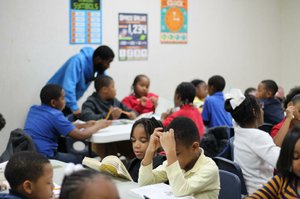 Photo by Arkansas Democrat-Gazette/Francisca Jones
Students in the Life Skills for Youth program led at South City Church in Little Rock read, study, and tackle homework with the supervision and guidance of staff such as T’Carlin Jones (standing), an assistant coordinator for the program.

Print Headline: Help from above