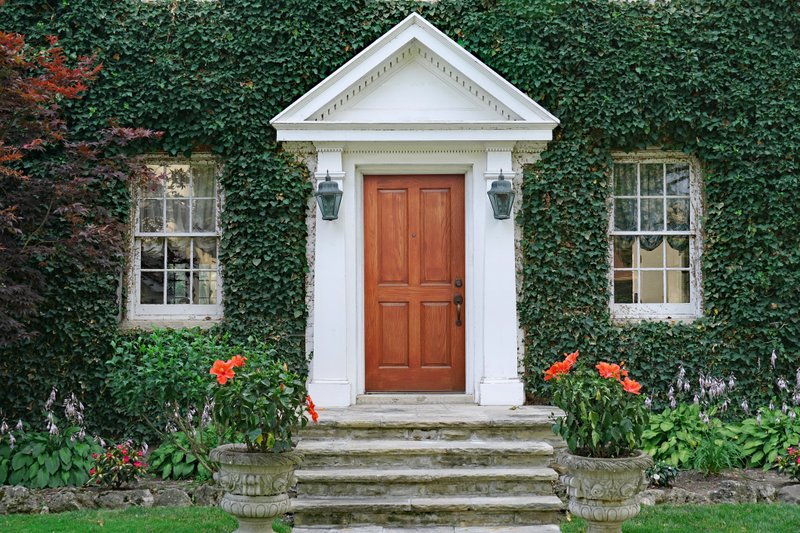 Though creeping ivy drives some home gardeners up the wall and can damage wood and stucco, when properly maintained, it can also add charm, grandeur and a sense of timelessness to a home and landscape. (Courtesy of Spiroview for Dreamstime)

I never knew so many of you cared. After sharing the landscape plan for my backyard a few weeks ago, many armchair landscapers among you wrote to warn me about the woes of palm trees, bamboo and fig ivy. And you didn't even know yet about the fake grass.

Poor Tony Evans. My landscape designer thought when he was getting his degree in landscape architecture, that defending his designs before his professors would be his toughest test. That was nothing compared to facing my readers' court of opinion.

The palm tree matter resolved handily. Tony had proposed a triangle of queen palms to create a shade canopy over the outdoor table. However, palm trees are not allowed in our community. Apparently, they didn't fit the developer's vision, I learned when I ran my plan by the architecture review committee. No problem. We will plant crepe myrtles instead. (Yes, I know they drop.)

As for the bamboo trees planned for the side wall, my initial reaction matched Gene's, a reader from Campbell, Calif. His actual comment was "Bamboo? Ugh." When I lived in California, I remembered bamboo as being very invasive, but, Tony assured me, the type he proposed stays put. It clumps and doesn't send runners to spread. I have been in several Florida homes where bamboo trees create a welcome privacy screen, just what we want between us and our neighbors. I'm sticking with the plan.

The thought of fig ivy really drove readers up the wall. "It's because I love you so much that I have to write and warn you about the dreaded fig ivy that you plan to plant on your garage wall," wrote Marjorie, from Orlando. "Assuming that you are talking about creeping fig ivy, run as fast as you can from it!"

"It will damage paint and wood. It will become a monster," she continued. "It starts out as a beautiful little lacy leaf, but the leaves get bigger and the vine gets woodier. Then, if you don't constantly prune it, it grows into a hedge. ... That's not all. It creeps into everything."

I forwarded her note to Tony, who, to be fair, had mentioned that the ivy would need maintenance and could be hard on stucco, and said fake fig ivy was an option, which sounded, well, fake. With the exception of Christmas trees, which we've discussed, I'm not a fan of fake botanicals.

Meanwhile, all around me are handsome houses with beautifully maintained ivy walls. So the jury is out.

Now Pat, from Santa Clara, is in luck. She is considering re-doing her front yard, she writes. "I would love a discussion of the pros and cons of artificial turf. (Probably too much to ask!)" Not at all, Pat.

Tony actually presented that option. My antennae shot up like crabgrass: "Fake grass?" I said, to make sure I'd heard right.

"You'd be surprised how nice it looks," he said.

"When I think of Astroturf, I think of the Putt-Putt golf course," I say, and feel my face screw up the way it does when I smell something bad.

"First, you have to stop calling it Astroturf," he said. "It's artificial turf."

"I'm not talking about the cheap, plastic-looking grass," he said. "The good stuff looks very real. It even has some brown blades woven in."

"Isn't the point to not have any brown?" Some things I will never understand.

"I love the idea," my husband, DC, chimes in. "No watering, no mowing, no maintaining, no mud, no lawn-service bills. How much would it add to the project?"

He almost had me with the no mud, a constant battle at our back door. DC was sold. But I wasn't. Tony and I take a walk to visit two houses that have artificial turf. I look. I walk on the lawns barefoot.

"It looks good but fake."

This might shock you, but I am capable of changing my mind. I was trying to like it. I surveyed friends who told me that in desert climates, such as Arizona, and places with a lot of mud (Washington state), artificial turf was gaining ground.

As my mind creaked open, I ran the idea past a member of our community's ARC, who said the committee had never allowed artificial grass in front yards. However, for a backyard, they might be more lenient. I was welcome to submit the request.

That said, artificial turf may be a great choice for other homes, including Pat's. As I looked into the pros and cons, here's what I learned:

Looks. Today's synthetic grasses come in a range of blade lengths, colors, and textures (including variegated strands), and are hard to distinguish from natural grass.

Maintenance. Artificial grass requires no weeding, mowing, watering or fertilizing. Your house will stay cleaner, as you eliminate mud. However, unlike natural grass, the synthetic variety needs to be cleaned periodically.

Environmental impact. Although easier on the environment in some respects because it saves water; eliminates pollution from mowers, edgers and blowers; and doesn't require chemical pesticides or fertilizers, artificial turf is a petroleum-based product that creates pollution and waste when it's made. Because it's not biodegradable, it will, after many years, end up in a landfill.

Feel. Though many love the foot feel, turf fields heat up and can get much hotter than real grass.

Cost. Artificial turf costs about four times more than regular grass, Tony said. Some estimates say once you factor in the savings of no maintenance, you will recoup the cost in seven or eight years.

Armchair landscapers, for a future column, please weigh in on fake, real or no ivy, and pool or no pool.

Syndicated columnist Marni Jameson is the author of five home and lifestyle books, including the just-released Downsizing the Blended Home — When Two Households Become One (Sterling Publishing, Dec. 2019).

Print Headline: Artificial turf worth a look for yard makeovers