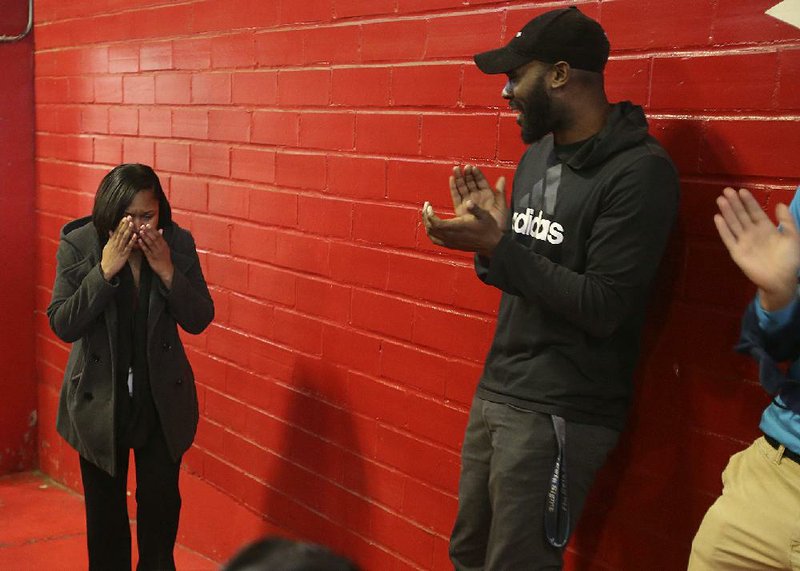 PINE BLUFF -- What began as an ordinary day turned into anything but ordinary for Pine Bluff High School art teacher Shalisha Thomas.

Officials named her a Milken Educator Award winner -- the only one from Arkansas for 2019-2020 and one of up to 40 nationwide. The award winner's name, a closely guarded secret right up to the moment of the actual announcement, was delivered by state Education Secretary Johnny Key and Milken Family Foundation senior program director Greg Gallagher during an assembly attended by some 750 students and teachers.

In addition to the recognition from the award, dubbed as the "Oscar of Education" by Teacher magazine, Thomas received an unrestricted $25,000 prize to use in any way she chooses.

In a student assembly that was part pep rally and part award ceremony, Gallagher talked up the importance of recognizing outstanding educators and explained why the Milken award was created.

"Research and our personal experience tells us that the single most important educational element determining how much you will learn in school is the quality of the teachers that you encounter each year," Gallagher said. "Great teachers make a difference."

He said society celebrates excellence in sports, entertainment, science and medicine, but he said educators historically have not been celebrated in the same way.

[Video not showing up above? Click here to watch » https://www.youtube.com/watch?v=TMdICHLg6kw]

The Milken Educator Awards, created by the businessman, philanthropist and co-founder of the Milken Family Foundation, were first presented in 1987. According to a news release, the awards provide public recognition and individual financial awards of $25,000 to elementary and secondary school teachers, principals and education specialists from around the country who are furthering excellence in education.

Thomas said she was overwhelmed by the experience.

"Today is going a lot differently than I thought it would," she told reporters at the conclusion of the assembly. "I'm just taking it all in. It feels a little surreal right now."

Thomas said that when she walked into the assembly at 10 a.m., she expected it to be a routine assembly where students and teachers would be provided with information and then return to class. When she realized that a teacher was about to receive the Milken Award, she said she was excited that a teacher at her school had been selected and she was preparing to cheer the winner.

Then, the winner's name was announced, and the name called was hers.

"Then the whole day changed," she said.

Thomas, who earned a bachelor of science degree in art education in 2012 from the University of Arkansas at Pine Bluff, and has been teaching for eight years, was praised by administrators and students alike for her work ethic, her dedication to her students and her skills in managing a classroom.

Bryagm Jones, a junior at Pine Bluff High School, said he is in his fourth year in Thomas' art class, having been assigned to her class in sixth, seventh, and 10th grades, and now 11th grade.

"She's hardworking and strives to show up at work and give it her all," Jones said. "I appreciate her for everything she's taught me. I've had her for four years and she's always dedicated to doing her best. I give her my undivided attention because I know what she goes through every day with all these kids, so I try to give her my all every time."

Reginald Wilson, interim principal at Pine Bluff High School, called Thomas a great example of the best the teaching profession has to offer.

"She stays late, she comes early, they have their art projects she works with them on," Wilson said. "They have their personal projects that she works with them on. She has wonderful classroom management and she just opens her students' eyes to the field of art and the relaxation that comes with it, the creativity that comes with it. She's fantastic."

The Pine Bluff School District was placed under state control in September 2018 for fiscal and academic distress, and Thomas' award, Wilson said, will help bring some positive attention to the gains that have been made.

"People don't realize that we are really a diamond in the rough," he said. "We are starting to polish, we are starting to produce, and Pine Bluff will be a school that is noted for wonderful, positive things. And she is part of that start."

"The way she cares for our students and the way she works long hours to make sure she's prepared, she's a great example of the cadre of teachers we have in the district," he said. "For her to be recognized for her great contributions to the education environment here is tremendous."

Owoh said the award demonstrates that, despite the school district's problems, the district and its teachers are focused on providing a quality education to students.

"Having a teacher recognized for this showcases that a district may have issues, may have certain segments that needed to be addressed, fixed, and changed, but that doesn't negate the quality of education that the district prepares and gives our students each and every day," he said. "She is a great example of the quality of education that we have so, even as a district that is under state takeover, we still are ensuring that we deliver the very best education to our students."

Asked what she plans she had for the $25,000 prize, Thomas said she was still trying to take it all in.

"Right now it's going into a savings account until I can figure it out," she said with a laugh. "Until I can make some wise, adult decisions."