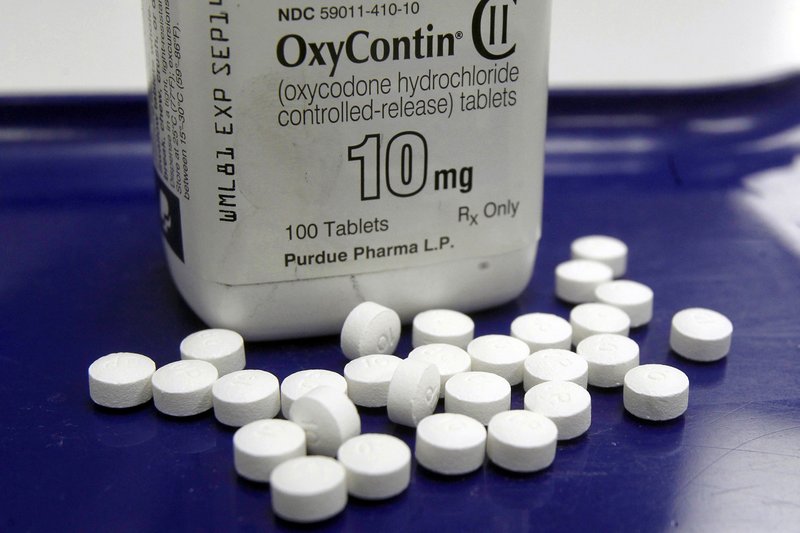 FILE - This Feb. 19, 2013, file photo shows OxyContin pills arranged for a photo at a pharmacy in Montpelier, Vt. Robert Drain, the judge overseeing the bankruptcy of OxyContin maker Purdue Pharma, is known for his deep experience handling big, complicated corporate cases. He will decide whether to approve a potentially $12 billion plan to settle more than 2,700 lawsuits over Purdue Pharma's role in the nation's deadly opioid crisis. (AP Photo/Toby Talbot, File)

FAYETTEVILLE -- A group of 15 Arkansas hospitals has followed hundreds of hospitals around the country and filed a civil suit in Washington County Circuit Court against manufacturers, distributors and retailers of opioid-based drugs.

The hospitals' complaint alleges negligence, fraud and civil conspiracy by the defendants, which include Purdue Pharma, Johnson & Johnson, Abbott Laboratories and more than 40 other companies and individuals involved in the manufacturing, distribution and sales of prescription opioids.

A special procedure in which federal civil cases from around the country are transferred to one court. The cases must have one or more issues to be determined in common. One judge manages the litigation during the pretrial and discovery process. If a case does not settle or is not dismissed during multidistrict litigation, it is sent back to the original court for trial.

The lawsuit was filed Jan. 14 and amended Jan. 27. The defendants haven't filed an answer.

Hospitals in Fayetteville, Jonesboro, Siloam Springs, Forrest City and other areas of the state are parties to the lawsuit. Between 2000 and 2016, the drug overdose rate in Arkansas rose from 5.4 per 100,000 people to 14 per 100,000, according to the lawsuit. The companies that make, market and sell opioids engineered a dramatic shift during that time in how and when opioids were prescribed and used, according to attorneys who filed the lawsuit.

"In 2018, there were more opioids dispensed in the state than there are Arkansas residents," according to the lawsuit. "Arkansas' opioid use rate was 102.1 per 100 people, which is almost double the Center for Disease Control's determined national average of 58.7 per 100 in 2017. Every county in the state is over this national average, with the most opioids distributed in Poinsett" County.

The drug companies organized a scheme to overstate the benefits and trivialize the risk of long-term opioid use and minimized the risk of dependence among patients who used opioids to treat chronic pain, according to the lawsuit.

"Other than the patients who have experienced devastating and often lethal consequences, hospitals were the most direct victims of this conspiracy," said Thomas Thrash, attorney with Thrash Law Firm in Little Rock.

One study found an average hospital stay for a patient with an opioid-related condition cost about $28,000 and only about 20% were covered by private insurance, according to attorneys.

The lawsuit seeks compensatory and punitive damages to be determined.