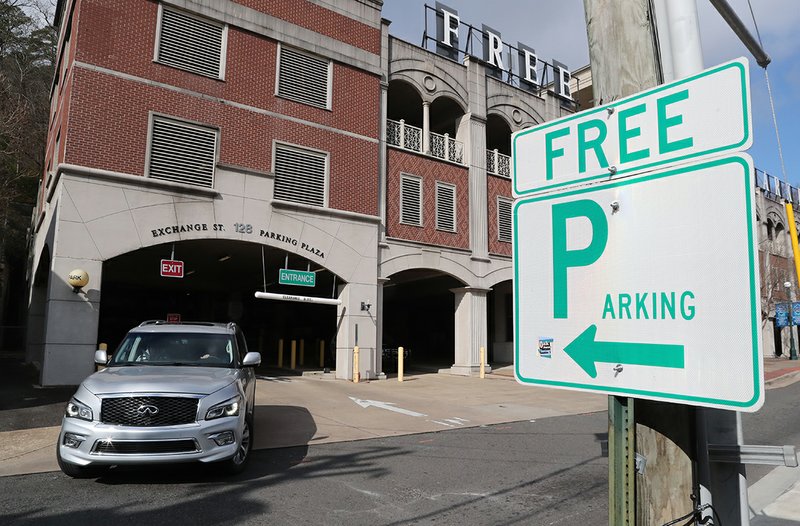 HOT SPRINGS -- Parking scarcity downtown is an indicator of the area's economic and social vitality, the committee appointed to recommend parking policies to the Hot Springs Board of Directors said last week.

Downtown Business District Parking Advisory Committee member Mark Fleischner said it's a good problem to have, considering the commercial and capital flight that was once prevalent downtown, but that it's a problem nonetheless.

"Parking at some point was the least of our problems, because we didn't have anybody coming down there," he told the board. "But now we have this great problem, and the situation needs to be remedied rather rapidly."

The report the seven-member committee presented to the board looked at ways to reconcile an increased demand for downtown parking with a static and scattered supply. Deputy City Manager Lance Spicer told the board competition for spaces during peak times can overwhelm a total inventory of 1,700 to 1,800 spaces.

"We've got approximately 700 to 1,100 employees during peak and off-peak season needing parking in the downtown throughout the day," he said. "If everybody showed up all at once, obviously, you've got a fight on your hands. So coming up with an employee parking solution was probably the most direct thing [the committee] wanted to review and make some recommendations on."

The committee recommended a parking permit program for people who work downtown, allowing them to access public and private spaces that don't get regular use. The plan would be contingent on negotiating agreements with private lot owners that avoid cost-prohibitive parking for employees, Spicer told the board.

"You want the employees to be able to procure permits at a rate that won't adversely impact them," he said. "That's one of the things you don't want to do is to make it where it's almost impossible to park or work in the downtown if you are an employee."

The committee recommended the city consider forming a parking authority, a self-contained body with revenue, operating costs and debt service separate from the city. Its power to impose parking fees, issue debt secured by revenue from those fees and condemn and purchase land for additional parking could increase inventory and finance the long-term recommendation of building a parking garage on Hill Wheatley Plaza.

The report said a 250-space facility could be built for $4.5 million. Spicer showed the board an image that overlaid the dimensions of the multilevel Exchange Street Parking Plaza over the Hill Wheatley space. The dimensions overlapped much of Bill Clinton Park, but the city said the park could be preserved by relocating the visitor's center on the south end of the lot.

The city said the recommendation to expand and upgrade paid parking could provide the seed money and revenue history an authority would need to secure debt for new facilities. Technology directing users to open spaces and allowing them to electronically pay rates based on demand could replace the city's 1970s-era coin-operated meters that generate about $80,000 to $90,000 a year.

Spicer said the city is considering upgrading its existing 275 meters and expanding paid parking to the Exchange Street facility's 235 spaces. A turnaround area at the top of the structure is a committee recommendation the city has already implemented, giving drivers who can't find a space an easier way to exit.

The city said more than 1,200 vehicles entered the structure during Memorial Day weekend.

It has estimated the spaces could generate up to $500,000 a year in revenue.

Short term recommendations the city expects to bring before the board include ordinances allowing double parking in the downtown business district between 6-11 a.m. and changing state parking violations on Central Avenue to city violations.