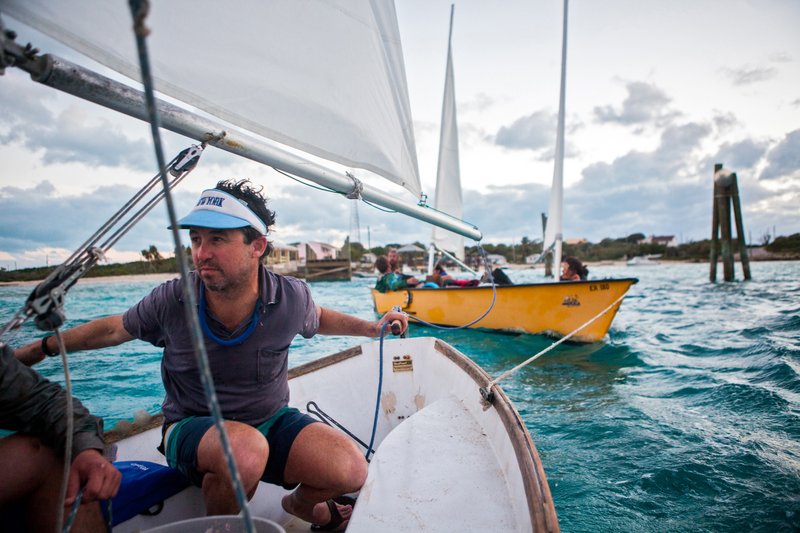 The author and friends set sail from from Little Farmer's Cay to Big Farmer's Cay in the Bahamas' Exuma Islands, a chain of 365 islands. (The New York Times/Sara Fox)

Thick emerald waves broke over a quarter-mile-long sandbar, blocking our way. A few hundred yards east, whitecaps crashed across Exuma Sound — a 6,000-foot-deep abyss of rolling swells and powerful trade winds that would likely flip our tiny sailboats. Beyond the sandbar, we could see the tranquil flats of the Exuma Bank and the protected beach where we hoped to camp the first night of the trip. We just had to get around the bar before dark.

A shadow flashed under the hull — a four-foot-wide stingray searching for food in the ebbing tide. Two needlefish jetted from the water and nearly landed in the cockpit. The water was so clear, it was like looking through a glass-bottom boat at coral heads, patches of seagrass and conchs passing by on the ocean floor.

Zach Tucker sailed the second boat in our armada alongside. He was relatively new to sailing but had proved a natural at the helm. We each carried three friends from Brooklyn, along with enough food, water and rum to last a week in the Bahamas' Exuma Islands. This was my second trip through the islands on the 21-foot "expedition sailboats" that Out Island Explorers rents from its base on Great Exuma Island. After searching for a Bahamas vacation free from the confines of a cruise ship, all-inclusive resort or even traditional sailboat charter — where the staff goes to great lengths to shield guests from the raw natural beauty of the islands — I'd found Out Island's sail-camping journeys and set out to explore the Caribbean-pine fringed cays, deserted beaches, backwater fishing villages and pristine coral reefs of the Exumas.

We opted for the unguided package on this trip — guided trips are possible as well — that would include long days of navigating by map and compass around windswept atolls, longer nights sitting around a campfire, spearfishing dinner, sleeping in tents on the beach and generally living a Robinson Crusoe existence, minus the cannibals, captives and (hopefully) mutineers.

As the sun disappeared over the flats and light drained from the sky, I signaled to Zach to tack his boat toward Harvey's Cay so we could get around the sandbar. Celebratory cocktails were stashed. A few life jackets appeared in the cockpit. Then, just as a half-moon lifted off the water, a dark blue channel cutting through the sandbar appeared. The wind held long enough for the boats to slip through, and a half-hour later we were sailing a rhumb line for the beach.

Cocktails re-emerged. A pool of silvery moonlight gathered around the boats. The silhouette of Zach's sails looked like black shears jutting up from the ocean. There were no lighted pathways or cabanas onshore, no host preparing sashimi or DJs spinning tunes. There was only our wide-eyed group of friends, two coolers of ice, a heap of frozen food we'd brought from the States, camping gear and a portable radio to play Bahamian rake-and-scrape hits on whatever radio station we could tune in. 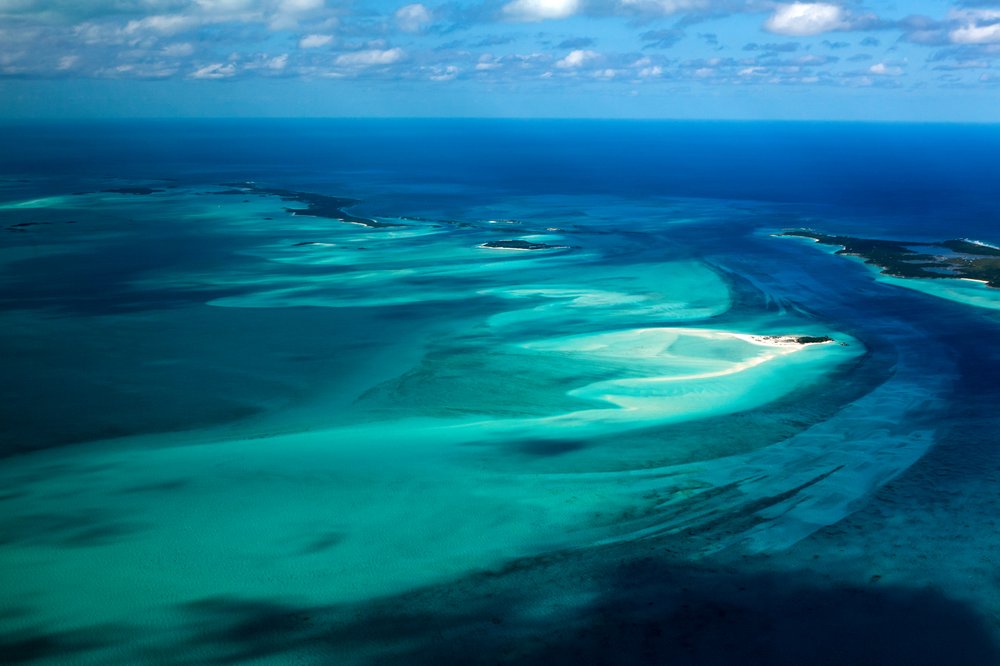 The Bahamas' Exuma Islands are surrounded by brilliant blue ocean waters. The shallow waters prevent an influx of cruise ships to this more remote area. (The New York Times/Sara Fox)

"It was country as unspoiled as when Columbus came to this coast," Ernest Hemingway wrote in Islands in the Stream about living on Bimini Island in the Bahamas in the 1930s. A local on Little Farmer's Cay explained the pristine nature of the islands another way. "Anything you build will eventually get swept away," he said, pointing to the ruins of four cabanas he owned that were destroyed by a hurricane years before.

In September, many months after our trip, Hurricane Dorian would do just that, blazing a path of destruction across the Abacos and Grand Bahama. The Exumas — a north-south string of some 365 sand-fringed cays between Nassau and Long Island — were largely spared.

March is, thankfully, well outside of hurricane season, so the greatest danger we faced on the trip was running aground on the many sandbars on the Exuma Bank. (The word "Bahamas" is a derivation of the Spanish "Baha Mar" or "shallow seas.") The neck-deep flats extend more than 2,000 square miles from the western shores of the Exumas — putting most of the beaches we would camp on beyond the reach of deep-draft cruise ships, yachts and pretty much everything else except local fishing skiffs and our expedition boats.

Capable of sailing, fully loaded, in 18 inches of water, the Sea Pearl is a one-of-a-kind craft. Two Sunfish-style sails make the boats highly maneuverable and quick on a reach or running downwind. You don't have to worry about dragging anchor either. At night, we pushed the boat 10 feet offshore, tossed an anchor off the stern and tied the bowline to a tree. 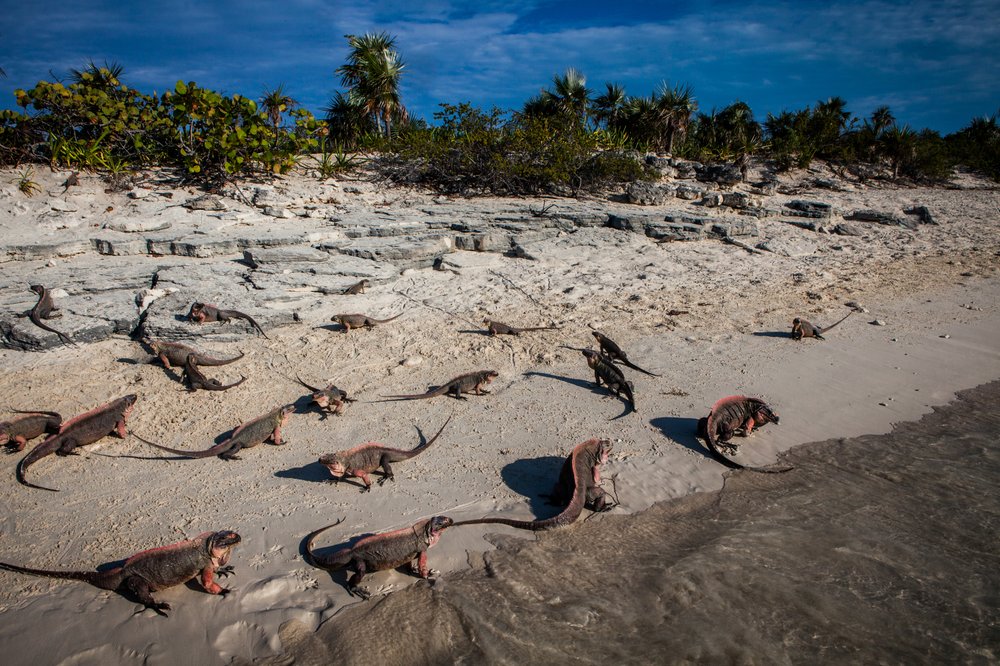 Iguanas form a greeting party at Bitter Guana Cay, in the Bahamas' Exuma Islands. A group of friends spent a week on an unguided journey around the Exuma Islands. (The New York Times/Sara Fox)

For $1,350, Out Island Explorers will supply four passengers with a boat, tents, sleeping bags, mattresses, a cook set, propane, Yeti coolers, water containers, chairs, a Hawaiian sling spear gun and everything else you need to survive a week in paradise. All we had to do was fly into the Staniel Cay airport, pull up the sails and push off into the sunset. A week later, we would end our one-way trip 80 miles south on Great Exuma Island and fly home.

We didn't have to look for nature our first morning on Bitter Guana Cay. It came waddling over to us in the form of 3-foot-long Exuma Island iguanas. Six of the ancient, endangered lizards watched intently as we made coffee and wandered down the snow-white beach for a morning swim.

Eight ring-billed gulls circled and screeched while we packed the boats two hours later and headed out to sea again. Flat green islands hovered offshore, and an endless canvas of shallows, colored aquamarine by shifting arcs of sand, reached to the horizon. Trade winds blew from the northeast, but the water on the bank, protected by the islands, was perfectly flat. After a lifetime of sailing and captaining boats — and avoiding shallow water at all costs — I watched in awe as the Sea Pearls plowed through knee-deep water at 7 mph.

The boats are surprisingly similar to the dugout canoes used by the first inhabitants of the Exumas, the Lucayan Taino, more than 1,000 years ago. The earliest history of the tribe was recorded by the first — and most infamous — Western sailor in the Bahamas, Christopher Columbus, who is said to have landed in the New World on San Salvador Island, 100 miles east of the Exumas. 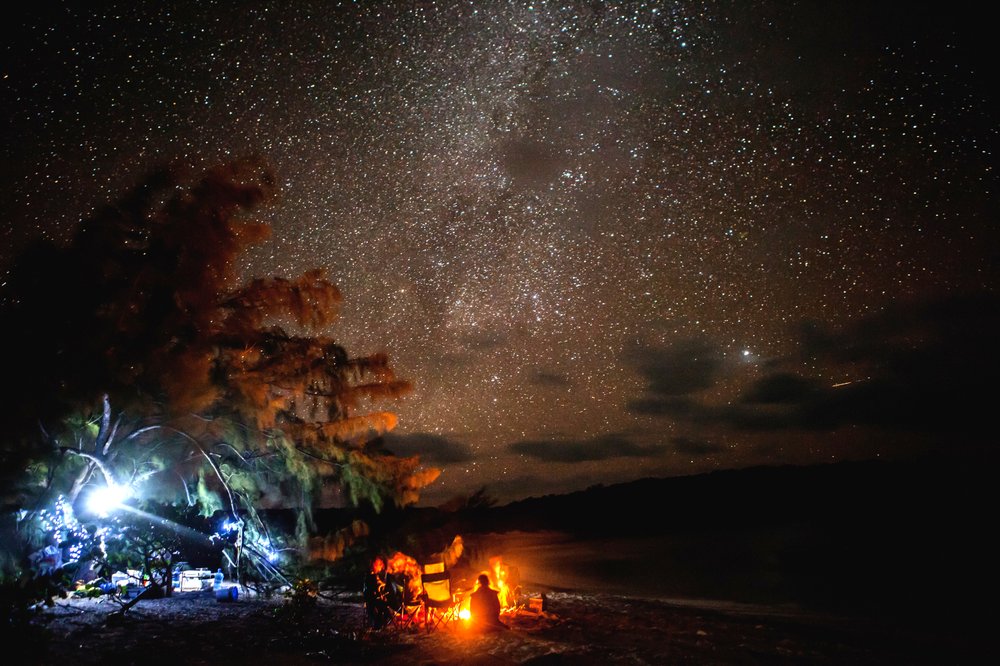 Friends sailing their way around the windswept atolls of the Bahamas' Exuma Islands spend a night camping beneath the stars. (The New York Times/Sara Fox)

We glimpsed the dark blue depths of Exuma Sound as we sailed around the northern tip of Great Guana Cay. We had planned a short day on the water and passed a half dozen beaches — too big, too small, too breezy, not quite dreamy enough — until we found the perfect one, framed by palmettos, casuarina evergreens and, on the opposite side of the island, a Bahamian lobster-filled inlet.

The scene 500 yards away on the shores of Exuma Sound was the inverse of the west. School-bus-size waves smashed into a razor-sharp lattice of limestone sea cliffs. (Sailors call it "ironbound" because it is so impossible to land on.) We didn't need the Hawaiian sling for the first lobster — we caught it sauntering down the beach 10 feet from the water. The next two monsters — each, more than 2 feet long — required 40 minutes of skin diving.

We fell into a groove for the next few days, fully embracing #castawaylife. We made breakfast tacos with fresh lime and a cabbage-carrot slaw, washed dishes in the shallows, swam, read, meditated, stretched, swam again, reset the anchors and made plans to simplify our lives when we got home.

One afternoon we visited Terry Bain — the owner of the cabanas that had been washed away in a hurricane, and maker of the best piña coladas in the Bahamas — at his Ocean Cabin Restaurant & Bar on Little Farmer's Cay. We were halfway through the trip, and he resupplied us with water, ice, rice, rum, cigars, cooking oil and a dozen tomatoes that his wife, Ernestine, wrapped individually in paper towels. That night we made camp on a half-mile-long beach across the bay on Big Farmer's Cay, stringing up solar Christmas lights in the palm trees and watching ballyhoo and jacks jump along the shoreline, their silvery scales reflecting flashes of moonlight.

For more information on Out-Island Explorers sailing and other adventures, visit outislandexplorers.com.