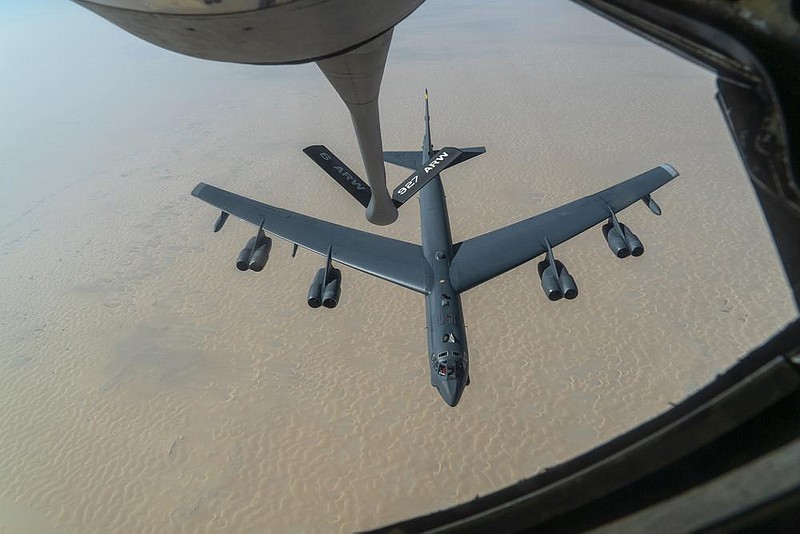 An Air Force B-52H bomber from Minot Air Force Base, N.D., approaches a KC-135 for in-air refueling Wednesday above the Persian Gulf. Two strategic bombers flew over the Persian Gulf on Wednesday for the second time this month in what a senior military officer said was a response to signals that Iran may be planning attacks on U.S.-allied targets in the region. (AP/U.S. Air Force/Senior Airman Roslyn Ward)

WASHINGTON -- The United States flew strategic bombers over the Persian Gulf on Wednesday for the second time this month, a show of force meant to deter Iran from attacking American or allied targets in the Middle East.

One senior U.S. military officer said the flight by two Air Force B-52 bombers was in response to signals that Iran may be planning attacks against U.S. allied targets in neighboring Iraq or elsewhere in the region in coming days, even as President-elect Joe Biden prepares to take office. The officer was not authorized to publicly discuss internal assessments based on sensitive intelligence and spoke on condition of anonymity.

The B-52 bomber mission, flown round trip from an Air Force base in North Dakota, reflects growing concern in Washington, in the final weeks of President Donald Trump's administration, that Iran will order further military retaliation for the U.S. killing last Jan. 3 of top Iranian military commander Gen. Qassem Soleimani. Iran's initial response, five days after the deadly U.S. drone strike, was a ballistic missile attack on a military base in Iraq that caused brain concussion injuries to about 100 U.S. troops.

Iran, however, has appeared wary of Trump's intentions in his final weeks in office, given his focus on pressuring Tehran with sanctions and other moves that have further damaged the Islamic Republic's economy.

"Trump will bear full responsibility for any adventurism on his way out," Iran's foreign minister, Javad Zarif, wrote on Twitter Dec. 24.

Adding to the tension was a Dec. 20 rocket attack on the U.S. Embassy compound in Baghdad by Iranian-supported Shiite militia groups. No one was killed, but the volume of rockets fired -- possibly 21, with about nine landing on the Embassy compound -- was unusually large. Days later, Trump tweeted that Iran was on notice.

"Some friendly health advice to Iran: If one American is killed, I will hold Iran responsible. Think it over," Trump wrote Dec. 23. He added, "We hear chatter of additional attacks against Americans in Iraq."

Because of the potential for escalation that could lead to a wider war, the U.S. has sought to deter Iran from additional attacks. Strategic calculations on both sides are further complicated by the political transition in Washington to a Biden administration that may seek new paths to dealing with Iran. Biden has said, for example, that he hopes to return the U.S. to a 2015 agreement with world powers in which Iran agreed to limit its nuclear activities in exchange for the lifting of international sanctions.

In announcing Wednesday's bomber flight, the head of U.S. Central Command said it was a defensive move.

"The United States continues to deploy combat-ready capabilities into the U.S. Central Command area of responsibility to deter any potential adversary, and make clear that we are ready and able to respond to any aggression directed at Americans or our interests," said Gen. Frank McKenzie, the commander of Central Command. "We do not seek conflict, but no one should underestimate our ability to defend our forces or to act decisively in response to any attack."

He did not mention Iran by name.

In advance of the announcement, the senior U.S. military officer who spoke on condition of anonymity said that U.S. intelligence has detected recent signs of "fairly substantive threats" from Iran, and that included planning for possible rocket attacks against U.S. interests in Iraq in connection with the one-year anniversary of the Soleimani killing.

The U.S. is in the process of reducing its troop presence in Iraq from 3,000 to about 2,500. Trump ordered that the reduction be achieved by Jan. 15; officials say it is likely to be reached as early as next week.

The United States also has picked up signs that Iran may be considering or planning "more complex" and broader attacks against American targets or interests in the Middle East, the senior U.S. military officer said, adding that it represented the most concerning signs since the days immediately after the Soleimani killing. The officer cited indications that advanced weaponry has been flowing from Iran into Iraq recently and that Shiite militia leaders in Iraq may have met with officers of Iran's Quds force, previously commanded by Soleimani.

The U.S. officer said Iran might have its eye on economic targets, noting the September 2019 missile and drone attack on Saudi oil processing facilities. Iran denied involvement but was blamed by the United States for that attack. 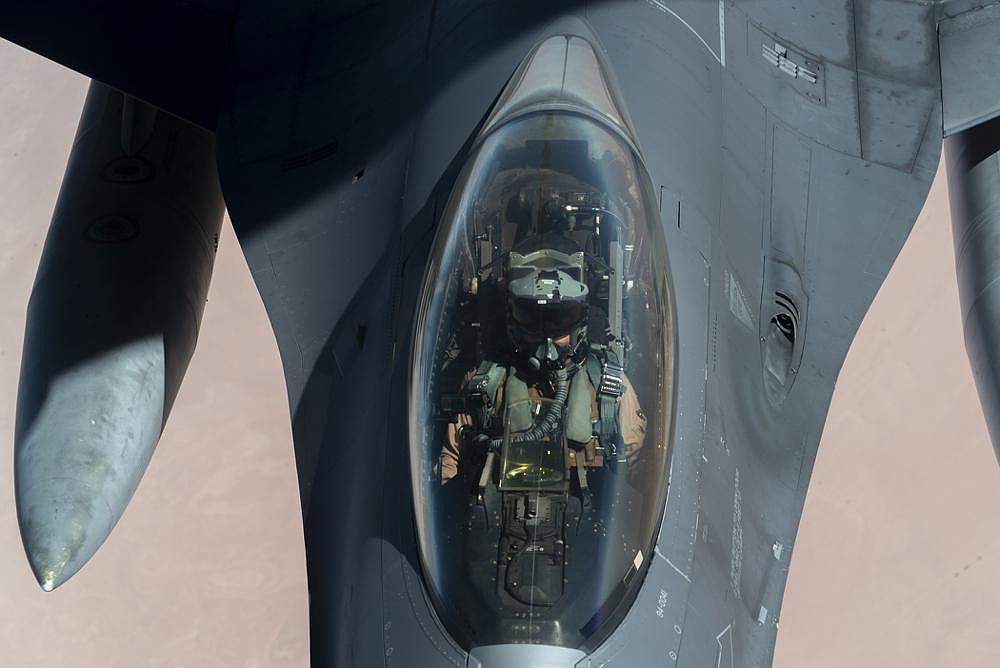 An Air Force F-16 Fighting Falcon is refueled in the air Wednesday by a KC-135 “Stratotanker” over the Persian Gulf. (AP/U.S. Air Force/Senior Airman Roslyn Ward) 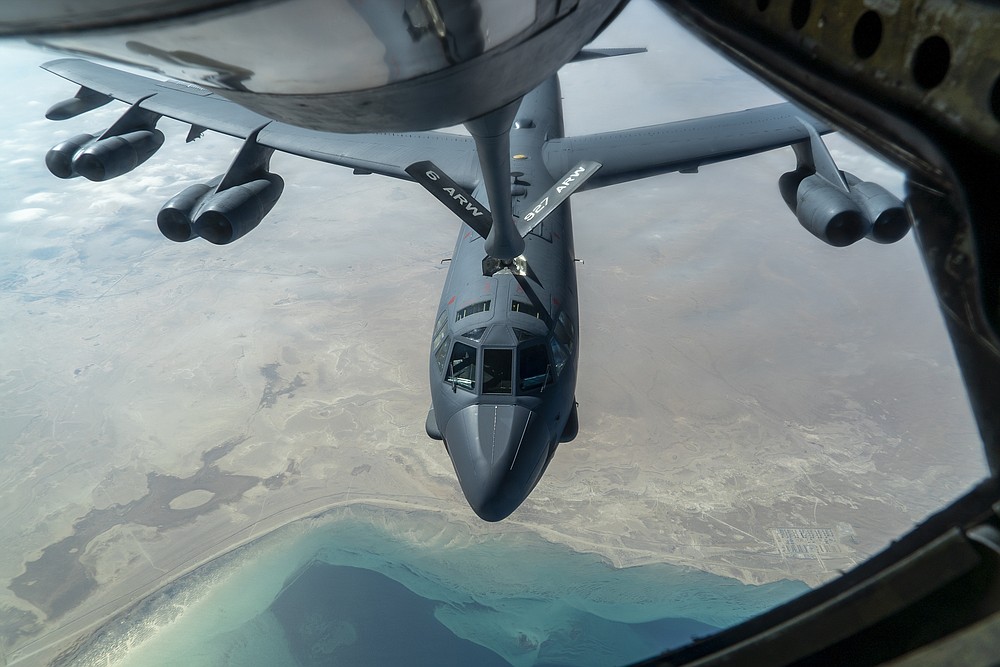 A U.S. Air Force B-52H “Stratofortress” from Minot Air Force Base, N.D., is refueled by a KC-135 “Stratotanker” in the U.S. Central Command area of responsibility Wednesday, Dec. 30, 2020. The United States flew strategic bombers over the Persian Gulf on Wednesday for the second time this month, a show of force meant to deter Iran from attacking American or allied targets in the Middle East. (Senior Airman Roslyn Ward/U.S. Air Force via AP)
ADVERTISEMENT