Hollywood gave the late Debbie Reynolds the cold shoulder for decades about preserving movie costumes. They've seen the error of their ways. by Brooks Barnes, The New York Times | December 13, 2020 at 3:27 a.m. 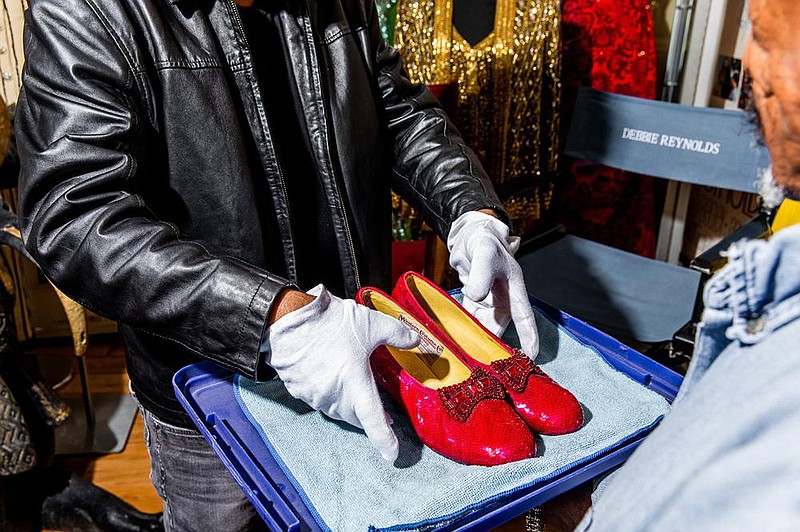 Todd Fisher holds a pair of ruby slippers from ‚ÄúThe Wizard of Oz,‚Äù part of the late actress Debbie Reynolds‚Äô extensive costume and prop collection, in Las Vegas, Oct. 20, 2020. Fisher, Debbie Reynolds‚Äô son, has agreed to loan the Academy Museum of Motion Pictures, one item from his own collection, but he said more would come as long as his mother‚Äôs legacy was being honored.(Roger Kisby/The New York Times)

LOS ANGELES — For decades, Debbie Reynolds begged Hollywood to help her preserve and exhibit her vast collection of golden age costumes. "These pieces are cultural touchstones that still carry the energy of the stars who performed in them," she once said, referring to legends like Elizabeth Taylor and Judy Garland. "There is magic in every thread, button and bow."

The Academy of Motion Picture Arts and Sciences turned her down — five times. Reynolds quoted an uninterested David Geffen in her 2013 memoir as once saying, "Why don't you just sell that stuff?"

In debt, she finally had no other choice, auctioning Marilyn Monroe's ivory-pleated halter dress that blew upward in "The Seven Year Itch" for $4.6 million and Audrey Hepburn's lace Royal Ascot number from "My Fair Lady" for $3.7 million — prices that shocked moviedom's aristocracy and proved Reynolds had been right. Also sold, in some cases to anonymous overseas collectors, were Charlton Heston's "Ben-Hur" tunic and cape, the acoustic guitar Julie Andrews strummed in "The Sound of Music" and every hat that Vivien Leigh flaunted in "Gone With the Wind."

Hollywood didn't give a damn. 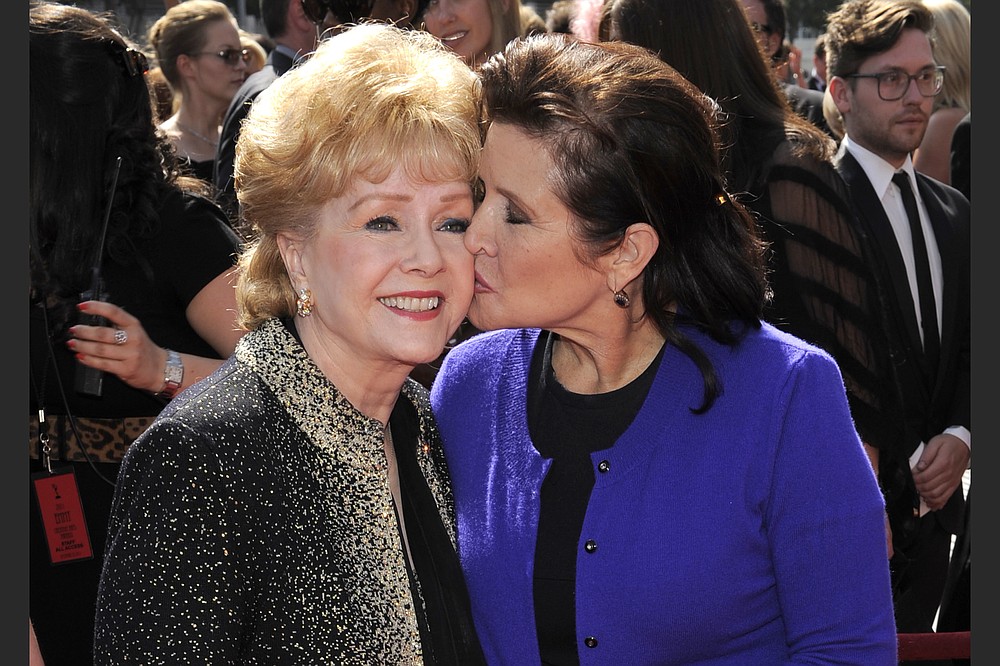 Debbie Fisher (left) and Carrie Fisher, were photographed in 2011. (AP)

Now, four years after she died at 84, there has been a plot twist in the Debbie Reynolds costume collection saga, one that she would undoubtedly find both maddening and satisfying: The Academy Museum of Motion Pictures, set to open April 30 and costing $482 million, finds itself caring about her collection — at least the part that is left, which includes iconic costumes she wore in movies like "Singin' in the Rain." Also remaining are screen garments created for Mary Pickford, Deborah Kerr and Cyd Charisse, as well as rare memorabilia from classics like "The Wizard of Oz" and "The Maltese Falcon."

"There are still amazing pieces," Bill Kramer, the museum's director, said by phone. Reynolds passed the items to her son, Todd Fisher, a major collector in his own right, who has long focused on film cameras and lenses, or "cinema glass." Fisher also inherited "Star Wars" memorabilia owned by his sister, Carrie Fisher, who died a day before their mother in 2016.

"I approached Todd about a year ago with the idea of naming our museum's conservation studio after his mother, who was so key to our history, not only as an artist — acting, dancing, singing, her comedy — but also as a collector and preservationist," Kramer said. "It turned into a conversation about how we might be able to work with Todd and the collection to bring Debbie's legacy — and Todd's and Carrie's — into the museum in a tangible way."

So far, Fisher has agreed to lend the Academy Museum one item from his own collection: a set of seven Bausch and Lomb Baltar lenses used by Gregg Toland, the fabled "Citizen Kane" cinematographer. But Fisher, 62, said more items would come, as long as the Debbie Reynolds Conservation Studio exists on the museum's lower level next to the Shirley Temple Education Studio. 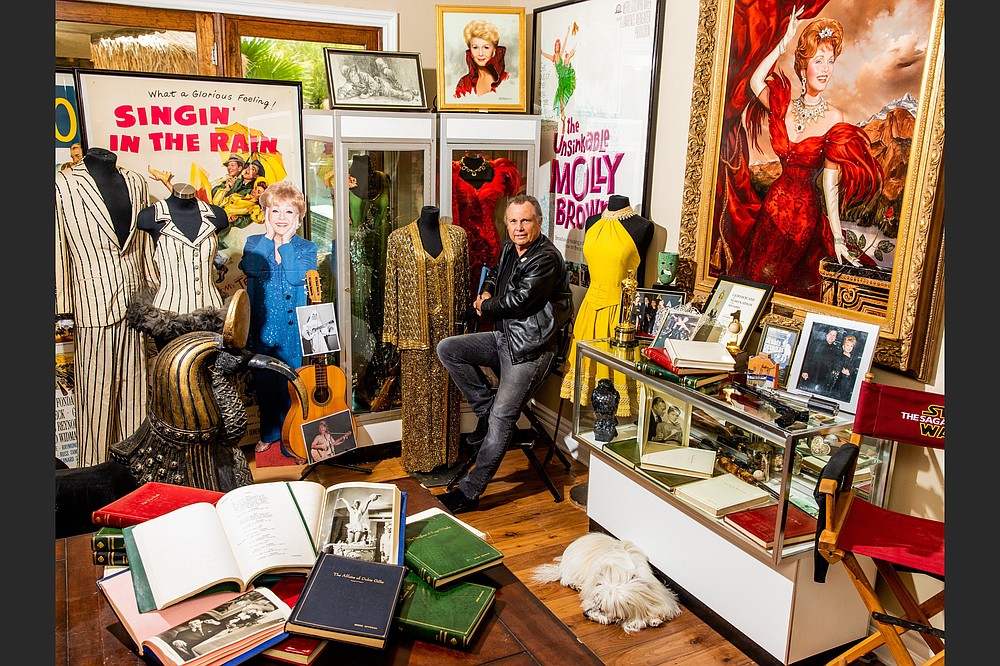 "My mother was one of the most forgiving people ever," Fisher said. "She would never want me to hold a grudge just because I have knowledge of all the missed opportunities — how the people running the academy in the past were never willing to step up and support her. She would have wanted me to share these important artifacts with future generations. So, as long as they are properly recognizing my mother for her contribution to this discipline, I agreed to provide access to whatever I have access to."

The academy, founded in 1927, started collecting films and materials related to them in 1929. Its vast holdings include more than 100,000 titles, including obscure documentaries and early American movies; roughly 10 million photographs; 80,000 screenplays; 50,000 posters; and tens of thousands of production and costume design drawings.

But the actual garments never ranked. Deborah Nadoolman Landis, founding director of the David C. Copley Center for Costume Design at the University of California, Los Angeles, pointed out that an Oscar was not awarded for the art until 1949, and costume designers were not able to secure their own membership branch within the academy until 2013.

"I think it was institutionalized sexism," Landis said. "Our field was considered women's work and treated with disrespect." Landis has been a member of the academy since 1988. Her costume design credits include "Raiders of the Lost Ark" (you can thank her for Indy's fedora and jacket) and "Coming to America," for which she was nominated for an Oscar.

Some costumes and props from Hollywood's early decades have only survived because electricians, makeup artists and other behind-the-scenes workers took items home (or scavenged them from garbage bins) and passed them down as family heirlooms. In some instances, studios cut up old costumes to use as floor rags. Reynolds started her collection in 1970, when Metro-Goldwyn-Mayer sold the contents of seven soundstages; she emptied her bank accounts to buy hundreds of items, including Elizabeth Taylor's pink and yellow racing silks from "National Velvet" and Leslie Caron's plaid schoolgirl outfit from "Gigi," complete with wool cape and straw hat.

"Debbie sat on my sofa and cried when she had to sell," Landis said, recalling the first of three Reynolds auctions in 2011 and 2014. "The academy bought nothing. It was a tragedy." 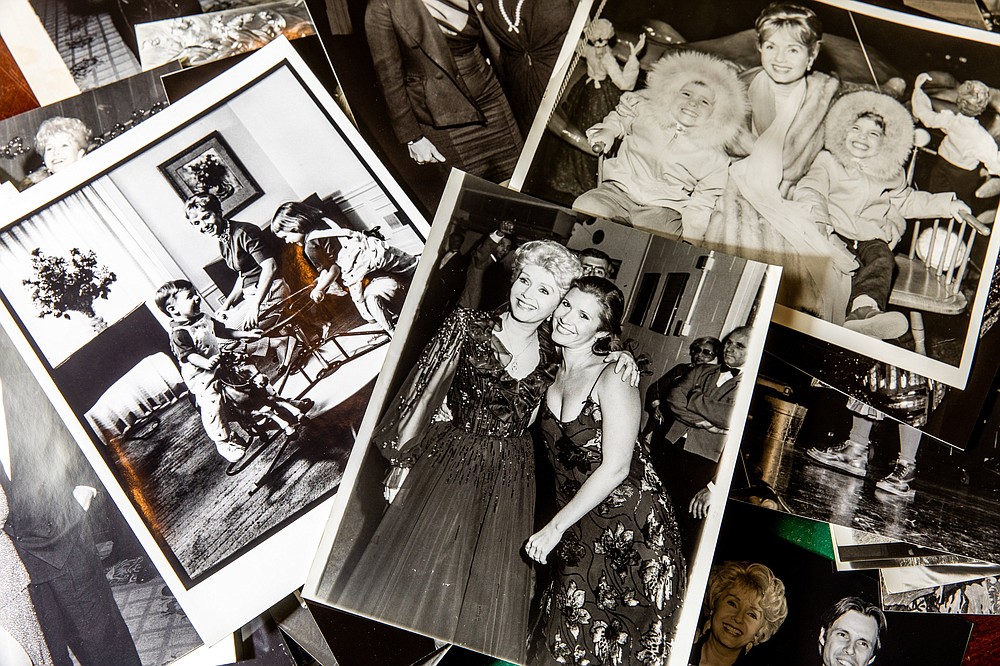 Photos of Debbie Reynolds and her children, Carrie Fisher and Todd Fisher, are part of the late actress’s collection. (The New York Times/Roger Kisby)

Kramer noted that the Academy Museum had recently purchased an array of costumes in private transactions, including Marlene Dietrich's evening robe from "Blonde Venus" (1932), Gene Kelly's sweater and slacks from "An American in Paris" and a denim and flannel outfit worn by Kathy Bates in "Misery." Leonardo DiCaprio, Steven Spielberg and Terry Semel, the former Warner Bros. chief, teamed in 2012 to buy a pair of ruby slippers from "The Wizard of Oz" for the museum, which was then pointed toward an opening in 2017. (Four pairs, size 5, are known to survive.)

And some things have recently been gifted in full or part to the museum, including Bela Lugosi's floor-length "Dracula" cape. (Museum conservators have worked to restore it. The black wool exterior and taupe silk crepe lining tore apart over the years, likely the result of changing humidity.) "It is important to us as a museum to be able to restore and safeguard this artifact, especially knowing that much of the material history of the classic horror cycle has been lost forever," Jessica Niebel, exhibitions curator, said in a statement last year.

Props donated to the museum include one of the "Rosebud" sleds made for "Citizen Kane." (Three were made. Two were burned during filming.) A full-scale fiberglass "Jaws" shark, salvaged from a junkyard in 2016 and restored, will be on display.

Designed by Renzo Piano, the Academy Museum, which has reached its preopening fundraising goal, hopes to attract more than 800,000 visitors a year. To do so, Kramer must appeal to two discordant audiences, offering scholarship for academy members (and students and film snobs) and sparkle for the masses. Approached in the right way, costumes could serve both needs — as Landis demonstrated in 2012, when she curated "Hollywood Costume," an exhibition at the Victoria & Albert Museum in London. (The Los Angeles County Museum of Art was initially approached with the exhibition idea and passed.)

The New York Times called "Hollywood Costume" "extraordinary" and "intelligent." The exhibition, which finally made its way to Los Angeles in 2014 with Kramer's help, turned into a blockbuster, ranking as one of the biggest draws in the V&A's 168-year history.