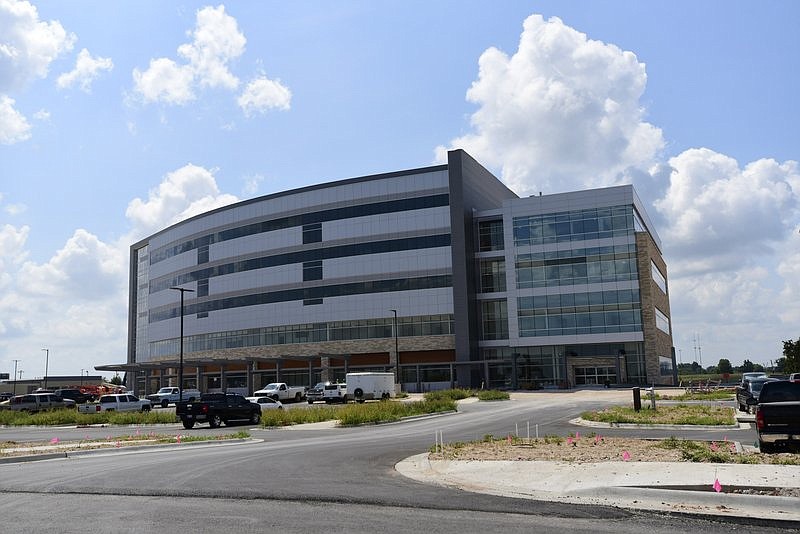 SPRINGDALE -- Arkansas Children's Northwest has more staff, a new sports medicine program and plans for more services -- all to make it easier for kids to receive health care in the region.

The hospital, which opened in March 2018, does not have any specific plans for new construction, but it does plan to move some of its services out of the building to make room for more, said Shannon Hendrix, the hospital's chief administrator.

Children's Northwest recently added a pediatric cardiologist and pediatric neurologist, giving the hospital two of each.

"Neurologic problems are very common, and with an increase in population, we will see a proportional increase in need. Previously, patients from Northwest Arkansas have needed to either go to Little Rock or even out of state to receive care, and we are trying to reduce that unnecessary burden," according to a statement from Dr. Stephen Jones, the new pediatric neurologist.

"The most common condition that kids need to see a neurologist for is epilepsy or seizures, but neurologists also deal with developmental delays, tics and headaches -- just to name a few," he continued. "There are specialized clinics in Little Rock which focus on specific problems, such as multiple sclerosis, movement disorders, or certain complex genetic disorders, though these patients can also often be seen at Children's Northwest."

All cardiology procedures, including surgery, and specialized heart imaging such as magnetic resonance imaging or CT will continue to be performed at Arkansas Children's Hospital in Little Rock, Dr. Harrison Cobb, the new pediatric cardiologist, said in a statement. Children's Northwest, however, can provide all other services including diagnosis, medical management and post-intervention follow up.

"Arkansas Children's Hospital has seen a growing need for pediatric cardiology, along with many other pediatric providers, in Northwest Arkansas for many years. Unfortunately, because of the lack of local provider resources many families found it easier to travel into the surrounding states to seek medical care. Northwest Arkansas has the fastest growing population in the state, and with nearly 1 in 100 children being born with a structural heart defect, there is an increased need," according to Cobb.

Children most commonly see a cardiologist for chest pain, fainting or evaluation of murmurs, he said.

"Pediatric cardiology patients vary from the typical adult cardiology patient in that we primarily treat those who are born with heart disease. Every week children are born in the state of Arkansas with a need for critical cardiac care and early, life-saving interventions," according to Cobb.

"Beyond childhood, there are pediatric cardiologists who specialize further into 'adult congenital heart disease' for children who grow into adulthood, as their needs are significantly different than a typical adult cardiologist would manage," he continued. "While many congenital heart disease patients require lifelong attention, the pediatric cardiologist is attuned to all of the needs and the difficulties these patients may face due to their childhood heart defects."

Children's Northwest will move its primary care services such as general preventive care into one floor of a new medical office building being built near the hospital at 2575 S. Gene George Blvd. to free up space for more services at the hospital, Hendrix said.

Children's expects to move the services by summer 2021, according to Nicole Huddleston, spokeswoman for Children's Northwest. The hospital plans to expand general surgery, gastroenterology, orthopedics, pulmonology, primary care, oncology and hematology within the next few years.

The hospital announced in August 2019 the Will Golf 4 Kids tournament and Color of Hope Gala committees had pledged to raise $5 million over the next five years to expand services for children with cancer and blood disorders.

"Fundraising efforts have been significantly impacted by covid-19. Our inability to have in-person events has presented significant challenges, but our foundation team is doing as much as possible to make sure virtual fundraising efforts are successful," Huddleston said.

Money already received from the fundraising has gone toward the hematology/oncology program, allowing the hospital to have its pharmacy open 24/7 and adding staff.

"We've also ordered cardiac respiratory monitors, which once installed, will help children who need a more advanced level of monitoring the ability to stay in NWA for their care," Huddleston said.

Additionally, Children's announced in September 2019 it would receive a $5 million anonymous donation for existing programs and future expansion.

"The principal of the $5 million cash gift will remain intact while the earnings support today's needs. When future capital expansion plans are known, the $5 million gift will unlock and become the first leadership investment. The 2020 earnings of this generous gift will support surgical minor equipment needs," according to Huddleston.

"Combining the pediatric expertise and facilities at Arkansas Children's Northwest with our sports medicine fellowship-trained providers and community-established relationships is a huge win for student athletes in our home community," Cox said in a news release from Children's Northwest.

"Working closely with trusted local orthopedic and sports medicine providers means more kids will be able to get the care they need close to home from established physicians who have long supported athletes in Northwest Arkansas," Montague said.