No place like home: Covid-19 can't stop Habitat for Humanity 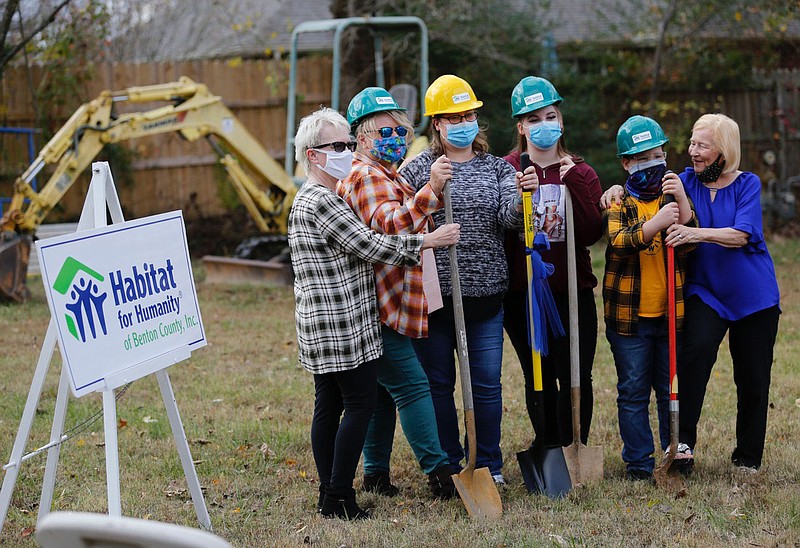 Neaomie Ryan (from right) hugs Lyric Cote, 10, as he stands with his sister Zoe Griffis, mother Angela Sockrider, Sockrider’s mother Diana Holmes and aunt Linda Look Monday, November 9, 2020, during a Habitat for Humanity of Benton County ground breaking event for a new home for Sockrider at 808 N. 31st Street in Rogers. Check out nwaonline.com/201126Daily/ and nwadg.com/photos for a photo gallery.(NWA Democrat-Gazette/David Gottschalk)

A few Habitat for Humanity staff members, relatives and residents gather on the clement, slightly cloudy afternoon of Nov. 9 to break ground on Angela Sockrider's future home in Rogers.

Sockrider -- mother of Zoe Griffis, 17, and Lyric Cote, 10 -- has been waiting for this moment since 2015. She and her children have been living with family, and their belongings have been in storage.

"This has been a very long journey for us. I was married. It didn't work out. I was left in incredible debt," Sockrider tells the distanced, masked gathering. "I'd just like to say that it's hard out there for one single person to take care of themselves in this economy, let alone a parent. So, no matter what I've done along the way to better myself or for my kids, it just doesn't -- it's not enough.

"Habitat made it possible for us to finally do something. We're ready to go on our next journey. We're ready for this."

Their groundbreaking had been scheduled for March, but covid-19 pushed their start date back.

Ninety percent of the Sockrider build is funded. If the organization can get all the materials needed -- and the weather cooperates -- the home should be move-in ready in four months, says Cindy Acree, executive director of the Benton County Habitat office.

In Benton County, Habitat for Humanity has 12 employees, and the rest of their work is done with the help of volunteers, Acree says. Their ReStore, which funds the organization, was shut down for nine weeks due to the pandemic.

"We're still making it up. It's been amazing how fast we've been able to bring it back, but the deficit we're running makes it difficult to fund these builds," Acree says.

Acree and her crew average a build or two a year, which Acree would like to see increase. Four families are currently on the waiting list. It takes around $110,000 and 400 volunteers to build a Habitat home, she says.

"Even if we have the money to build, it's going to be very difficult to find labor that's available," Acree says. "We just have to do things on faith and believe that the community is going to rally around us and get this finished."

Washington County Habitat, which has 11 employees, started its current build in February for Erica Kelso, a single mother of four living in Fayetteville.

Volunteers and workers dwindled down until, for a couple months, it was mostly just construction manager Dave Baer and Brandon Swoboda, the executive director, working on site, Swoboda says.

Once the organization had protective procedures in place, Baer says he started working with volunteer groups again. But he's taking it day by day.

"It's all been an adjustment, but I'm always adjusting anyways," Baer says. "I don't know who is showing up on site. I always have to be on my toes. A group could come, and they're all construction workers -- sometimes I know that -- then I'm ready for them in a different way than if the volunteers have zero experience."

Both Habitat groups are bringing on smaller groups of people in the same "bubble" to volunteer, while still taking health safety measures. Washington County Habitat had Fayetteville police and small groups from the same companies come out to help, for example.

Habitat has seen an increase this year in people reaching out to see how they can apply for a Habitat home. However, the administrators don't open the application process until they have the lot and know they'll have the funds to build a home, Swoboda says. This helps lower the wait time, ideally to nine to 12 months, for accepted applicants.

Financial giving has dropped and corporate grants have decreased, though furniture donations to the ReStore have been steady, Swoboda says. They were able to keep building and paying staff through emergency funds that had been set aside.

Washington County Habitat is trying to raise $50,000 through the "Hope for the Holidays" campaign in order to break ground on the next two builds.

"Habitat puts God's love in to action to build homes, community and hope," Swoboda says. "There's something about building a home and bringing a community together, especially during these times. It gives you hope."

Rachael Phillips, a single mother of four, lost two homes while living in the small town of Baxter Springs, Kan. After the tornado, she and her kids moved through three rentals in three months.

That's when she started praying and decided it was time for a fresh start. She moved to Pea Ridge.

"It was completely a leap of faith to move here and start over for me and my kids. New environment. New people," Phillips says.

Phillips reached out to Habitat shortly after moving in 2014, but she admits she honestly forgot about it until someone from the organization called. She submitted an application and was officially accepted in June 2018. Covid has pushed her groundbreaking to next year.

Many have the misconception that Habitat gives away free houses to families, the staff and applicants agree.

Habitat offers qualified applicants a 0% interest mortgage with payments they can afford. Future homeowners put in 300 hours of sweat equity, helping to build homes, including theirs. Staff members help applicants with the transition from renter to owner, providing training on personal financial management, basic home maintenance and more.

Phillips went through a credit counseling process, and Habitat monitored her spending for a year, she says.

"It's a waiting process, but everything Habitat does is amazing," Phillips says. "All the people are so caring and so helpful. It's not just about building the home. They've become my family."

Kelso works a full-time and two part-time jobs. Her family of five is currently in a three-bedroom rental, and she is most looking forward to that sense of stability owning a home can bring.

"Just being out of that rent cycle where prices go up and any time you move the quality goes down," she says. "I think it gives a sense of hope to my kids for their future. Instead of being worried about where we're living, we can focus on their future, where they're going to college and what they can achieve."

Swoboda says getting donors to understand the difference they're making can be one of the challenges in fundraising.

"Asking someone to donate, say $25, to help put one family in a home? It might not seem like your money goes far," he says. "But by helping us build this home, you're going to change the future of an entire family for generations by helping them become homeowners."

The impact is long-lasting and life-changing for both the family and the community, Acree says.

When their new home in Rogers is finished, Zoe and Lyric are most excited to paint their own rooms any color they want. Choices have not been finalized, but they have a bit to decide. 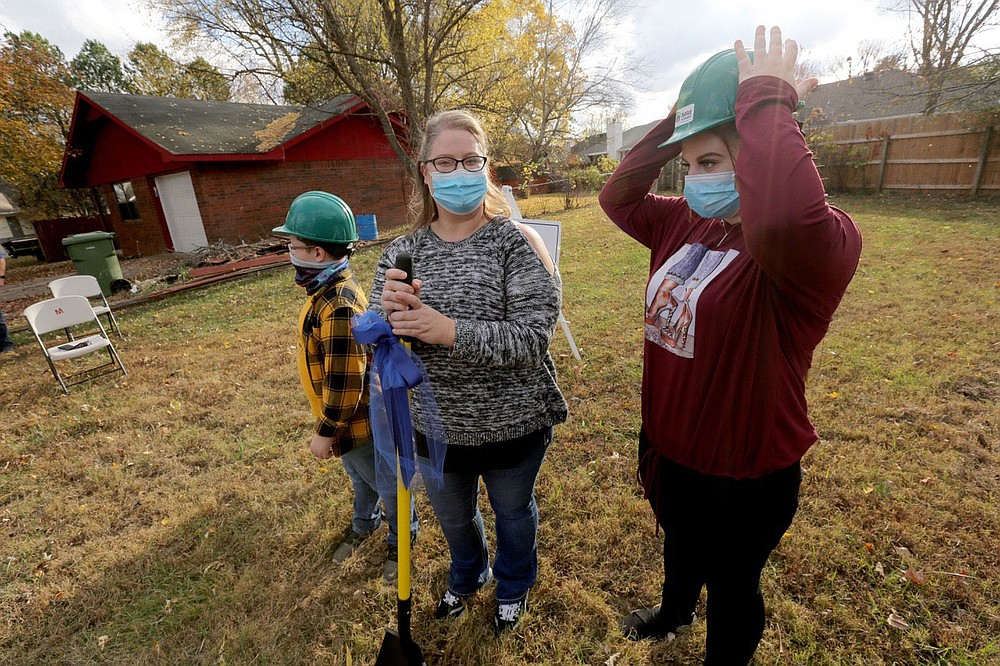 Zoe Griffis (from right), 17, stands with her mother Angela Sockrider and her brother Lyric Cote, 10, as they prepare to break ground Monday, November 9, 2020, during a Habitat for Humanity of Benton County ground breaking event for a new home for Sockrider at 808 N. 31st Street in Rogers. Check out nwaonline.com/201126Daily/ and nwadg.com/photos for a photo gallery.(NWA Democrat-Gazette/David Gottschalk) 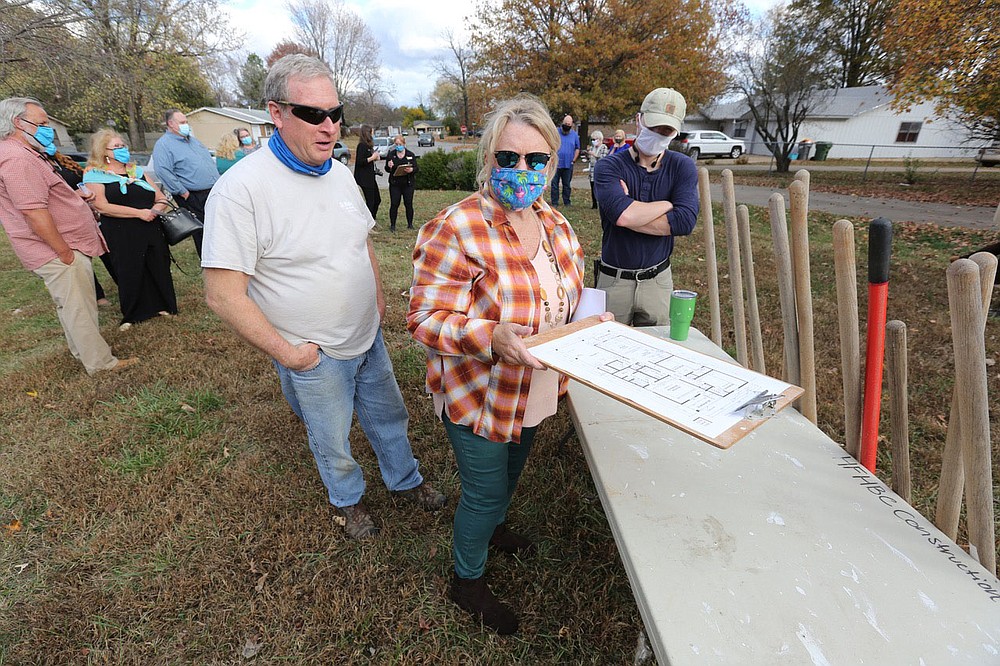 Diana Holmes (right) reviews the house plans with Philip Fink, construction manager, Monday, November 9, 2020, during a Habitat for Humanity of Benton County ground breaking event for a new home for her daughter Angela Sockrider at 808 N. 31st Street in Rogers. Check out nwaonline.com/201126Daily/ and nwadg.com/photos for a photo gallery.(NWA Democrat-Gazette/David Gottschalk) 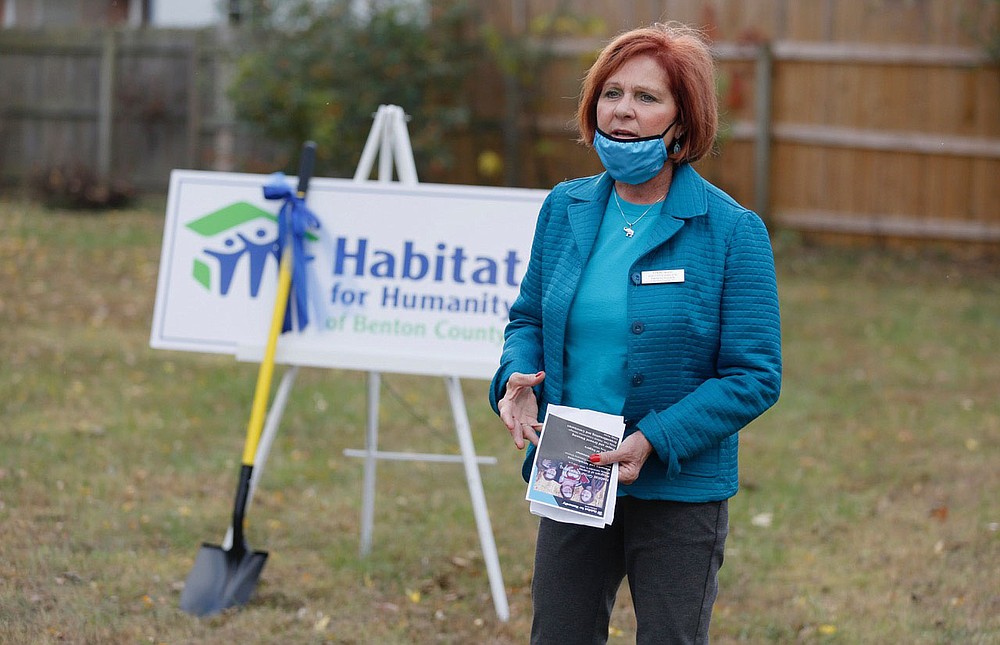 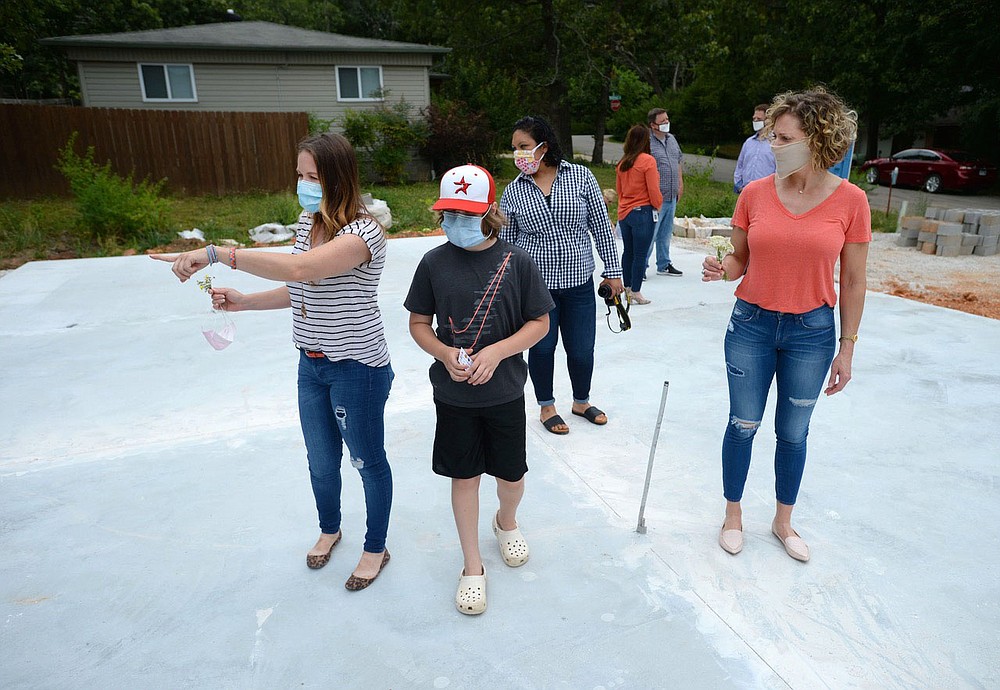 Homeowner Erica Kelso (from left) points out the planned layout of her master bedroom Friday, June 26, 2020, for her son, Louie, 10; daughter, Sophie, 7, (not pictured); and friends Carolina Vargas and Betina Henschell after a ceremony for the house's construction on Oak Road in Fayetteville. The house is being constructed by Habitat for Humanity of Washington County as the organization's 2020 Realtor Build house through a partnership with local real estate and industry partners and volunteers. Visit nwaonline.com/200627Daily/ for today's photo gallery. (NWA Democrat-Gazette/Andy Shupe)
More News

Habitat for Humanity began in 1976 as a grassroots effort on a community farm in southern Georgia. The Christian housing organization is now an international nonprofit working in local communities across all 50 states in the U.S. and in more than 70 countries, according to www.habitat.org. Find out more about the local offices at habitatbentoncounty.co and habitatwashingtoncoar.org.

Ashton Eley is a freelance writer based in Central Arkansas. Email her at [email protected]