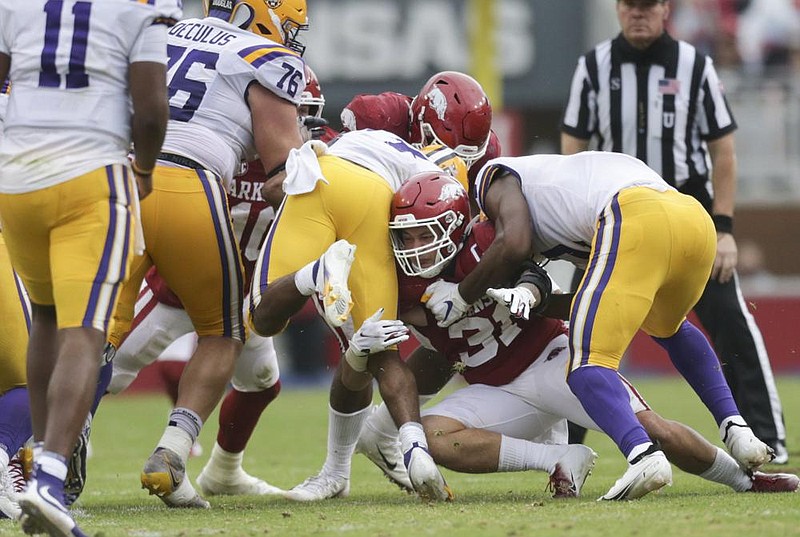 FAYETTEVILLE -- University of Arkansas linebacker Grant Morgan was one of 67 nominees for the annual Burlsworth Trophy announced Monday.

A fifth-year senior from Greenwood, Morgan leads the nation with 111 tackles heading into the Razorbacks' regular-season finale. Morgan is also one of 16 semifinalists for the Butkus Award, which is given to the nation's top linebacker.

Morgan's nomination for the Burlsworth Trophy has been expected since he opened the season with multiple double-digit tackle games, including 19 stops against Ole Miss, a feat he repeated against LSU.

The nomination came three days after Morgan suffered a left knee injury in Saturday's 50-48 loss at Missouri, which is expected to keep him out of Saturday's home finale against No. 1 Alabama.

The Burlsworth Trophy, named for the former Arkansas All-American offensive lineman Brandon Burlsworth of Harrison, has been given since 2010 to the nation's top college player who began his career as a walk-on.

Morgan ranks fourth in the country with 12.3 tackles per game. He leads the Razorbacks with 7.5 tackles for loss, and he also has 2 sacks, 5 pass breakups, 2 quarterback hurries and an interception.

This year's Burlsworth Trophy presentation will be a virtual ceremony on Jan. 4.

Arkansas associate head coach and defensive coordinator Barry Odom was one of 56 nominees for the Broyles Award released Tuesday. The award, created by former Razorback linebacker David Bazzel in honor of legendary Arkansas coach Frank Broyles, has been celebrating the nation's top assistant coaches since 1996.

Broyles left a legacy of selecting and developing well-regarded assistant coaches, many of whom went on to lead their own programs.

Odom's game planning helped the Razorbacks win games over Mississippi State, Ole Miss and Tennessee by holding each of those teams well below their season averages.

The Razorbacks have had four SEC defensive player of the week winners this season, the most in school history. Odom's work has helped in the rapid development of safety Jalen Catalon, who leads all FBS freshmen with 89 total tackles and 48 solo stops. Catalon, fellow safety Joe Foucha, and linebackers Grant Morgan and Bumper Pool have all won SEC defensive player of the week honors this season.

Odom, the former Missouri head coach, is one of 10 SEC assistants among the nominees, including Alabama offensive coordinator Steve Sarkisian, who Odom will square off against Saturday.

Arkansas linebacker Grant Morgan supported Odom's candidacy, writing on social media, "Coach Odom represents every bit of what this award portrays. Great coach and an even better man! Wouldn't want to play for anyone else!"

Coach Sam Pittman noted on social media Tuesday the anniversary of his hiring date one year ago.

Pittman posted to his Twitter account: "A year ago today was the greatest day of Jamie and I's life," and he included four hashtags: "just getting started," "turnthatdamnjukeboxon," "thankful" and "gohogs."

Sophomore wideout Treylon Burks said he wasn't aware he had surpassed the 200-yard mark in receiving Saturday at Missouri until later in the day.

"I mean, that's a blessing," Burks said. "But I just went out there and poured out my heart for the Arkansas Razorbacks.

"I wasn't really worried about it. I didn't hear about it until that night that I had 206 yards. I was just like, 'Well, just another game.' Just get back at it this next week."

Burks caught 10 passes for the career high in yardage, including a 68-yard touchdown that pushed his total to 7 touchdowns.

Myron Cunningham was voted an offensive captain and had the honor of having his parents attend their first game of his college career Saturday at Missouri.

Coach Sam Pittman made sure to send Cunningham out as the Hogs' lone representative for the coin flip after he heard Cunningham's parents made the trip from Ohio to Columbia, Mo.

"It was special," Cunningham said. "And I knew they enjoyed their time there, and I really enjoyed having them there.

"In my opinion, that's the ultimate goal as a senior, is to have everyone on the team believe in you and trust you enough to vote you a captain, and I just appreciate every one of my teammates."

Cunningham is aware seniors have the ability to return for another season, but he's not ready to make that call yet.

"I'm not really worried about that right now," he said. "I'm just focused on Alabama this week."

The "Sam Pittman Live" radio show will not be held at its normal time this week due to the men's basketball team scheduling a home game against Southern tonight at 7.

The show normally airs from 7-8 p.m. on Wednesdays. Pittman is contracted to hold one more radio show this season.

Sam Pittman dished out some of the best praise he's issued as the Arkansas head coach to the Alabama offensive line this week.

Pittman said on Monday: "This year their offense is just incredible. Their offensive line is the best in college football. Matter of fact, I'm not for sure that I've seen an offensive line that well coached, including the ones that I've coached."

"They can do it all," he said. "They can run, they can pass protect, they can get out on toss sweeps. They play aggressively. I think it all starts with ... two great tackles [Alex Leatherwood and Evan Neal] and the center, [Landon] Dickerson."

"It's definitely something I'm looking forward to," he said. "You want to be the best you've got to play the best.

"And you know in this league if you want to go to the NFL this is the league to do it and the game to do it. Obviously every game on the schedule is building your resume and this one is an important game."