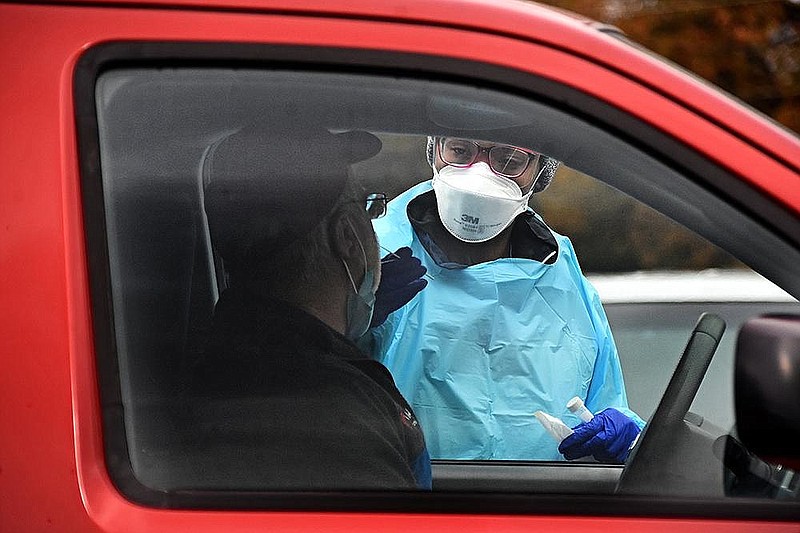 Arkansas on Sunday reported 40 more deaths from covid-19, its second-highest daily death toll since the start of the pandemic, as active cases and hospitalizations remained at or near record highs.

Thirty-five of the deaths were classified as confirmed and five as probable, according to the Arkansas Department of Health.

The single-day death toll reported on Sunday approached the state's record of 42 deaths set on Nov. 16 and followed the 34 deaths reported on Saturday.

The newly reported deaths brought the state's toll from covid-19 to 2,660 as of Sunday.

All but two of the deaths reported on Sunday occurred between mid-November and the present, according to Department of Health spokeswoman Danyelle McNeill.

Remarking on the deaths reported Sunday, Gov. Asa Hutchinson wrote on Twitter that "we continue to see the devastating results of not following [Centers for Disease Control and Prevention] and Department of Health recommendations."

"Please do your part to contribute to a healthy Arkansas," he added.

Additionally, 1,542 new covid-19 cases were reported in the state on Sunday. The new-case total represented a decrease from Saturday's 2,245 cases, but it exceeded the 1,221 new cases reported the previous Sunday.

Meanwhile, the Department of Health's count of active cases hit a new high for the third day in a row, with 18,750 confirmed and probable active cases, an increase of 143 from the previous day.

Five deaths were reported in Benton County, four in Sebastian County, three in Polk County, and two each in Boone, White, Craighead, Washington, Garland and Baxter counties, McNeill said in an email.

Among Arkansas counties, the overall pandemic death toll is highest in Pulaski County, where 295 confirmed and probable deaths have been reported, followed by Washington County with 184 and Benton County with 179.

Likewise, Pulaski County led in terms of confirmed and probable active cases. The Department of Health reported that 1,950 active cases were in the county on Sunday.

Since March, 170,924 virus cases have been reported in Arkansas.

Of the 1,323 new confirmed cases reported on Sunday, 137 were from correctional facilities, according to the Department of Health.

Results from over 13,000 polymerase chain reaction, or PCR, tests and 931 antigen tests were reported on Saturday, bringing those categories of tests to more than 67,100 and 11,600, respectively, in the month of December.

The Little Rock School District reported Sunday that an additional 26 individuals entered quarantine and six others tested positive for the coronavirus between Friday and Sunday.

The district said Booker Elementary, where one staffer tested positive and 11 others entered quarantine, would transition to entirely virtual instruction through Friday. The district plans to reassess the situation at Booker on Friday for "possible further adjustment," according to the district's weekend virus report.

Additional covid-19 cases were scattered around the school district, including one staffer each at David O. Dodd Elementary, Metro Career Tech and Western Hills Elementary, as well as one student each at McDermott Elementary and Southwest High School.

Seven students at Western Hills and four at Booker entered quarantine over the weekend, according to the school district.