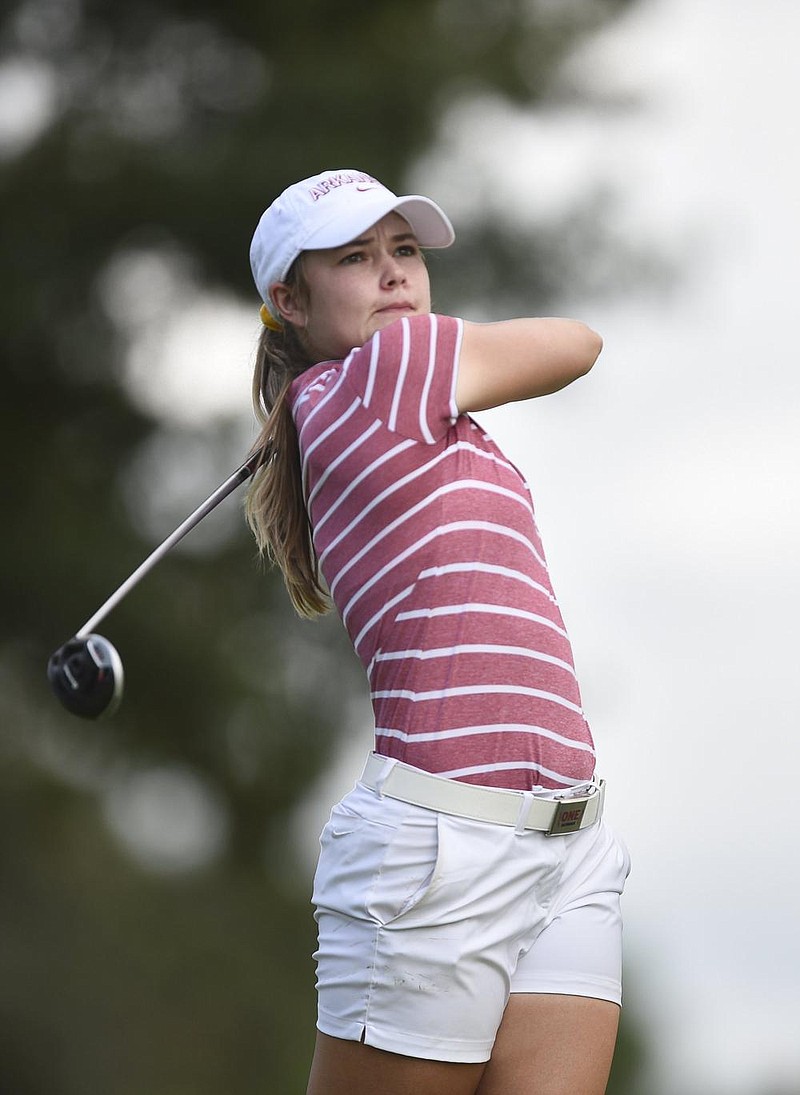 Former Rogers standout and current Arkansas Razorback Brooke Matthews, who shot a 7 under for the tournament to finish tied for 49th, used her knowledge of Pinnacle Country Club to her advantage. (NWA Democrat-Gazette/Charlie Kaijo)

ROGERS -- Brooke Matthews is one of a number of University of Arkansas golfers who have benefited from having the LPGA Northwest Arkansas Championship in their own backyard.

The former Rogers standout and current Razorback proved she belonged among the best female golfers in the world this week, firing a 7 under for the tournament to finish tied for 49th with a 70-69-67--206.

Matthews earned a place in the tournament field through a sponsorship exemption and used a solid 69 on Saturday to make the cut. She followed that up with a 67 on Sunday.

"This was an amazing experience," Matthews said. "It was just a really cool week to get to play against the best in the world. I was feeling good about my game, so making the cut was a bonus and I learned a lot from these great players out here."

Matthews struggled some early in her second round but closed strong. That late push to make the cut gave her the confidence she needed to go even lower on Sunday, she said.

"I knew I was hitting it well," she said. "I started to see some putts go in, so I just tried to carry that into today."

Having played Pinnacle Country Club many times, she was able to use that course knowledge to her benefit, Matthews said.

Matthews said the confidence earned this week would be a huge advantage heading into her collegiate season this fall.

"I feel really good about my game," Matthews said. "I know there are places I can improve, but I feel like this will be a big boost for me moving forward."

Alex Pano of Lake Worth, Fla., just turned 16, but she's not driving a car yet. She's been too busy driving golf balls instead.

Pano shot an 8 under at the Northwest Arkansas Championship as an amateur after earning a place in the field on a sponsorship exemption. She was solid over her final two rounds after an opening 72. Pano shot a 67 on Saturday to make the cut, then went one shot better on Sunday with a 66. This was her first LPGA event this season and the third of her career.

"It's definitely the best one I've played in," Pano said. "I thought the atmosphere was great even without fans. The course was gorgeous."

Pano said she will take a wealth of knowledge away from the tournament, and a ton of confidence that she can compete against the best in women's golf.

The teen phenom has not made a decision on her golf future regarding playing in college or turning pro. Currently, she is focusing on continuing to compete in Symetra Tour and minor-league tour events, she said.

"Right now I'm not sure whether I'm going to college, but long term, the goal is to definitely play on the LPGA tour," Pano said. "This week I learned a lot about myself and that I can compete and do pretty well. So that definitely gives me a lot of confidence moving forward."

A payday at last

It wasn't the finish she wanted, but Esther Lee will finally get to make a bank deposit this week after firing an 11 under during this week's tournament. It was the first time she has made the cut as an LPGA Tour rookie, and her $28,249 was a long time coming.

"It feels pretty good," Lee said following her round. "I was hitting it really well this week. Unfortunately, I had a bad finish. I doubled the last hole, but it's a step in the right direction, making the cut. So I will take that."

Lee played on the Symetra Tour last season and earned a top 10 finish and her LPGA tour card. Now that she has finally earned a paycheck, she is confident she can continue to progress.

"I just need to learn from this and try to be more consistent with my putts," said Lee. "My irons were not that great today which is why I struggled on the back nine, but now I know what I need to work on."

Lee said she will join the rest of the LPGA Tour in taking this week off, and is hopeful to land a spot in the ANA Inspiration, the next tour stop and a major event on the tour.