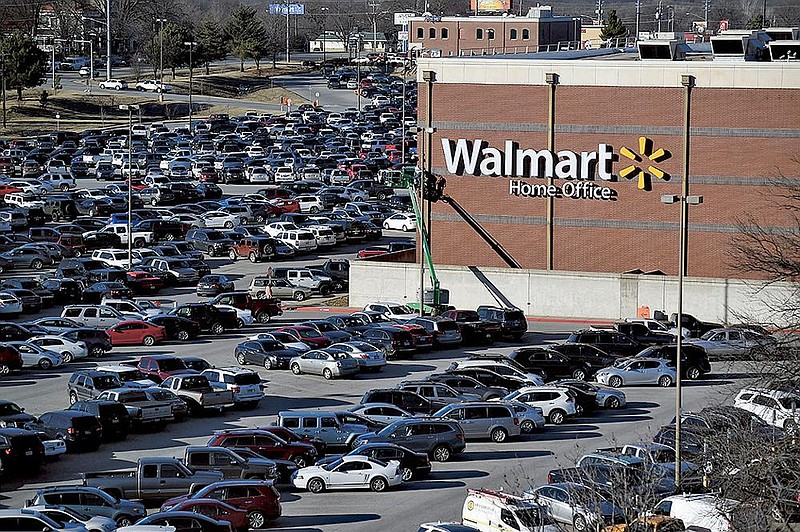 Walmart Inc. aims to overhaul the retail industry's product supply chain to make it more environmentally sustainable, the company said Wednesday. In a new report, the retailer described its efforts in the past year toward reaching that goal as well as supporting its workers, customers and suppliers.

The Bentonville-based retailer's 2020 Environmental, Social and Governance Report, or ESG, covers the fiscal year that ended Jan. 31. A Walmart spokeswoman said the report, usually released in the spring, was delayed this year while the company dealt with the effects of the pandemic.

Kathleen McLaughlin, Walmart's chief sustainability officer, said in a news release that because the fiscal year ended before the coronavirus was declared a pandemic, its effect is not included in the report. Neither is the focus on racial inequality after the death of George Floyd and other Black Americans.

However, McLaughlin said in the release that Walmart's initiatives "go beyond mitigating business risk."

"We aim to address societal issues through business initiatives that create value for all our stakeholders," she said, "and we seek, in collaborating with others, to transform underlying societal systems (such as retail workforce development and food supply chains) for long-term social, environmental and economic sustainability."

The report provides a "holistic snapshot" of Walmart's environmental, social and governance performance in fiscal 2020, including "our aspirations, strategies, practices, challenges and progress on relevant ESG issues and metrics," McLaughlin said.

In the report's environmental section, Walmart said it used renewable energy sources for about 29% of the company's global electricity needs. This puts Walmart on track toward its goal of powering half its operations with renewable sources by 2025.

Walmart also is on track to achieve its goal to cut emissions 18% by 2025, according to the report. The company also had 2,300 more suppliers sign on to its Project Gigaton, an initiative to remove a gigaton of greenhouse gases by 2030.

As part of the retailer's goal to achieve zero waste in its operations by 2025, Walmart said it diverted from landfills and incineration about 80% of unsold products, packaging and other materials from its global operations.

According to the report's section on social goals, Walmart paid employees more than $18 an hour, including benefits; sourced more than $11.7 billion of products from diverse suppliers in the U.S.; and increased the diversity of its U.S. management.

Walmart employees completed 88,000 college credits during the year through the company's Live Better U initiative, which gives workers a chance to complete degrees or certificate programs for $1 a day. Also, more than 200,000 Walmart workers were promoted to jobs of greater responsibility and higher pay.

"Through our jobs, sourcing, relationships and capabilities, we aim to create economic opportunity, advance equity and help strengthen social cohesion," Walmart said in its report.

In the corporate governance section, Walmart said members of its board of directors "bring a variety of backgrounds, qualifications, skills and experiences that contribute to a well-rounded board that we believe is uniquely positioned to effectively guide our strategy and oversee our operations in a rapidly evolving retail industry."

Seven of Walmart's 11 board members are independent, three are women and four are racially or ethnically diverse. More than a quarter were appointed in the past five years, and the median tenure is 6.6 years.

Walmart said it has more than 1,900 ethics and compliance workers worldwide who are responsible for supporting U.S. retail operations and e-commerce business as well as international operations.

The retailer's corporate citizenship standards include contributing to and advocating for effective policy regarding issues such as climate change, minimum wage, firearms, opioids and privacy. Also, Walmart said in the report that paying taxes is "an important part of our company's societal impact." Walmart said that over the past five years, it has paid more than $26 billion in corporate income-based taxes worldwide.

In a message accompanying the report, Chief Executive Officer Doug McMillon reflected on the challenges of the past fiscal year and the first six months of the current one, saying there's no such thing as business as usual at Walmart.

"Our history is a mosaic of challenges, tests, explorations, failures and many great successes," McMillon said. "While the world has felt quite turbulent recently, we have an opportunity to turn the tide of history -- and take the best from this time. In the shadow of these tough months, we're more motivated than ever to make meaningful environmental, social and economic progress -- and we're eager for others to join us. Our world depends on it."