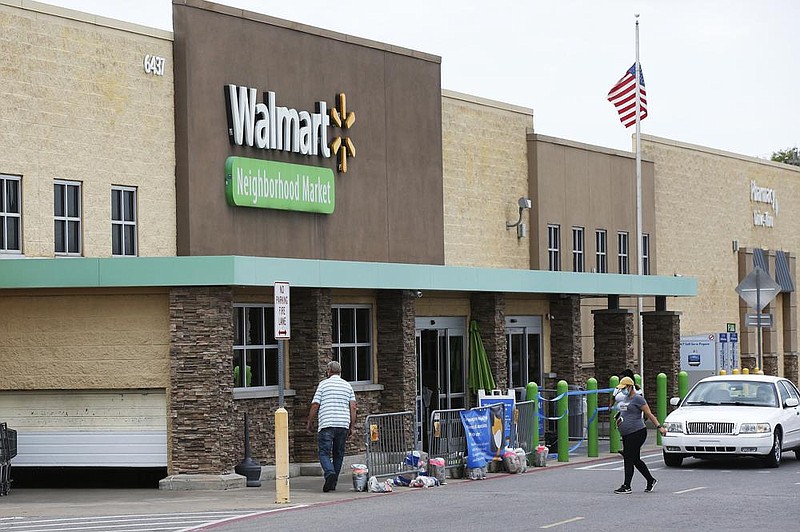 Walmart Inc.'s U.S. e-commerce business nearly doubled in the second quarter as the coronavirus pandemic drew shoppers to its pickup and delivery services, the company said Tuesday. Profit nearly doubled as well in a blowout quarter during a period of economic uncertainty.

Even after adjusting for one-time items, Walmart's per-share earnings of $1.56 topped the average earnings estimate of $1.25 per share from 29 analysts surveyed by Thomson Reuters.

Company executives said in the report released before the markets opened that government stimulus checks and emergency unemployment insurance helped boost sales of not just groceries but higher-margin general merchandise and apparel items as well.

Doug McMillon, Walmart's president and chief executive, said in a call with investors that shoppers in the second quarter spent more on home-based activities, leading to strong sales in categories like TVs and computing. They also spent more on outdoor entertainment and sports even as they prepared more meals at home, which benefited grocery sales.

On the other hand, back-to-school shopping "was negatively impacted by the health crisis in terms of timing and demand," McMillon said. "We have been thoughtful in our approach both in stores and online, and we believe we are well-positioned whether students or teachers work from classrooms or their homes."

Carol Spieckerman, a retail consultant and president of Spieckerman Retail, said a "powerful combination of factors converged" in the second quarter to drive Walmart's strong performance.

"Walmart's everyday low prices, multicategory breadth, strength in grocery and portfolio of convenient and safe shopping options made it the natural beneficiary as consumers received stimulus checks," Spieckerman said. "The business was Walmart's to lose, particularly as competitors struggled."

Walmart's U.S. division, by far the company's largest, reported net sales up 9.5% to $93.3 billion. Sales at stores open at least a year, considered a key indicator of a retailer's health, climbed 9.3%.

Customers continued to consolidate their shopping trips as they did in the first quarter, the company said. They're making fewer trips, but the average receipt per trip was up 27%.

The 97% jump in U.S. e-commerce sales, counted under the Walmart U.S. division, reflected many shoppers' shift during the pandemic to the contactless option of buying groceries online and picking them up curbside or having them delivered. These services continued to experience all-time-high sales volumes, Walmart said.

In addition, sales at Walmart.com's marketplace, which includes third-party vendors, grew by a triple-digit percentage, the company said.

Walmart's long-awaited subscription service, called Walmart Plus, is still being tested and refined, McMillon said. Touted as Walmart's counter to Amazon Prime, a $98-a-year subscription includes unlimited, same-day delivery of groceries and general merchandise along with other perks, such as discounts on fuel.

The service was reportedly to debut in late March or early April, but was pushed to July because of the pandemic, according to Recode. The retailer has not given a new start date.

Though Walmart Plus is generally viewed as an effort to make Walmart more competitive against e-commerce giant Amazon, "the million-dollar question is what will the cost be to Walmart, and will members be willing to pay for it," said Brian Yarbrough, a retail analyst with Edward Jones.

"Walmart's core customer makes $40,000 a year," Yarbrough said. "How many are going to pay that annual fee?"

But he noted the retailer has been bringing in higher-income customers during the pandemic with its online grocery options. Those shoppers may feel it's worthwhile if they frequently choose delivery.

Spieckerman said integrating more categories besides groceries into Walmart's existing convenience and delivery platforms may have factored into the delayed debut of Walmart Plus.

"Walmart seems to need more time to work out a differentiated proposition here, one that goes beyond fast groceries and creates more distance from Amazon," Spieckerman said.

Walmart's international division didn't fare as well in the quarter as its U.S. counterpart. Net sales dropped 6.8% to $27.2 billion. Despite positive same-store sales in seven of its 10 markets, government-mandated store closures in India, Africa and Central America cut into sales there.

At Sam's Club, Walmart's members-only warehouse club division, net sales including fuel rose 8.8% to $16.4 billion, and same-store sales grew 8.7%. Both the number of transactions and amount of sales per trip increased during the quarter.

The pandemic had a positive effect on membership, which grew more than 60% as shoppers continue to buy necessities in bulk, the company said. Membership income rose 7.8%, which was Sam's Club's highest quarterly increase in more than five years.

Walmart again declined to provide guidance for the fiscal year. As in the first quarter, the company cited too many uncertainties related to the pandemic and its effects on domestic and global economic conditions.

Executives likewise were guarded in answering investors' questions about their outlook for this year's Christmas shopping season.

"Obviously they're well-positioned with e-commerce and curbside pickup," Yarbrough said. "The fact that they're within 10 miles of 90% of the population, and carry lots of different product lines, they're in a better position than mall-based retailers" for the holidays.

"If we continue to see a rebound in economic activity and barring a big flare-up in the virus, we could see a decent holiday," Yarbrough said.

Spieckerman said that many factors out of Walmart's control will play into the Christmas shopping season, including ongoing support to individuals and particularly to small businesses.

"The fate of small businesses is a less-talked-about concern," Spieckerman said, and "small-business viability is a major factor for Walmart's success."

Still, Walmart will have contingency plans at the ready, she said. Plus, "Walmart's established platform brings tremendous flexibility. ... This will provide a nice buffer for whatever the holiday season brings."

"Walmart's second-quarter performance may well be an anomaly, but the company is better positioned than most to weather any storms," Spieckerman said.