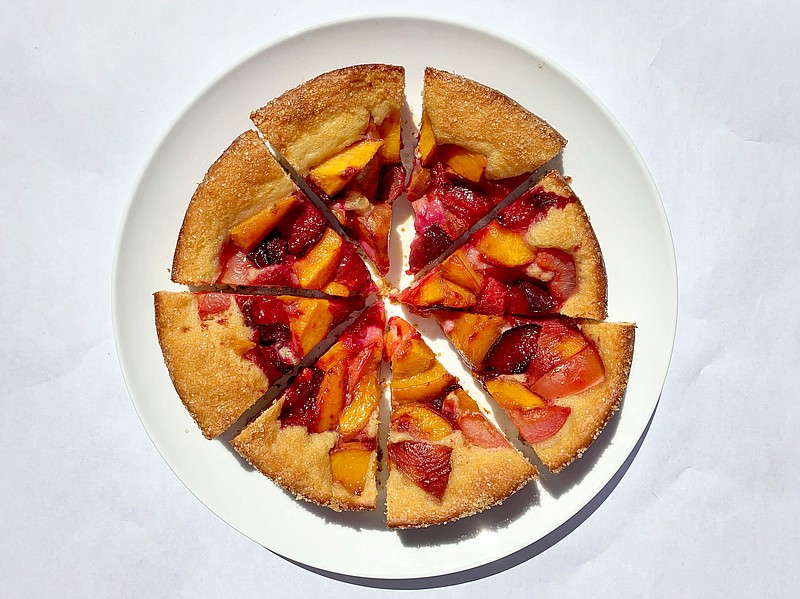 While summer in the "before times" may have meant swimsuits and beach days to most people, to me it only ever meant it was time to eat all the stone fruit now! As anyone who counts fruit as their true love can attest, now is the season of lustful infatuation. Berries are great, but have you ever bitten into a peak-season peach and had its juice run down your arm?

I buy the callipygous beauties - plums, apricots and dozens of hybrids - by the case to eat raw. Any surplus fruit becomes jam for year-round indulging, but first, a few choice specimens get strewn over one of my most favorite, ridiculously simple treats for highlighting fruit: yeasted cake.

I first made the cake from a recipe in one of my favorite cookbooks, "Simple Desserts" by Ken Haedrich. In the book, he calls it a "Butter Yeast Cake" - essentially a yeast-risen bread dough mixed with enough butter to "shorten" it into the texture of a tender, traditionally egg- or chemically-leavened cake - and uses it almost like a syrup-less baba au rhum, served plain with whipped cream and fruit on the side. It has many predecessors, such as French brioche and German kugelhopf, but where I divert from tradition is by toppling lots of stone fruit wedges over the dough so they bake into it, creating pockets of juicy fruit and concentrating their flavors just enough to enhance their natural sweetness while preserving their freshness.

The soft dough has the strength to hold up the fruit and still remain tender. I surround the dough on all sides with turbinado sugar for crunch to contrast with the soft cake and jammy fruit. Maple syrup - both in the dough and coating the fruit - and orange zest give it a distinctly "breakfast" vibe. It's light, fluffy and not too sweet, the ideal showcase for the most perfect fruit to start your day.

This recipe is meant to be a showcase for the best stone fruit of summer, but it can also be used as a blank canvas for whatever fruit you have on hand (see variations, below, for ideas). If you're the type who wakes up early and doesn't eat breakfast until later in the morning, make this cake all in one go on the morning you plan to serve it. Otherwise, place the covered pan of dough and fruit in the refrigerator to rise overnight before baking the next morning.

5 tablespoons turbinado sugar, such as Sugar in the Raw, divided use

Place the milk into a glass measuring cup or bowl and microwave in 15-second increments until warm to the touch (100 to 105 degrees).

In the bowl of a stand mixer, combine the warmed milk and maple syrup. If using active dry yeast, add the dry yeast and let mixture stand until foamy; 5 to 15 minutes. If mixture does not foam, begin again with new yeast.

If using instant yeast, whisk the yeast into the flour.

Add the whole egg, egg yolk, both extracts and the orange zest to the milk and maple mixture; whisk to combine. Add the flour, attach the dough hook and mix on the lowest speed until all the flour is absorbed and the dough comes together. Increase the speed to medium-low and continue kneading the dough until elastic and smooth, it forms a ball around the hook and begins slapping the side of the bowl.

Scrape the dough off the hook, letting it fall back into the bowl, and scrape the dough from the bottom of the bowl to make sure it is evenly mixed. Sprinkle the butter evenly over the dough, then cover the bowl with a kitchen towel or sheet of plastic wrap. Set aside in a draft-free area until the dough doubles in size, about 1 hour.

Meanwhile, grease a 9-inch springform pan or regular cake pan (or coat with nonstick baking spray). Sprinkle 3 tablespoons of the turbinado sugar into the pan and rotate the pan so the sugar covers the bottom and ½-inch up the side of the pan. Place the pan in the refrigerator or freezer to chill while the dough rises.

Uncover the dough, sprinkle the salt evenly over the dough and return the bowl to the stand mixer fitted with a dough hook. Mix on low speed until the butter and salt are fully incorporated (or stir with a wooden spoon). Scrape the dough into the chilled prepared pan and let stand for 5 to 10 minutes to relax the gluten.

While the dough rests, wash, stem and pit the fruit. Cut it into ½-inch thick wedges; cut any wedges longer than 1 ½ inches in half crosswise. Combine the fruit with the remaining 1 tablespoon maple syrup in a bowl and toss to evenly coat.

Lightly wet your fingers and use them to press the dough evenly over the bottom of the pan as if you were flattening a pizza crust; make sure the middle of the dough isn't thicker than the edge. Use your fingers to lift the fruit from the bowl (to keep its juices in the bowl) and topple it evenly over the dough, arranging it in as even a layer as possible and leaving at least a ½-inch border all the way around. Gently press all the fruit down with your fingertips so it nestles into the dough, creating a slightly-defined edge. Cover the pan with a kitchen towel or sheet of plastic wrap and set aside in a draft-free area until the dough rises to fill two-thirds of the pan's height, about 30 minutes. It may take more or less time depending on how warm your kitchen is.

Uncover the dough and sprinkle 1 ½ tablespoons turbinado sugar on the plain dough edge and sprinkle the remaining ½ tablespoon sugar over the fruit. Bake until deep golden brown at the edge and an instant-read thermometer inserted near the center of the cake reads at least 190 degrees, 25 to 30 minutes.

Jam Cake: Omit the fruit and 1 tablespoon maple syrup it is tossed with. Dollop 1 cup of your favorite jam over the top of the dough, then spread the dollops, connecting them in an even layer and leaving a ½-inch border of plain dough. Proceed with the recipe as written, including the turbinado sugar on top. 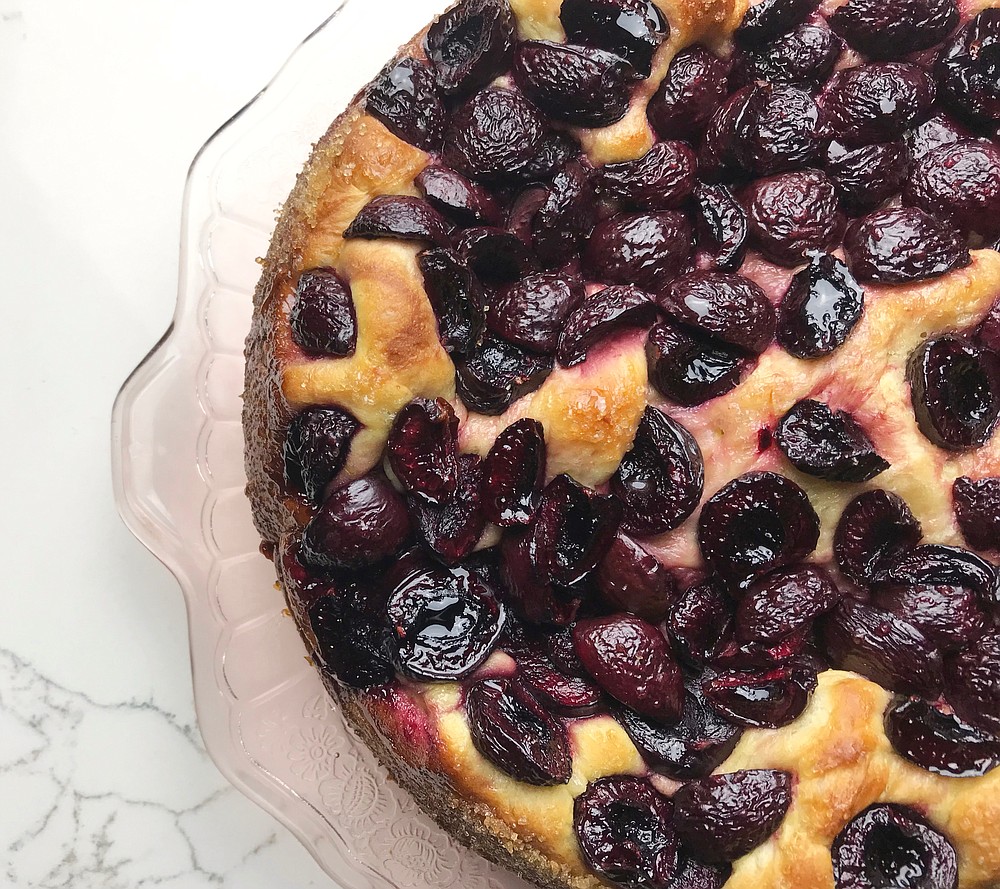 Other fruit: Any fruit that is tender when ripe - whole berries, quartered strawberries and/or chunks of ripe bananas, pineapple or mango - works well as a substitute for the stone fruit. If you want to use apples, rhubarb, fuyu persimmons or other hardy, nonsummertime fruit, roast or saute them until just tender first, then cool them down before mixing with the maple syrup and scattering over the dough. Substitute the orange zest for ground spices like cinnamon, cardamom or ginger to pair with whatever fruit you're using too.