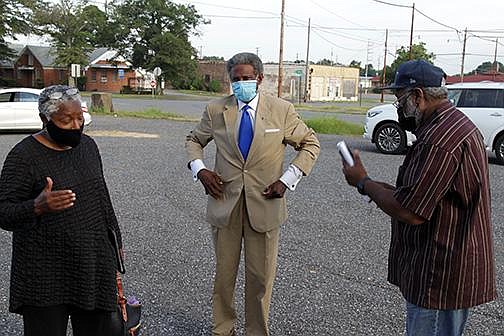 PINE BLUFF -- For the second time in less than a year, Jefferson County Election Commissioners Michael Adam and Stuart "Stu" Soffer have banded together in an attempt to oust an election coordinator appointed by County Judge Gerald Robinson.

In a contentious, half-hour meeting, the two Republican commissioners passed a motion to relieve George Stepps of any duties related to the Election Commission until Adam can meet with Robinson to voice his concerns.

The motion to relieve Stepps was opposed by Commissioner Theodis "Ted" Davis, the lone Democrat on the commission, who expressed confusion over the action.

The special meeting occurred with just about 10 weeks left until Oct. 19, when early voting is to begin in the Nov. 3 election.

The commissioners got into a lengthy debate over whether they could go into executive session to discuss an employee who works for the county judge.

Davis rejected the suggestion on the grounds that because Stepps is not an employee of the commission, an executive session would be improper.

"He has been performing some duties here, is that correct?" Davis asked Adam.

"That is correct," Adam replied.

"Some of those duties have been with the new election equipment, and the last meeting I think the statement was made about Mr. Stepps that he did not have the skill set to perform those duties," Davis said.

After more discussion, Adam moved to act on the question of relieving Stepps, which Soffer seconded and Davis opposed. Then Soffer suggested that the commission consider two letters drafted to Robinson and Stepps, advising them of the action taken by the commission, but said that if Stepps would voluntarily agree to stay away from the Election Commission office, there would be no need to give him the letter.

"That's not my preference," Soffer replied.

"No, it doesn't matter if you've already prepared the letter," Davis insisted. "Obviously this has already been concocted and has been done, so let's keep going."

Adam asked Stepps if he would agree to stay out of the office except during public meetings, at which point Stepps expressed frustration with both Adam and Soffer, saying that since he was hired he had gotten little respect from either man.

"I've never been involved with people like the two of you," Stepps said. "You think I want to come here and look at the two of you with all of that venom in you?"

Davis accused Soffer and Adam of creating a hostile work environment, and gestured toward Joyce Campbell, a local minister who had been hired as election coordinator by former County Judge Booker Clemmons in 2018, and was later relieved of her duties by Adam and Soffer.

"You guys met in executive session in October of 2018 and you did the same thing to that person," Davis said. "That person had been working here as Mr. Stepps has been working here on a daily basis doing the very best job they could do. ... At some point in time this has to cease."

After the meeting, Stepps said he believed two incidents had sparked the confrontation, one which occurred when he agreed to send one of the voting machines to the county clerk's office so officials there could familiarize themselves with it, and the other having to do with Stepps not checking the mail at the office in a timely fashion, even though, he said, he had no access to the mailbox.

"The county cerk's office called me and said they were going to send over a maintenance man to get it," Stepps said. "Before I got here they came over here and encountered Stu, who told them they couldn't be doing that. Then I got an email that says I hadn't checked this mailbox out here and there was a utility bill in there that hadn't been paid. Now first of all, I didn't even know the mailbox was there, but the mailbox has a lock on it and they've never given me a key."

Campbell said after the meeting that she served from April 2018 until October 2018, when she was relieved of her duties. She said she had previously worked as a policy adviser for former Gov. Mike Huckabee and as a corporate vice president for Capital One Bank.

"It was equated that I didn't have the capacity to learn what they were doing here," Campbell said. "I'm technologically literate, I'm computer-literate, I worked for one of the largest banks in the United States, I worked for the governor, I'm well-educated, and to suggest that I can't learn basic stuff, it was ludicrous, in my opinion."

"They did the same thing to George," Davis said. "They said that George doesn't have the skill set to do the job."

"What skill set?" asked Campbell. "Reading, writing, comprehension? What skill set are they referring to? I could never get any specifics from them."

Both Soffer and Adam denied any collusion before the meeting. In an email, Soffer confirmed Stepps' account of the incidents that led to the commission's action, and said he often prepares documents in advance to save time.

"I routinely prepare correspondence in advance of a meeting so it can be signed IF approved," Soffer said in the email. "That facilitates conducting election commission business. In this case, both letters were kept private until the appropriate time. Mike Adam had not seen them. The alternative is make a decision then 30 days later the chairman signs the letter at the next meeting."

In a later email, Soffer confirmed that Stepps was not given a key to the mailbox, but said the key hangs on a hook inside the Election Commission office and was accessible to Stepps.

"If he was getting fussed at for not check (sic) mail, or if he did not have a key, it was a simple matter of asking," Soffer said. "That he did not do."

Adam, in an email, also denied any collusion, although he did say that he and Soffer had been in contact regarding some commission business.

"Commissioner Soffer (Stu) and I had some contact in the day before the meeting but it was about unpaid bills and mail not being picked up every day as Mr. Stepps was supposed to do and that is administrative which falls under me as Chairman," Adam said. "Based on responses to questions I asked Mr. Stepps in a few emails I was very concerned about his job performance and attitude so I decided something needed to be done."

Adam said he has an appointment with Robinson to discuss matters Aug. 17.

Robinson did not respond to two voicemails left by the Arkansas Democrat-Gazette asking for his response.