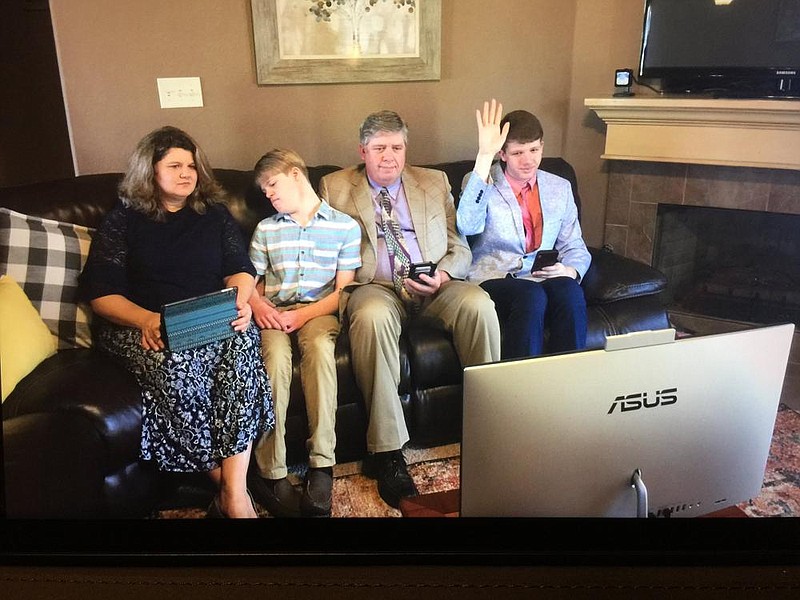 The Hurst family, Sheila (from left), Ezra, Eric and Levi, are seated in front of a computer monitor for virtual Sunday worship with other members of their Jehovah’s Witness congregation. Members of the religion, which is devoted to door-to-door evangelizing, have been practicing their religion virtually since March, when most of its worship houses closed due to the coronavirus pandemic. (Special to the Democrat-Gazette)

Thirteen-year-old Ezra Hurst of Fort Smith has a set routine he carries out during worship services at the Kingdom Hall of Jehovah's Witnesses in their area.

Ezra -- who has autism and Down syndrome and is also nonverbal -- stands with his parents, Eric and Sheila Hurst, and older brother, Levi, during the opening song and prayer. Once the congregation is seated, he sits and removes his shoes until the members stand to sing together once again.

When the Kingdom Hall the Hursts attend -- along with most others worldwide -- closed for in-person services in March and went to a virtual platform, the family wasn't sure what Ezra would make of the family dressing for Sunday services and seating themselves together in front of a computer monitor.

"He recognized that it was the [opening] song, he smiled a lot," said Eric Hurst, recalling Ezra's reaction during their first virtual service. "We sat down to watch [the speaker] and he kicked his shoes off, and in time for the next song he grabbed them."

The Hurst family is one of more than 8.6 million Jehovah's Witnesses globally -- and more than 1.2 million in the United States -- who has shifted, as most religious groups have, to alternate means of worship during the coronavirus pandemic. Recorded sermons, livestreamed services and drive-ins have replaced many in-person gatherings, and virtual platforms facilitate face-to-face interaction for the religion, which is headquartered in New York.

The religion's adherents, who evangelize and recruit new members by going door-to-door, have modified how they practice and share their faith in the months since covid-19 changed worship service protocols. Jehovah's Witnesses have carried through with area-level ministry, worship and international-scale events as they work toward an eventual paradise on Earth restored by Jehovah, as the father of Jesus Christ -- God -- is named in the faith.

"Our love for God and for [our] neighbor has moved Jehovah's Witnesses in Arkansas to adjust to changing circumstances while continuing to have a productive share in the ministry," said Damian Goree, an area spokesman for the religious group. The continued ministry and services, he said, have been a form of continuing spiritual care for Jehovah's Witnesses during the pandemic.

In lieu of door-to-door visits, members have been writing letters and making phone calls, reaching out to area residents using -- for whom they can find -- publicly listed phone numbers and addresses, and conducting Bible discussions with people via Zoom.

"We're still trying to follow in Jesus' footsteps and to spread the good news about God's kingdom that's in the Bible," Sheila Hurst said.

Eric Hurst said that during the pandemic, nonmembers they've approached about their faith have been more responsive to their outreach.

"I think this pandemic really has people thinking about what's going on, and all we get is bad news, seems like ... anymore, so perhaps we'll share some good thoughts with them," he said.

PASSING OF WINE AND BREAD

On April 7, Jehovah's Witnesses commemorated Jesus' death, but this year it was by using Zoom. One of the most important days of the year for adherents, it involves the passing of wine that represents Jesus' blood, and bread representing his flesh.

Members found a way to worship that day and stay connected. For the Hursts, that meant a daughter of a family friend brought around the bread -- unleavened, representing the purity of Christ -- while others made their own.

Goree, who is based in the Alma area, said his Kingdom Hall provided instructions to each family for making the unleavened bread, encouraging family members to make the bread together as a form of worship.

"We had parents with their small children actually making the bread and putting it in the oven, and sending pictures to others, saying, 'This is how my bread turned out.' So it was a beautiful thing," Goree said. "I think the families really benefited from it, and everyone had emblems [as the bread and wine are referred to by the religion] so they could take part in the celebration."

Bread, prepared with safety precautions, was delivered to older members and those in group housing such as nursing homes, Goree said. Those members have been able to dial in to hear services during the pandemic, and service attendance has risen.

Currently, Jehovah's Witnesses are taking part in the first virtual annual convention in the religion's history. The gathering, which features a theme and a program translated into more than 500 languages, typically takes place in a cycle beginning around May each year and finishes in the fall.

Within a few days of the last convention program ending, Goree said, work begins on the next year's convention. Within weeks, venues are reserved and speakers scheduled, while the theme of a convention is chosen several years in advance.

This year, the convention, with the annual theme "Always Rejoice," was set to take place in Little Rock and Fort Smith. The Fort Smith Convention Center has for years hosted the three-day event in that city; instead, the convention is being held on alternate weeks, with the program resuming today.

"Our thing is, we're not going to try to plow ahead and hold these big conventions," Goree said of gathering in person. "This is a staple, this is something we look forward to, but we value safety, so there's got to be another way we can do this."

Members have appreciated the safety-first approach to the convention during the pandemic while acknowledging that it has meant a change of plans. Goree and his wife, Nichole, were set to attend this year's Jehovah's Witnesses annual convention in the Dominican Republic, but instead have stayed in Arkansas. Levi Hurst, 16, recently learned to drive, and like most teenagers isn't visiting any of his friends from various congregations.

"With this [pandemic] ... I won't get to talk to some people that I could have just run into at the Kingdom Hall in the end, but it's been OK," Levi said. "We don't have to get ready and drive every morning ... so I'm thankful for that.

"The car's getting dust on it right now," Sheila Hurst said during a recent family phone interview. "You have days where you go, 'Man, I could stay home all the time,' and other days, you're like, 'I just want to see somebody's face. I want to hug somebody.'

"But then, Scripture says, 'throw your anxieties beyond [God], because he cares for you,'" Sheila added. "Our spirituality right now is what keeps us going despite all the things around us."

In the background on the call, the sound of tapping could be heard. Ezra, Eric Hurst said, was twisting a clothes hanger and tapping it on the floor.

"He likes to be close, he wants to be part of everything," Eric said of his younger son. "He does a lot of repetitive motions. That hanger's his favorite thing to do."

Goree, channeling the convention's theme for the year, said remaining joyful doesn't rely on exterior circumstances, but is rather a "condition of the heart," and that families such as the Hursts believe in joy as a product of God's Holy Spirit.

"You can pick any family from any Kingdom Hall congregation and you'll hear a story of how they maintain their faith," Goree said. "And they're even stronger now than ever before because of seeing the blessings [during the pandemic], and how we're being taken care of spiritually." 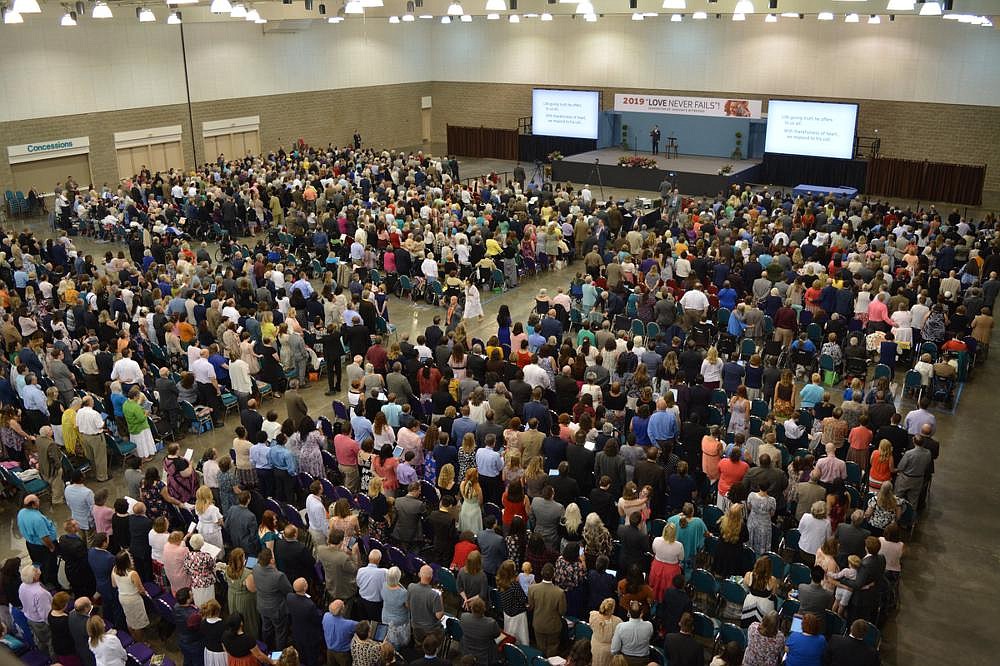 Jehovah’s Witnesses gather at one of the faith’s annual conventions last year at the Fort Smith Convention Center in Fort Smith. The global coronavirus pandemic meant the program, some aspects of which are planned several years in advance, had to make an abrupt shift to an online platform, and be translated into more than 500 languages in a matter of weeks. (Special to the Democrat-Gazette)