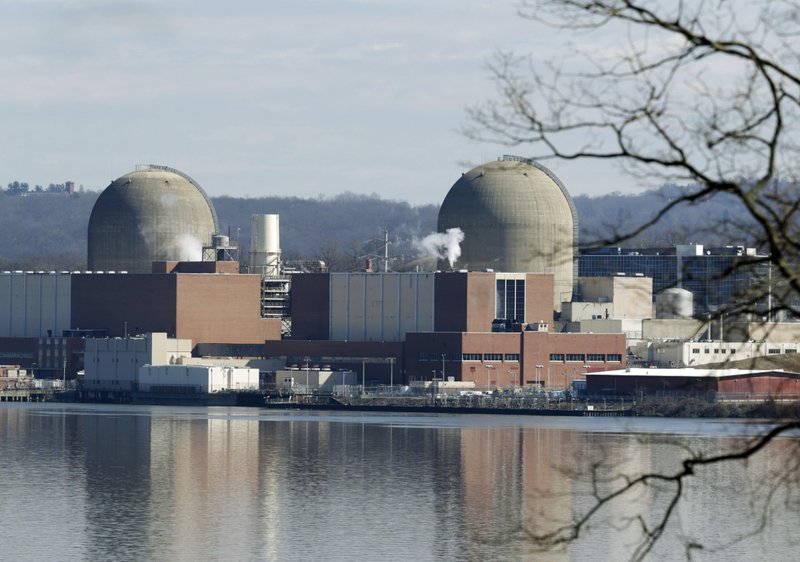 FILE - This Feb. 28, 2017, file photo shows Indian Point Energy Center in Buchanan, N.Y. The 1,020-megawatt Unit 2 reactor at the Indian Point Energy Center along the Hudson River will close for good Thursday, April 30, 2020 and 1,040-megawatt Unit 3 will close in April 2021, as part of a deal reached in January 2017 between Entergy Corp., the state of New York and the environmental group Riverkeeper. (AP Photo/Seth Wenig, File)

ALBANY, N.Y. -- With the push of a red button, one of the two operating reactors at an aging nuclear plant serving millions of people in the New York City area will shut down tonight as federal regulators consider the owner's proposal to sell it to a company that plans to demolish it.

The Unit 2 reactor at the Indian Point Energy Center along the Hudson River will close for good tonight, and Unit 3 will close in April 2021, as part of a deal reached in January 2017 among Entergy Corp., the state and the environmental group Riverkeeper.

The plant generated a quarter of the electricity used in New York City and suburban Westchester County, where the plant sits, in 2017. But the corporation that runs the state's electrical grid concluded that the closure won't impair its ability to keep the lights on because new natural gas plants and efficiency measures are picking up the slack.

Operators will press a button that inserts control rods into the reactor adjacent to the nuclear fuel, Entergy spokesman Jerry Nappi said Tuesday. The control rods absorb neutrons, stopping the fission that creates the energy.

Staffing will be reduced from about 800 to 300 workers about 30 days after Unit 3 shuts down next year, Nappi said.

Gov. Andrew Cuomo, a Democrat, had long sought the shutdown, saying the plant 24 miles north of Manhattan in Buchanan posed too great a risk to millions of people who live and work nearby.

A year ago, Entergy announced a deal to sell the 240-acre plant to the New Jersey-based decommissioning firm Holtec International, which has submitted a dismantling plan to the U.S. Nuclear Regulatory Commission. The plant is to be demolished by the end of 2033 at a projected cost of $2.3 billion.

At an online public information session last week, commission representatives said the commission is reviewing Holtec's financial and technical qualifications, as well as public comments, before approving the license transfer.

According to the commission, Indian Point will join 13 other nuclear power plants across the United States that have begun the decades-long process of decommissioning, which dismantles a facility to the point that it no longer presents a radioactive danger.

Entergy said in a statement that it is committed to continued operation of the five nuclear power plants in its utility business -- one in Arkansas near Russellville, two in Louisiana and one in Mississippi. It shut down its Pilgrim plant in Massachusetts last year and plans to shut down its Palisades plant in Michigan in 2022, both for decommissioning by Holtec.