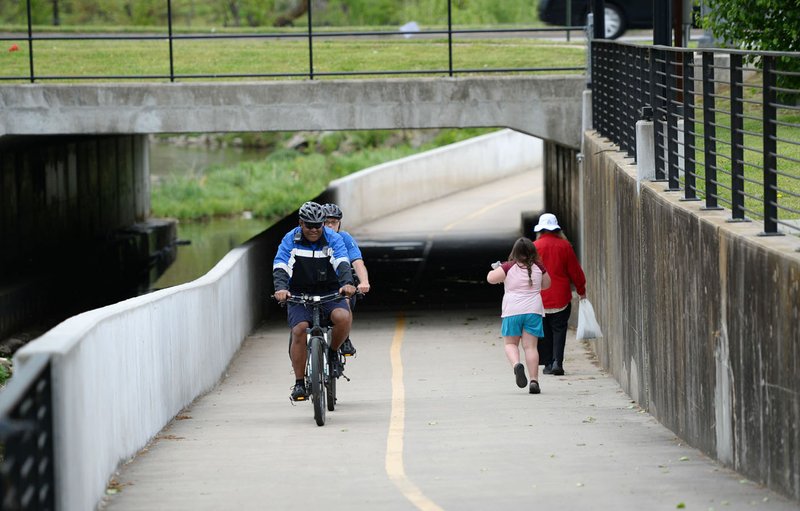 Robert Aini (from left) and Mike Hignite, both with Springdale;s Police Department, ride Wednesday past pedestrians while patrolling along the Razorback Greenway in Springdale. The city's Trails Committee will hear an update on BikeNWA protected bike lanes. Go to nwaonline.com/2004223Daily/ for today's photo gallery. (NWA Democrat-Gazette/Andy Shupe)

SPRINGDALE -- The city's Trails Committee will ask to have the bollards removed along West Maple Avenue and Holcomb Street in the central part of the city. The bollards mark a protected bicycle lane along those streets as part of a yearlong study with BikeNWA.

In their place, the city will install reflectors to mark the bicycle lane, said Brad Baldwin, director of the city's department of engineering and public works. They will cost $2 each, and the city budget can cover the cost, he said.

The City Council will consider the recommendation during its meeting at 6 p.m. Tuesday.

"And as soon as we hear from the council, we are ready to start pulling them up," Baldwin said.

Mayor Doug Sprouse and council member Kathy Jaycox told the committee of the many complaints they have heard over the last 17 months the bollards have been in place. Jaycox represents the council on the Trails Committee.

"We need to do something with the zebras or armadillos or whatever you call them," Sprouse said to the committee. The lane markers earned those nicknames because of their color and shape.

Fayetteville and Siloam Springs also participated in the pilot and have removed the impediments or greatly shortened the distance of the lanes.

Baldwin earlier this month reported Springdale would wait for the data from the pilot before making a decision on removing or modifying the lanes and the markings. He said weather conditions wouldn't allow the work on the infrastructure until spring.

During the year of the project, the city and BikeNWA completed several studies on vehicle speed as well as traffic volume and bicycle use of the lane.

Paxton Roberts, executive director of BikeNWA, shared a preliminary bit of data via slides during the meeting but didn't give a date for the release of the study's complete report.

He said part of the study was a survey of 1,000 residents who traveled along the route. The survey was available for participation on the city's website.

For the respondents who drove on the corridor but hadn't ridden a bicycle in the lane, Roberts reported 56% felt comfortable sharing the road with cyclists, and 67% supported making the protected bicycle lanes permanent.

"Those 1,000 people are those who are the most passionate -- they either love it or hate it," Roberts said. "That's just how projects are.

"We want to provide you with the data to help make decisions," he continued.

Baldwin said the reflectors also will work to keep drivers out of the bicycle lanes.

"When drivers cross over the reflectors, they will feel a light bumping that lets them know they're not where they're supposed to be," Baldwin said.

Baldwin suggested the city could leave the markings and the bollards but also erect signs alerting drivers of the school zone and hospital zone.

"I think it's a good solution for all factors, and those that involve politics particularly," said Dean LaGrone, a member of the committee. 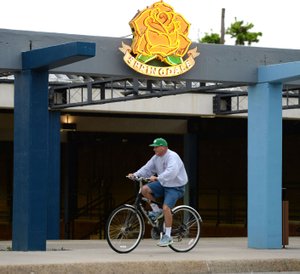