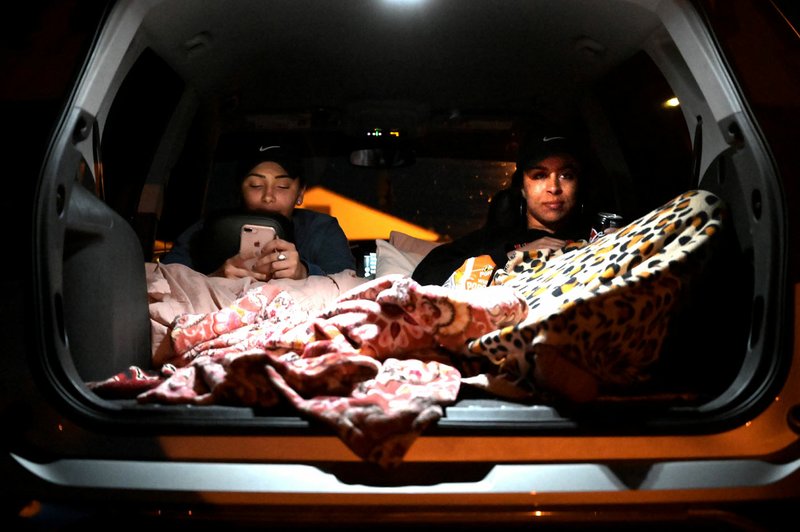 FORT SMITH -- Geese honked overhead as sunlight faded and parents wrapped their children in warm blankets and sleeping bags. Some kids camped atop cars. Others were tucked into the backs of SUVs.

They had gathered Thursday evening for a "carpool cinema" outside Fort Smith Brewing Co.

The idea was a nostalgic, communal entertainment experience that allows for social distancing in this time of pandemic.

"Last night went fantastic!" Goldsmith said Friday. "People got to get out of their houses and feel normal for an evening while continuing to social-distance. Carpool cinema is a fun and safe way to get the community together in these strange times. It was great seeing all the families and couples huddled together in their vehicles enjoying a night at the cinema."

Quentin Willard, the brewery's owner, partnered with Goldsmith and Jesse Fenwick of Jen's Kitty Rehab, who were looking for a spot to show movies outside.

"We were planning simultaneously and independently, so when he saw we were doing it, he contacted us and we joined forces to make it better," Willard said of Goldsmith.

Goldsmith said he sees the carpool cinema as an opportunity to showcase local filmmakers with short films that are five to 20 minutes long.

"Our goal is to connect filmmakers with film fans," he said.

The short films will be shown before the evening's feature film, said Goldsmith.

Willard said he plans to show outdoor films every Thursday night as long as the coronavirus holds sway and social-distancing is recommended.

Willard said he sees it as a way his company can serve the community with jobs, economic development and entertainment during a tough time.

Goldsmith said they license the films through Swank Motion Pictures, which promotes carpool cinemas as a way to help communities "stay connected and engaged during this uncertain time by hosting a nostalgic movie event in your parking lot."

It's not a "drive-in movie," said Goldsmith. That's a commercial endeavor. Carpool cinema is a community gathering.

Chris Segrin, a behavioral scientist and professor of communication at the University of Arizona, told the Arkansas Democrat-Gazette on Saturday that people can have a "communal experience" by being in the presence of other people, even if they are not directly interacting with them.

"Think of being at a sporting event," said Segrin. "You may not say a word to the person sitting on either side of you, but being at the game as part of the crowd is still a meaningful experience, especially when there is a key play in the game and everybody collectively cheers. Such experiences are probably not as fulfilling as direct interaction with other people, but they still can help people to feel connected with others and part of a larger community."

The movies are free to watch but the vehicle space is limited and reservations are required.

On the brewery's Facebook page, the rules were explained earlier: "You have to stay within the footprint of your vehicle, so bring pillows or whatever you need to be comfortable in there."

Bathrooms were available, but no more than three people could enter those rooms at a time.

"If you have a cough or fever or any symptoms other than your normal self, please stay home!" the Facebook post read.

Three dozen vehicles packed the brewery's parking lot for its first carpool cinema on Thursday. Moviegoers bought popcorn, pulled-pork nachos and sandwiches, soda, candy, beer and wine -- with the alcoholic beverages being delivered to the vehicles in sealed containers.

A 32-foot-wide screen was hung in front of the brewery building, which housed the PX at Fort Chaffee. It's two blocks from the Chaffee Barbershop Museum, where Elvis Presley got his hair cut when he was drafted into the Army in 1958.

Viewers could hear the movie's audio by tuning to a particular radio station.

Matt Caldwell said his kids were excited to be there.

Chris Drost said his kids had been going to day care, but they hadn't had a chance recently to go anywhere as a family.

The first film was Batman: The Scheme is Sound, which starred kids from Parkview Elementary School in Van Buren and was directed by Kevin Croxton, an Emmy-award winning composer and music teacher.

In the 12-minute film, the owner of Gotham City's largest dishwasher manufacturer is abducted. Batman and Robin are captured, too, along with a scientist specializing in loud speakers.

Catwoman goes to the rescue, hitting a power chord on an electric guitar that transmits a "Kapow!" through the "speaker of doom," rendering all the evildoers unconscious.

It was followed by the feature film A Beautiful Day in the Neighborhood starring Tom Hanks.

The Rev. Steven Kurtz, pastor at Central Presbyterian Church in Fort Smith, said it was a good excuse to get out of the house. Before the coronavirus, Kurtz, who plays guitar, would go to the brewery on the last Sunday of each month for a jam session with other musicians.

"You know, Mr. Rogers was a Presbyterian minister," said Kurtz, referring to Fred Rogers, the creator and host of the children's television show Mister Rogers' Neighborhood, which ran from 1968 to 2001.

On Friday, Willard said "all went well" at the premiere the previous night.

"Everyone was mature, stayed in the vehicles, followed protocol to keep everyone safe," he said. "We've identified things to improve to make it more seamless and more safe."

Next Thursday, the feature film with be The Peanut Butter Falcon.

But the spaces are already booked.

"We have a long list of people waiting to catch a movie, so reservations are closed for now," according to the brewery's Facebook page. "As we grow this event, we'll create more showings for everyone to be included."

Goldsmith said he's looking for some Arkansas-made feature-length films to show at the outdoor cinema. People can submit films through the River Valley Film Society's Facebook page or its website, rivervalleyfilmsociety.com.