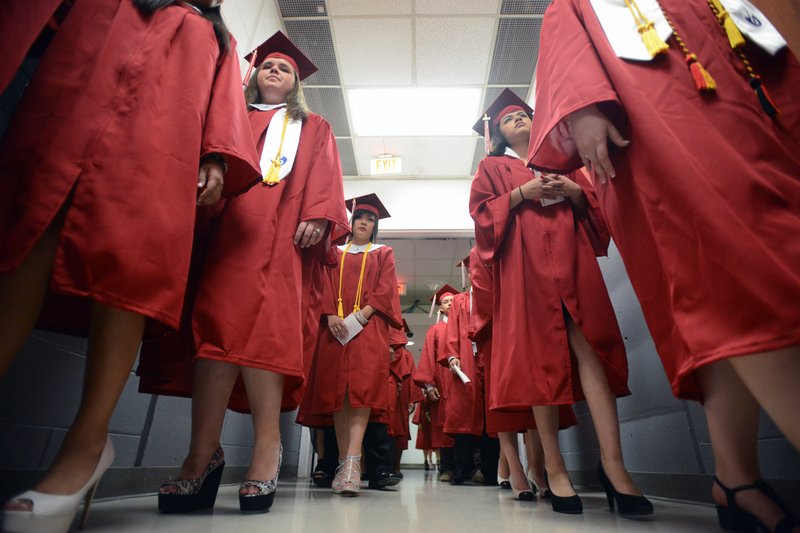 BENTONVILLE -- School districts have yet to decide what to do about graduation ceremonies this spring for Northwest Arkansas high schools.

Graduation was one of several topics discussed during Thursday's meeting of the Northwest Arkansas Education Service Cooperative board, which consists of superintendents of school districts in Benton and Washington counties. The board met via video conference.

Bud Walton Arena at the University of Arkansas was originally scheduled to host commencement for each of these schools on these dates. Alternative arrangements will have to be made because the arena is no longer available in May because of the coronavirus.

The coronavirus outbreak has canceled countless events this spring, but no superintendent said graduation ceremonies were canceled.

"For us, we're just delaying, looking at options," said Bentonville Superintendent Debbie Jones. "Realistically, I don't think we're going to be able to have anything before July, if July's even a possibility. But we're not ready to say everything's canceled."

Seven high schools in Bentonville, Fayetteville, Rogers and Springdale scheduled ceremonies from May 14-16 at Bud Walton Arena at the University of Arkansas.

The university postponed until at least June 1 all of its commencements and informed the school districts facilities on campus wouldn't be available.

That decision was made in light of guidelines from the Centers for Disease Control and Prevention regarding the spread of covid-19 and to be consistent with the university's decision on its own spring commencements, according to the email written by Patrick Dale, assistant athletic director.

"We are heartbroken for the senior classes of 2020 that we will not be able to host this important life achievement on the University of Arkansas campus," Dale wrote. "We do feel this is in the best interest of those graduating seniors, their parents, staff, and teachers to make this communication at this time, to allow as much time as possible for each school to make alternate plans related to graduation ceremonies."

"We're leaving all options open at this time, and when we're cleared to have events or we see that the clearing is coming, we will make preparations as we can," Jones said.

John L Colbert, superintendent of Fayetteville schools, said they aren't ready to make a decision. Superintendents of the Elkins, Decatur, Lincoln, Pea Ridge and Prairie Grove districts all confirmed they intend to postpone their ceremonies.

The Rogers School District is postponing ceremonies and considering alternatives, according to Ashley Siwiec, director of communications.

Springdale's graduations haven't been officially postponed, although alternate sites for Springdale and Har-Ber high schools will have to be determined because they were going to be at Walton Arena, said Rick Schaeffer, the district's communications director.

There have been no postponements because Gov. Asa Hutchinson hasn't extended the closing of schools beyond April 17, Schaeffer said.

Superintendents participating in Thursday's meeting also discussed what's expected of seniors for the rest of this academic year.

The Arkansas Department of Education put out a tweet on March 21 saying seniors on track to graduate and in good standing as of the third nine weeks reporting period "will be considered 'as meeting the graduation requirements' for the state of Arkansas."

A follow-up tweet by the department stated, "School districts may still implement local policies for honor graduates and class rank and should make local decisions regarding end of year engagement for current high school seniors regarding graduation."

West Fork Superintendent John Karnes asked fellow superintendents, "Is anyone cutting their seniors loose at this point, or is everyone still trying to get work out of them?"

Karnes said the department's announcement caused some confusion among seniors and their parents.

"We've had kids citing the statement from the Department of Ed to us, repeating it to us -- even had a few parents calling us out on that," he said.

Jones said Bentonville isn't letting seniors off the hook. If they are in the middle of a class that's required for their graduation, they have to finish that class. Seniors who think they completed graduation requirements last semester may go through their counselor for confirmation, she said.

Allowing seniors to skip out on the rest of the year could put them in jeopardy of losing scholarship opportunities or eligibility with the NCAA, Jones said.

"So we are proceeding as if it's business as usual for us," she said.

The same is true in Fayetteville, Colbert said.