Arkansas' toll climbs to 14; no shutdown directive from U.S., Hutchinson points out 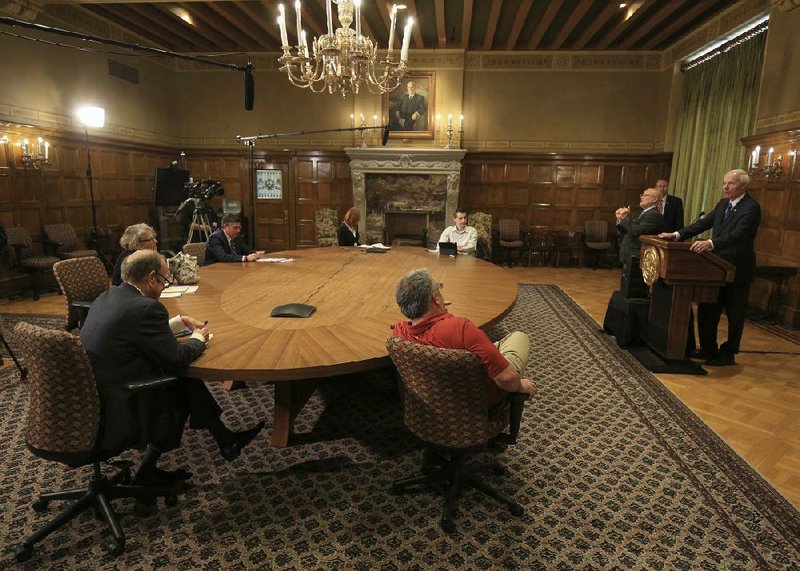 Gov. Asa Hutchinson holds his daily corona virus briefing Friday at the state Capitol. He continued to resist issuing a stay-at-home order for the state, arguing that calls for such action by federal health officials are not “an appropriate or necessary step.” (Arkansas Democrat-Gazette/Staton Breidenthal).

[SATURDAY UPDATE: Commercial lodgings and short-term rentals in Arkansas have been directed not to provide occupancy to recreational travelers from out of state, and the number of confirmed cases of coronavirus in the state has risen to 743, Gov. Asa Hutchinson said Saturday. Read more here » arkansasonline.com/news/2020/apr/04/watch-live-130-pm-governor-state-health-officials-/]

Two more Arkansans died of the coronavirus on Friday as Gov. Asa Hutchinson responded to comments from the federal government's top infectious-disease expert a day earlier suggesting that all states should have stay-at-home orders in place.

The state's death toll from the pandemic rose to 14, while the number of identified cases went up by 55 to 738. The state's first case was identified March 11.

To limit the spread of the virus, Hutchinson has closed public schools through at least April 17, limited restaurants to takeout and delivery only and indefinitely closed movie theaters, bowling alleys, casinos, hair salons and other businesses.

Hutchinson said Friday evening that he also would order a Jonesboro church that has continued to meet to stop holding large group gatherings.

A March 26 directive prohibiting indoor gatherings of more than 10 people does not apply to places of worship and certain other locations, such as factories and government bodies, but it gives the secretary of the Department of Health the discretion to exercise his authority even for those venues if he believes the public's health is at risk.

The Arkansas Supreme Court, which had canceled in-person court appearances in nonessential cases on March 17, extended those restrictions until May 1 in an order handed down Thursday. The court also canceled jury trials until June 30. The order applies to circuit and district courts.

Hutchinson so far has resisted a broader order shutting down all nonessential businesses, such as ones, according to a count by The New York Times, that have been issued in 39 states and parts of six others, with Texas joining the list of states with statewide orders this week.

During a town hall on CNN on Thursday evening, Anthony Fauci, a member of the White House coronavirus task force, questioned why all states haven't issued such an order.

[Video not showing up above? Click here to watch » https://www.youtube.com/watch?v=J77lQnpFvOA]

"I don't understand why that's not happening," Fauci, director of the National Institute of Allergy and Infectious Diseases, said in response to a viewer question.

"As you said, you know, the tension between federally mandated versus states' rights to do what they want is something I don't want to get into.

"But if you look at what's going on in this country, I just don't understand why we're not doing that. We really should be."

Hutchinson suggested Friday that Fauci didn't have Arkansas' situation in mind when he made those comments.

"You've got to have some sympathy for him, a lot of sympathy for him, and respect for the challenge that he has in front of him with New York and the incredible, disheartening tragedy that's happening there in that city, with the pressure from Connecticut and the Maryland area," the Republican governor said.

"That's what he's visually looking at and thinking about every day, and with what's happened on the West Coast as well, and so it's understandable that he looks at that as a solution, a nationwide shutdown order.

"What's important is that that has not been given."

Hutchinson said he has been checking guidance from the U.S. Centers for Disease Control and Prevention, which he said "has not indicated that that's an appropriate or necessary step."

State Health Secretary Nate Smith said that if Fauci had the time during the global pandemic, he would like to go over Arkansas' numbers with him and have him explain "how much more we could expect with a stay-at-home order and how much it would cost us."

"As I look at those numbers, it seems like we are doing at least as well as any other state, so there doesn't seem to be a compelling reason to do a stay-at-home order here in Arkansas, and Arkansas is not the same as New York City or some of these other parts of the country," Smith said.

Those projections predicted that the state would have about 1,500 cases by Friday, with the number reaching 3,500 by the end of next week.

Although testing has been limited by a nationwide shortage of needed materials, Smith has said Arkansas' testing capacity has grown since the projections were made.

With almost 10,000 tests conducted, "I feel like at this point we have a good sample, so we know our trajectory," Smith said.

That's reinforced, he said, by the fact that the growth in known cases "mirrors the trajectory of our hospitalizations."

"Although we might miss cases of people walking out there with no symptoms or mild symptoms, we're not missing hospitalizations," Smith said.

"When people come in [to the hospital] with symptoms, they do get tested."

The number of positive test results in a single day reached a high of 76 on March 25, then dropped sharply before rebounding somewhat.

Over the past few days, the number has been hovering around 60 each day.

The test results received each day vary, largely depending on the number that come in from commercial laboratories outside the state.

According to data from the Covid Tracking Project, which collects information from health departments around the country, the number of new test results received in Arkansas peaked at 2,282 on Monday.

On Friday, Smith said that the state had received 658 results since the previous afternoon. There were 144 from the Health Department's laboratory, 62 from the University of Arkansas for Medical Sciences and 452 from commercial labs.

UAMS Chancellor Cam Patterson said a van converted into a "mobile testing unit" made its first trip on Thursday, to Helena-West Helena, where 123 people were screened for symptoms and 30 people were tested.

The Covid Tracking Project showed that Arkansas, as of Friday afternoon, ranked 36th among the states and the District of Columbia in both the number of coronavirus tests it had completed in proportion to its population and the number of identified cases per 10,000 residents.

With 12 deaths at that time, the state's number of deaths per 10,000 residents was the 37th-highest.

New York, with almost 3,000 deaths at that time, ranked first in completed tests, positive test results and deaths per 10,000 residents.

Patricia Jacuzzi, 70, of Benton and Peggy Tyner, also 70, of Little Rock were the latest Arkansans to die of the covid-19 illness.

Hobbs also identified the 12th Arkansan to die as DeVonte Sargent, 25, of Conway -- the youngest person in the state to die from the disease so far.

The obituary for Frances Bovick Jansen, 94, a resident of Briarwood Nursing and Rehabilitation in Little Rock, said she had died Wednesday of complications from covid-19, indicating she was the 11th person in Arkansas to die in the outbreak.

Hobbs said she died shortly after 9 p.m. that day.

"Our family wishes to recognize the dedicated nurses, CNAs, administrators and all of the other workers at Briarwood Nursing and Rehab in Little Rock," the obituary says. "Your unselfish devotion and relentless efforts will forever be in our hearts."

Jansen was the second resident at the nursing home to die from the disease. A total of 37 residents and 15 staff members there have tested positive for the virus.

The virus had spread Friday evening to 61 of the state's 75 counties, with the first cases reported in Lafayette and Prairie counties.

Arkansas Children's Hospital spokesman Hilary DeMillo said two physicians and one nurse are also among 96 health care workers in the state who have tested positive.

That's in addition to a UAMS resident who tested positive after working a rotation at the hospital in March.

"We're working in real-time with experts in areas across the nation that have already surged, as well as the CDC and the Arkansas Department of Health, to update [personal protective equipment] plans and other practices to protect our teams," DeMillo said.

Two of those who had tested positive since the previous afternoon were residents of the Lakes of Maumelle Health and Rehabilitation, where a staff member tested positive earlier, Smith said.

In Pulaski County, which has the highest total, the number of cases increased by 11, to 137, from the previous evening.

As of Friday afternoon, the number of people who were hospitalized with covid-19 had increased by five from the previous afternoon, to 71.

The number of those patients who were on ventilators increased by three, to 26.

Of all the patients who have been on a ventilator at some point, five have been taken off and nine died, Smith said.

Illustrating the danger virus poses to those with underlying conditions, he said Arkansans with diabetes made up 8.5% of the state's cases, but 30% of those who were hospitalized and 38% of those who had been placed in intensive care.

Similarly, Arkansans with heart disease made up 7.7% of all coronavirus cases but 23% of those hospitalized and 27% of those placed in intensive care.

For lung disease, it was 4.4% of all patients, but 14% of those hospitalized and 16% of those placed in intensive care.

For kidney disease, it was 2.1% of all cases, 8% of those hospitalized and 11% of those who had been placed in intensive care.

In a joint news release Friday, most members of Arkansas' congressional delegation urged haste on the part of the U.S. Department of Labor to help Arkansas and other states administer expanded unemployment benefits and other parts of Congress' covid-19 legislative package.

"As many businesses close to adhere to social distancing policies, employees and owners of those companies are experiencing hardship from lost income," U.S. Reps. Rick Crawford, French Hill, Bruce Westerman and Steve Womack wrote in a letter joined by U.S. Sen. John Boozman, all Republicans.

While states are working on unemployment claims on their end, the federal department hasn't yet issued guidelines for payments to the self-employed, "gig" workers and other classes of wage earners, they said.

In one piece of good news, UAMS' Patterson said the first of several shipments of protective medical gear that the state has purchased in China arrived in the state Friday, along with 550 gallons of hand sanitizer donated by L'Oreal from its factory in North Little Rock.

The cosmetics company had never made hand sanitizer before, but agreed to produce 550 gallons a week and donate it for use by health care workers in the state, said Patterson, who's a cardiologist.

"That's an example of people stepping up to the plate," he said.

Information for this article was contributed by Eric Besson, Frank Lockwood, John Moritz, and Stephen Steed of the Arkansas Democrat-Gazette. 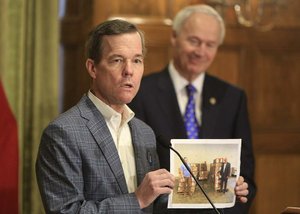 Dr. Cam Patterson, chancellor of the University of Arkansas for Medical Sciences, holds a photo of members of his procurement team Friday at the state Capitol during the daily coronavirus briefing. More photos at arkansasonline.com/44gov/. (Arkansas Democrat-Gazette/Staton Breidenthal). 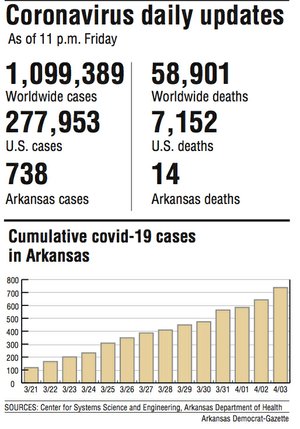