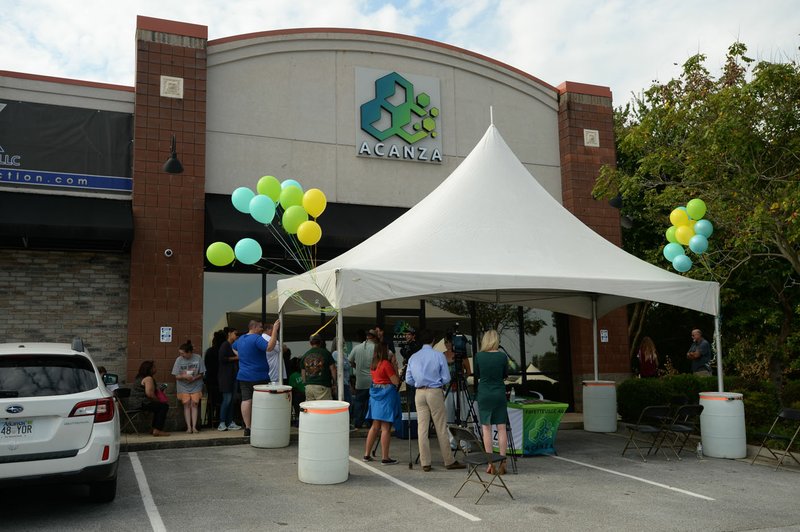 "I'm just grateful we can provide the relief to these patients," said Randi Hernandez, owner of Acanza, 2733 N. McConnell Ave.

• Be an Arkansas resident with proof of residency

The dispensary opened Saturday and had a steady stream of customers throughout the weekend, she said.

Acanza sold about 10 pounds of medical marijuana as of Tuesday morning, said Scott Hardin, spokesman at the Arkansas Department of Finance and Administration.

Rebecca Barry, 51, of Fayetteville said she bought medical marijuana Tuesday to treat her insomnia and fibromyalgia, she said.

"For me, it's life-changing because, without it, I would be on disability, or I would be buying it off the streets," she said.

Barry said she feels safe buying from a dispensary because the marijuana is regulated, and she isn't worried about what might be in it.

Other medications caused allergic reactions and side effects, including depression, she said.

Acanza is Northwest Arkansas' third dispensary to open and the ninth in the state.

ReLeaf served an estimated 287 customers its opening day, while The Source had about 160 customers on opening day.

The dispensary is the first phase of the business, Hernandez said. She has plans for Acanza to also be a cultivation site and processor.

A patient or caregiver ID card is necessary to buy medical marijuana products.

More than 22,000 people in the state had the cards as of Friday, according to the Arkansas Department of Health.

Another dispensary, Purspirit Cannabis, is projected to open by Nov. 1 at 3390 Martin Luther King Jr. Blvd., a representative of the company has said.