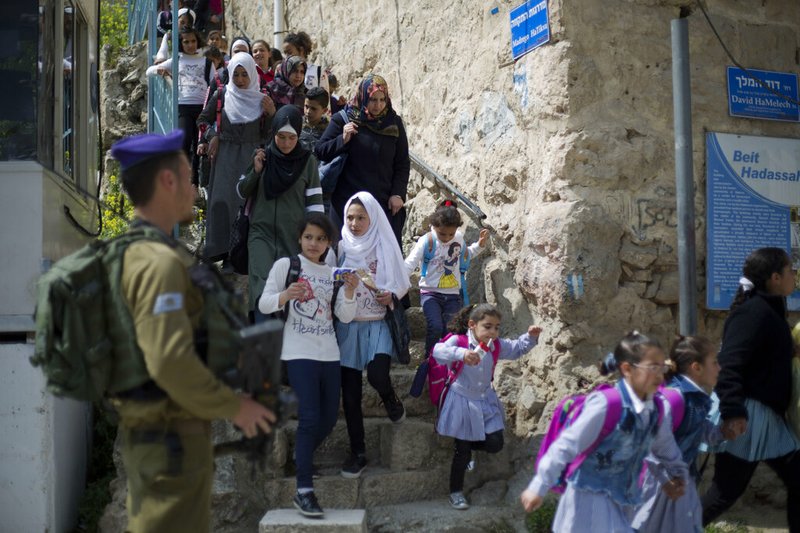 FILE - In this March 21, 2019 file photo, an Israeli solider stands guard as Palestinian school children cross back from school in the Israeli controlled part of the West Bank city of Hebron. Israeli Prime Minister Benjamin Netanyahu vowed Monday Sept. 16, 2019, to annex "all the settlements" in the West Bank, including one in Hebron, an enclave deep in the heart of the largest Palestinian city, in a last-ditch move that appeared aimed at shoring up nationalist support the day before a do-over election. (AP Photo/Ariel Schalit, File)

JERUSALEM -- Israeli Prime Minister Benjamin Netanyahu vowed Monday to annex "all the settlements" in the West Bank, including an enclave deep in the heart of the largest Palestinian city, in a last-ditch move that appeared aimed at shoring up nationalist support the day before a do-over election.

Locked in a razor tight race and with legal woes hanging over him, Netanyahu is fighting for his political survival. In the final weeks of his campaign he has been doling out hard-line promises meant to draw more voters to his Likud party and re-elect him in Tuesday's unprecedented repeat vote.

"I intend to extend sovereignty on all the settlements and the (settlement) blocs," including "sites that have security importance or are important to Israel's heritage," Netanyahu said in an interview with Israeli Army Radio, part of an eleventh-hour media blitz.

Asked if that included the hundreds of Jews who live under heavy military guard amid tens of thousands of Palestinians in the volatile city of Hebron, Netanyahu responded "of course."

Israelis head to the polls Tuesday in the second election this year, after Netanyahu failed to cobble together a coalition following April's vote, sparking the dissolution of parliament.

Netanyahu has made a series of ambitious pledges in a bid to whip up support, including a promise to annex the Jordan Valley, an area even moderate Israelis view as strategic but which the Palestinians consider the breadbasket of any future state.

To protest that announcement, the Palestinian Authority held a Cabinet meeting in the Jordan Valley village of Fasayil on Monday, a day after Israel's Cabinet met elsewhere in the valley.

"The Jordan Valley is part of Palestinian lands and any settlement or annexation is illegal," Prime Minister Mohammed Shtayyeh said at the start of the meeting. "We will sue Israel in international courts for exploiting our land and we will continue our struggle against the occupation on the ground and in international forums."

Critics contend that Netanyahu's pledges, if carried out, would enflame the Middle East and eliminate any remaining Palestinian hope of establishing a separate state. His political rivals have dismissed his talk of annexation as an election ploy noting that he has refrained from annexing any territory during his more than a decade in power.

Israel captured the West Bank and east Jerusalem from Jordan in the 1967 war.

Over 2.5 million Palestinians now live in occupied territories, in addition to nearly 700,000 Jewish settlers. Israel already has annexed east Jerusalem in a move that is not internationally recognized. The international community, along with the Palestinians, overwhelmingly considers Israeli settlements in the West Bank and east Jerusalem illegal.

Tuesday's vote will largely be a referendum on Netanyahu, who this year surpassed Israel's founding prime minister as the country's longest-serving leader.

He has cast himself as the only candidate capable of facing Israel's myriad challenges. But his opponents say his legal troubles -- including a recommendation by the attorney general to indict him on bribery, fraud and breach of trust charges -- loom too large for him to carry on.

Print Headline: Israeli PM vows to annex 'all the settlements' in West Bank