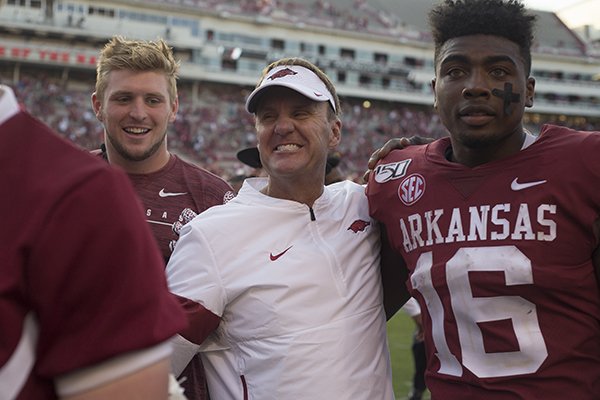 On Saturday, after the Rams rallied from a 14-point deficit to tie the game late in the third quarter, the University of Arkansas rose to the challenge.

Devwah Whaley blasted in for 5-yard touchdown run to break a 34-34 tie with 8:52 left, then Cheyenne O'Grady added a tackle-breaking 62-yard touchdown reception and Ladarrius Bishop scored on a fumble return as the Razorbacks surged to a 55-34 victory before an announced crowd of 55,583 at Reynolds Razorback Stadium.

"The score was tied 34-34, and we called them up and we just kept talking about one play at a time ... and it's one response at a time, so that was great to see," Arkansas Coach Chad Morris said. "Especially with what happened a year ago. Our guys, they weren't going to let that happen again."

Arkansas (2-1) tied its highest scoring output from the Morris era, equaling a 55-20 victory over Eastern Illinois in his debut game in 2018. The Razorbacks also rebounded from a 31-17 loss at Ole Miss to open SEC play last week.

Nick Starkel, in his first start for the Razorbacks, passed for 305 yards and three touchdowns with no interceptions while providing the kind of jolt Arkansas needed after scoring 37 points in its first two games combined.

Tailback Rakeem Boyd rushed for a career-high 122 yards and two touchdowns, and Trey Knox, Chase Harrell and O'Grady caught scoring passes for the Razorbacks, who are 2-1 through three games for the first time since the 2016 team opened 3-0.

[Video not showing up above? Click here to watch » https://www.youtube.com/watch?v=0QP_PWYJ-AA]

Arkansas also chalked up a season-best 520 yards and converted 6 of 12 third-down plays. The Rams gouged them for 220 rushing yards, including Marvin Kinsey's 75-yard touchdown run on the second snap of the day, and racked up 425 yards.

Colorado State (1-2) scored the final 25 points on Arkansas in last year's 34-27 comeback win in Fort Collins, Colo., but the Rams had no fourth-quarter magic in this one after scoring on a broken play late in the third period to tie the score.

"We stepped up, made a play to get it tied, and got a chance there to take a lead, and then we didn't answer when we had a chance to really put a dagger in those guys," Colorado State Coach Mike Bobo said.

Quarterback Patrick O'Brien -- in for injured starter Collin Hill, who suffered another knee injury, was flushed from the pocket but kept his composure and found freshman Dante Wright deep down the Arkansas sideline. Wright made the catch around the UA 40 in a jump ball against Arkansas safety Myles Mason, then raced to the end zone for a 75-yard touchdown to tie the game 34-34 with 2:26 left in the third quarter.

Arkansas linebacker De'Jon Harris summoned the defense after that fluky score -- on the same sideline and end zone that Portland State scored on a late broken-play touchdown in the season opener -- and told the younger players it was time to grow up.

"I appreciate those guys responding to me," Harris said. "But it's a big jump from last year, just flipping it for us and having this win."

Said O'Grady: "A lot of us know, the old Hogs, we didn't know how to respond. We got down, the energy lowered. This year, I just think we all came together as a team, defense and offense."

Colorado State forced an Arkansas punt after holding Boyd short on a third-and-2 play and drove to the Arkansas 32 with a chance to grab the lead early in the fourth quarter. But kicker Cayden Camper pulled a 50-yard field goal try wide left with 11:35 left, and the Hogs took command from there.

Whaley's 5-yard touchdown capped a 68-yard drive on which Starkel hit Knox and Treylon Burks on consecutive pass plays that covered 12, 17 and 20 yards. The last of those took the Razorbacks to the Colorado State 19. Whaley, who ran for 81 yards, powered through at left guard five plays later to put the Hogs ahead for good.

O'Grady made sure the lead would hold after catching a well-designed pass near the left sideline from Starkel to convert on a second and 9 from the Arkansas 38. Five different Rams players, some of whom were trying to strip the ball, hit O'Grady in Colorado State territory, but the senior from Fayetteville kept chugging. He eventually broke free of all the tacklers and finished up the 62-yard score.

"I think it was a pride thing," O'Grady said. "I really wanted to get into the end zone. Probably wasn't the smartest thing to do given that we had the lead and they were obviously trying to strip the ball out. But I fought to stay up and ended up slipping out. By the time I got to the end zone, I couldn't breathe, so I couldn't even celebrate."

Facing a third and 21 after Richardson's 10-yard sack, O'Brien threw a check down to Kinsey, who was quickly surrounded. Henry flew in from the back side and delivered a crushing blow, which caused Kinsey to lose his second fumble of the day. Bishop scooped up a handy bounce and sprinted untouched for a 25-yard touchdown to cap the Hogs' frenzied fourth-quarter blitz.

The Razorbacks scored a touchdown on its opening drive for the first time since Boyd capped a 75-yard march with a 5-yard score against Vanderbilt on Oct. 27.

Starkel threw a 38-yard strike to Burks on Arkansas' first snap to set the tone, then connected with Knox for a 24-yard fade pass touchdown against tight coverage.

"I said it last week, I could care less how many yards we have if we get a 'W' at the end of the day," Starkel said. "But as an offense with weapons in the backfield and spread out wide, then with a hand in the ground, there's not a lot that we can't do.

"We can do a lot: Stretch the field vertically and then spread it wide, the speed of our backs and how we can get around people. Our offense is just kind of getting started right now."

Boyd and Whaley both had big games. Boyd had his first two-touchdown game for the Razorbacks and scored on a 59-yard run up the middle to put Arkansas up 21-7 with 5:59 left in a wild opening period. He added a 4-yard touchdown to give the Razorbacks a 34-24 lead on its first series of the second half. He averaged 6.1 yards per carry.

Knox had 6 catches for 90 yards and his first college score, while Burks added a game-high 92 yards on 4 catches.

The teams combined for 428 yards in a break-neck opening quarter that ended with Arkansas on top 24-14 after Connor Limpert's 54-yard field goal.