Arkadelphia storms past Wynne in second half 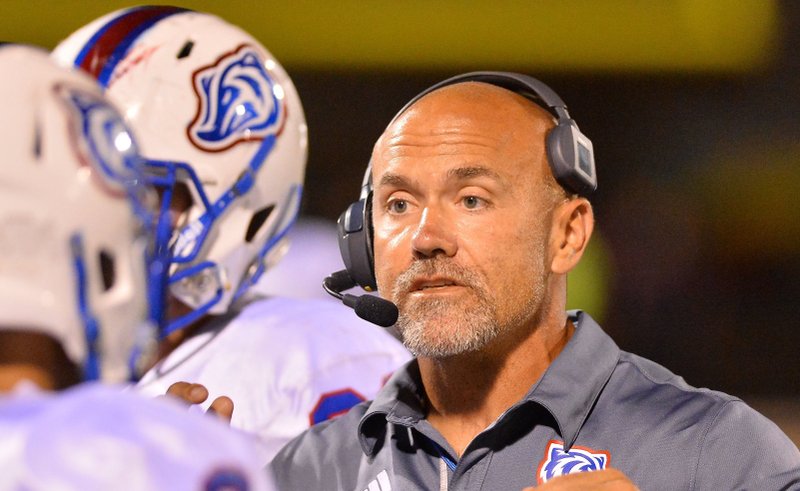 ARKADELPHIA -- The Arkadelphia Badgers weren't worried about a two-possession deficit.

Instead, the two-time defending Class 4A state champions rallied to defeat the Wynne Yellowjackets 51-31 on Thursday night at Badger Stadium.

From there, it was all Arkadelphia.

The Badgers outscored the Yellowjackets 37-8 the rest of the game and forced three turnovers in that span.

"It took us a while to get adjusted to the speed of the game," Arkadelphia Coach J.R. Eldridge said. "In the second half, [defensive coordinator Chris] Kizer did an excellent job of tweaking what we were doing a little bit. Then our players bought in and did what they were coached to do.

Arkadelphia (3-0) is one year removed from starting 0-5 on its way to a second consecutive Class 4A state title. The Badgers have defeated three teams above their classification in this year's nonconference schedule, including Wynne of Class 5A and Class 6A members Sylvan Hills and Benton.

Thursday's game was the second in a row that the Badgers had to come back from a second-half deficit. They were trailing 20-13 last Friday at Benton, then went on to win 33-20.

"We've been there before," Arkadelphia senior quarterback Cannon Turner said. "I think that really helps. We've got a lot of character on this team."

Senior running back Kyren Harrison rushed for 221 yards and 2 touchdowns on 16 carries for Arkadelphia, which finished with 512 yards offensively.

Turner, who is in his fourth year as the Badgers' starter, passed for 84 yards and 1 touchdown, rushed for 102 yards and another score, and returned the opening kickoff 88 yards for his team's first score.

Arkadelphia pulled within 23-21 with 4:53 left in the third quarter on junior Braeden Thomas' 33-yard touchdown run. Thomas finished with 61 rushing yards and 2 touchdowns.

After the Badgers forced a Yellowjackets punt, they took their first lead of the second half with Turner's 12-yard scoring run and Harrison's two-point conversion run, which made it 29-23 with 2:27 remaining in the third quarter.

Wynne drove to the Arkadelphia 28 early in the fourth quarter, but junior Spencer Parker fumbled and Badgers senior linebacker Sam Hawthorne recovered at the Badgers 26.

Spencer Parker fumbled at the Wynne 16 on his team's next possession and Arkadelphia junior defensive lineman Elijah Wheeler recovered. The turnover set up Turner's 13-yard touchdown pass to sophomore Jaishon Davis for a 44-23 advantage with 8:05 remaining.

The Yellowjackets led 20-14 at halftime, with rushing touchdowns of 10 yards apiece by senior Kavion Alston and junior Marterius Ross, as well as a 1-yard run from Holden Parker. They controlled the clock in the first half with the triple option offense with a 14:55-9:05 advantage.

But Wynne was undone by its struggles in the second half as well as having two potential touchdowns called back because of penalties, to the disappointment of Coach Van Paschal.

"I'm disappointed that it turned into a ballgame," Paschal said. "Arkadelphia, they're a good football team. They don't need help, honestly. We'll see how it goes from here."

Print Headline: Arkadelphia storms past Wynne in second half