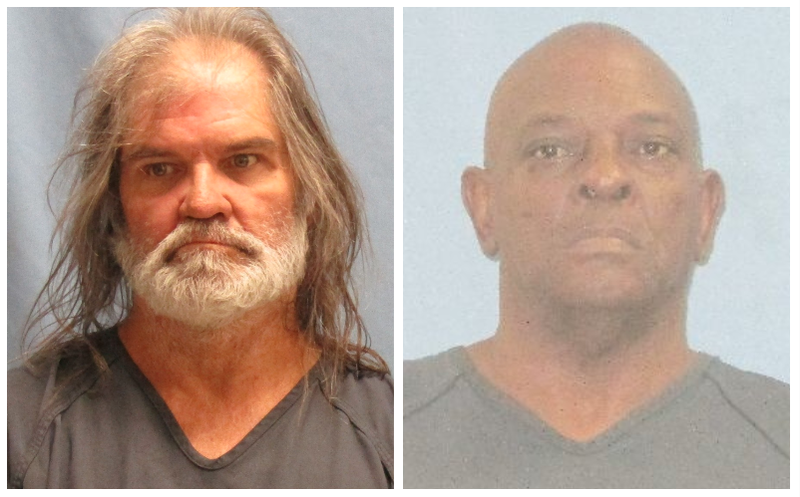 Steven Voegele, left, and Samuel Brass are shown in these booking photos from the Pulaski County jail.

Police said they believe a 55-year-old White County woman whose body was removed from a Little Rock motel room and placed in a hallway on Saturday died from a drug overdose.

When officers arrived at Motel 6, 10524 W. Markham St., for "unknown trouble" shortly after 10:30 p.m., a man whose residence was listed as the motel told police he saw two men putting shaving cream on the business' security cameras, according to a Little Rock police report.

The man reportedly told police that when he asked one of the men, about the shaving cream, the man told him "he was covering up the cameras so that they wouldn't see him bringing out the dead body in his room."

Authorities said they found an unresponsive woman sitting outside of the motel room. Officers and medics attempted to resuscitate the woman, police said, but they were unsuccessful.

In addition to placing shaving cream on security cameras, police accused Steven John Voegele, 60, of disposing of syringes and took him into custody, an arrest report states. Another man, 69-year-old Samuel Brass, was arrested at his home at about 1:30 a.m. Sunday. Police accused Brass of helping Voegele remove the body and place it in the hallway.

According to the report, neither man made any attempt to notify authorities.

Voegele and Brass were taken to the Pulaski County jail, where they remained Monday morning.

Both are charged with abuse of a corpse, while Voegele was also charged with tampering with physical evidence. Bail was not listed for either man.