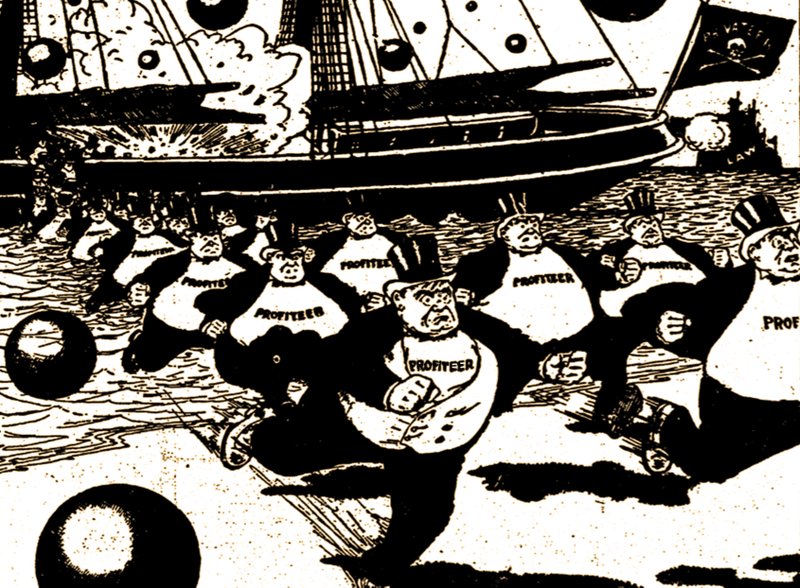 Profiteers run from their sinking ship in this syndicated editorial cartoon from the Aug. 31, 1919, Arkansas Gazette. (Arkansas Democrat-Gazette)

Fat bias and the hurtful imagery it inspires are sore subjects in 2019. But in 1919, a huge belly in a three-piece suit was a handy stereotype in a cartoonist's toolkit, visual shorthand for greed. With HCL ("high cost of living") already common parlance — and a fact of life — a sharp-dressed obese man represented profiteering.

Nobody liked a profiteer, not even the alleged profiteers.

This is not to suggest that anyone actually was profiteering, but in August 1919, with shoe prices suddenly hiking around on stilts, a half-dozen captains of industry in Chicago took it upon themselves to advise "the workingman" that he was responsible for the arm and the leg being demanded by shoe stores because — like a fool making more money than he had ever made in his life — he was handing over his arm or his leg for a pair of shoes.

This led to some high-profile mockery in the press and a not necessarily good-humored prank by a tradesmen's networking club.

The Gazette didn't pick up the origin story, but you can find that in the Chicago Tribune's Aug. 11, 1919, edition at Newspapers.com (which you need a subscription to read) and in the digitized anthology of the Pere Marquette Magazine from 1919 (free to read online). Both report the well heeled businessmen's bragging about their shoe conservation efforts:

Ernest A. Hamill, president of the Corn Exchange National, said he hadn't bought new shoes since 1916.

Britton I. Budd, president of Chicago's elevated lines, declared that he had been diligently replacing the soles on the same pair of shoes for four years. "When soles get thin I have new ones put on." First it was wartime conservation; now prices were too high.

Julius Rosenwald, president of Sears, Roebuck & Co. who owned "a shoe factory or two," had just put new soles on his apparently lone pair and was confident they would last a few more years. "I probably will get along with what I have until prices go down. Everyone should. Then prices would come down in a hurry."

Harry H. Merrick, president of the Great Lakes Trust Co., blamed the workingman — "getting higher wages than ever before in his life" — for driving the market up with his profligate purchases of $14 or $18 shoes. If the workingman would only follow the thoughtful economies of the businessman and his family, prices would fall.

"I have just bought a new pair of shoes, after four years of conservation," said J. Ogden Armour, owner and president of the Armour meatpacking company, which was under investigation for alleged food hoarding and being denounced as a profiteer daily in the press by the U.S. attorney and other law-enforcement political types. "The repair man couldn't do any more with my shoes, but I don't like to buy when prices are so high."

Ogden responded with a sarcastic request for a complete set of clothing, and he itemized each of the modestly priced pieces he could use. The Gazette played that story on Page 1.

Soon enough came this gem, in the Sept. 7 Gazette:

Chicago, Sept. 6. — "I haven't bought a pair of shoes since the United States entered the war." — statement last month by J. Ogden Armour.

"Within the last two months we have made four pairs of shoes for Mr. Armour and delivered them and received payment. One pair of low shoes cost $29.80 and three pairs of high ones $23 each." — Statement today by J. Letang, of Sauer & Letang, custom shoemakers.

The obvious inconsistency of these two statements made the Chicago Builders' and Traders' Exchange wonder aloud if the solicitude which inspired their gift of shoes to Armour had not been misplaced.

According to members of the exchange, the $3.50 boats already have been sent to the packing magnate, so they now estimate that the object of their attentions has five pairs of shoes, or no, six, counting the pair which he had been wearing since the beginning of the war.

"Of course," said Sullivan, "I wouldn't want to comment until Mr. Armour himself has had an opportunity to explain. Until then I cannot believe that he would agree to accept our present, which was made under the impression that he was in real need of footwear, when he had just bought $125 worth of shoes."

Armour was unavailable for comment because he was weekending in the Michigan woods, but his publicist denied emphatically that his employer had bought the four pairs of shoes alleged. He also said that the shoes from the builders' exchange had "failed to arrive."

The spat amused readers in Arkansas, but the larger conflict mattered to them, too. The HCL was no joke, and various unions were on strike demanding higher wages. People who wanted to support business and believed in the power of the profit motive were upset.

At a meeting in August, a member of the (powerless) Fair Price Commission of the Little Rock Board of Commerce announced he was resigning. As a lawyer, he couldn't be part of undermining 14 of his clients. T.M. Mehaffy nevertheless averred that something was very wrong with prices for meat and for shoes and that, whoever was to blame, whether producer, middleman or retailer, "the thing should be stopped."

A representative of Chicago's Armour meatpacking company was in the audience, and he undertook to explain how right and reasonable it was that meatpackers there should store 150 million dozen eggs rather than roll them onto the market all at once. But the entire committee undertook to contradict him, and he could not make himself heard.

"Bacon at 70 cents a pound is exorbitant," said Mr. Mehaffy. "Eggs, canned goods, everything is too high. We don't want to hurt anybody, factory, producer, middle man or retailer. We don't want to put anybody out of business, but certainly we are paying too high for our produce, and prices have got to come down."

As a popular complaint, the price of shoes had "legs." Meet me here next week for a bit more of this shoddy shoe story — the story of "shoddy." 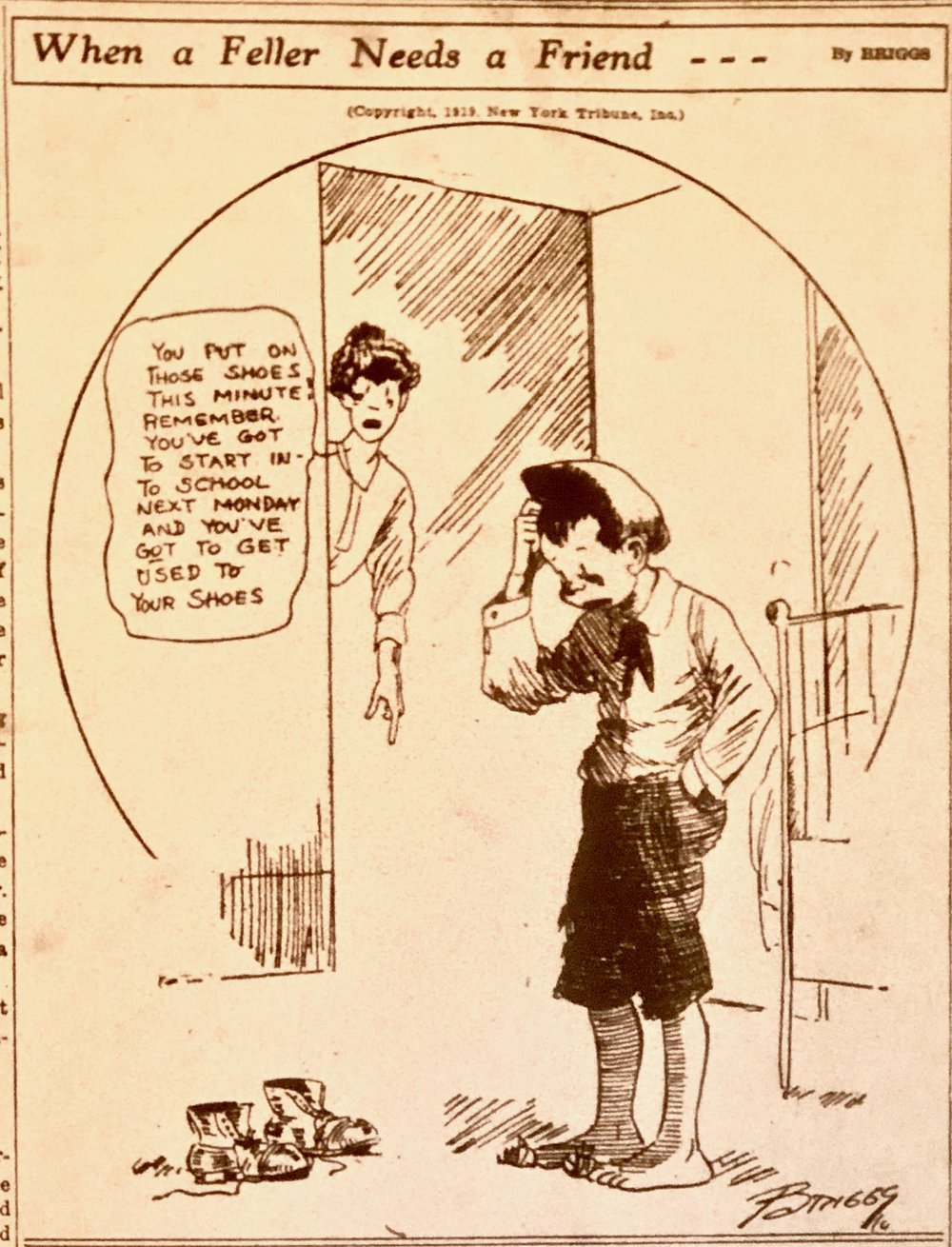