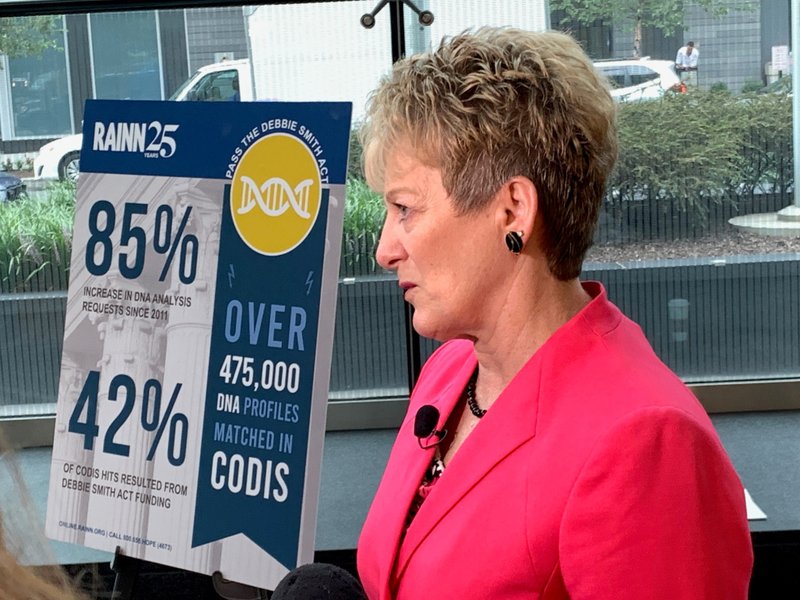 Debbie Smith, whose journey through the criminal justice system led to the Debbie Smith Act, funding testing of backlogged DNA kits, pleads for continuing the funding at a news conference on Friday at the D.C. Department of Forensic Sciences' laboratory in Washington. MUST CREDIT: Washington Post photo by Tom Jackman

Debbie Smith was ready to tell her story again, if necessary. Rape victim. DNA evidence untested for years. Evidence finally tested, suspect identified and convicted. Her story helped inspire the federal Debbie Smith Act, first passed in 2004, to provide funding for testing and training to eliminate the vast backlog of untested DNA and rape kit evidence across the country.

Over the next 15 years, nearly 200,000 DNA matches have been made by a national database after samples were submitted because of the Debbie Smith DNA Backlog Grant Program. But now that funding is set to expire, so Smith stood on a podium in Washington on Friday morning and pleaded with Congress to reauthorize the funding before the law expires Sept. 30.

"Most victims went through that grueling evidence collection process," Smith said of the DNA collection that happens after a sex crime, "with the hope that it would help them. Please, I'm begging Congress to allow them to live in that hope."

The Senate unanimously reauthorized the Debbie Smith Act in May and sent it to the House. It hasn't moved. The leaders of the Rape, Abuse and Incest National Network said Friday that they had gathered 32,000 signatures from online petitions that they were presenting to House leadership in hopes it would push Senate Bill 820 toward passage.

Scott Berkowitz, the president and founder of the organization, said that "some in the House are using it [the Debbie Smith Act] as leverage to get the Senate to pass other things that have nothing to do with DNA testing. We need Speaker [Nancy] Pelosi and Majority Leader [Steny] Hoyer to step up."

Hoyer's staff said that the House had reauthorized the Debbie Smith funding as part of its vote in April to reauthorize the Violence Against Women Act, meaning that the funding has cleared both houses of Congress but in different bills.

"We are discussing next steps with the [House] Judiciary Committee," said Mariel Saez, a Hoyer spokeswoman. Saez said Hoyer "continues to urge" Senate Majority Leader Mitch McConnell, R-Ky., "to take up the [Violence Against Women Act] reauthorization passed by the House in April, which includes the Debbie Smith Act reauthorization."

A McConnell spokesman said Friday that the majority leader was not leading the Senate's handling of the Violence Against Women Act.

The Debbie Smith Act was reauthorized with broad bipartisan support in 2008 and 2014. The current bill authorizes the Justice Department to spend up to $151 million in grants to states and localities for costs associated with testing DNA evidence, to include employee training and equipment for labs to increase their testing capacity.

The problem of DNA going untested for months or years is not a new one. Sometimes, evidence is taken from a victim or a crime scene and then left on a shelf in a police department. Sometimes the local or state crime lab is so backed up that it takes months just to get the evidence analyzed.

Once a DNA profile is developed, it's submitted to "CODIS," the national DNA databank, which already has about 17 million profiles, in hopes of finding a match. The DNA can also help exonerate wrongly accused defendants, experts noted.

According to the FBI, that system has produced more than 475,000 matches, solving crimes across the spectrum from murder to rape to burglary to vandalism. Of those 475,000 hits, the National Institute of Justice found, about 42% came as a direct result of the Debbie Smith Act, or about 200,000 cases that might otherwise have gone unsolved.

One in five rape kits entered into the national DNA databank generates a match pointing to a serial rapist, the Rape, Abuse and Incest National Network said.

And even with $1 billion in federal spending since 2004 to address the backlog, the problem is getting worse. A recent study by the Government Accountability Office found that the number of untested cases has grown by 85% in the past six years.

And that's just the backlog in the labs. Berkowitz said another 200,000 rape and DNA kits are estimated to still be held by law enforcement agencies, "a problem which is a lot bigger than we knew at the beginning." He said some states are requiring police to audit their evidence rooms for untested kits.

"To think there is a 200,000 sexual assault backlog is unconscionable," said Rep. Ann Wagner, R-Mo., who has sponsored a number of bills aimed at sex crimes and trafficking. "This is one of the most important things we should be doing in Congress. This is a no-brainer. Shame on Congress for not bringing this forward sooner."