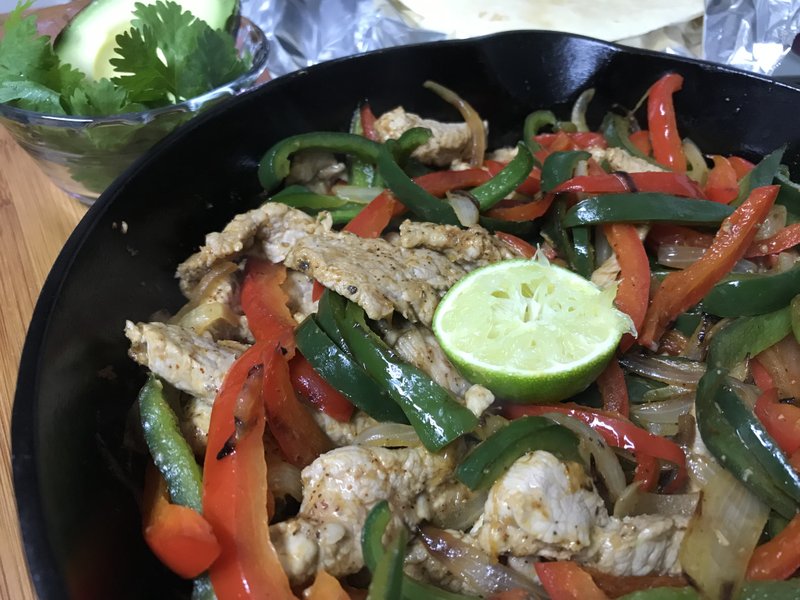 I'm hesitant to call this recipe fajitas, although it is based on the familiar Tex-Mex favorite.

But instead of steak, chicken or shrimp, I opted for very thinly sliced strips of pork tenderloin. To keep the lean pork from drying out and toughening, I used a Chinese technique that calls for coating the strips of meat with cornstarch.

Coating the meat in cornstarch binds the marinade ingredients to create a sauce, and it results in more tender meat by forming a barrier that protects the meat from the intense heat. The result is meat that is so tender it is almost silky. I often use this technique when making stir-fries and it made sense to use it here.

Chicken breasts or thighs can be substituted for the pork with no changes needed.

In a large skillet, heat 1 tablespoon of the vegetable oil over medium-high heat. Add the peppers and onion and cook, stirring frequently for about 5 minutes or until vegetables are tender and slightly charred.

Meanwhile, in a separate skillet (preferably cast-iron) or grill pan heat the remaining vegetable oil over high heat. Add the pork strips and any accumulated juices and cook, stirring frequently, until pork is no longer pink, about 5 minutes. Add the pepper-onion mixture to the skillet with the pork and stir to combine. Squeeze the lime halves over all.