NWA Democrat-Gazette/DAVID GOTTSCHALK Joel Lookadoo walks through the Golden Eagle Cheer and Golden Girls Dance teams Tuesday following a ceremony recognizing him as 2020 Arkansas Teacher of the Year at Lakeside Junior High in Springdale. Lookadoo had spent the past several years as a math teacher at the school.

SPRINGDALE -- Joel Lookadoo said a desire to coach basketball motivated him to pursue a career in education. In order to coach, he also had to teach.

He realized after he got into the classroom how much he loved teaching. He has dropped the coaching gig.

The former standout point guard at Shiloh Christian School stood on a basketball court again Tuesday. This time, he accepted the 2020 Arkansas Teacher of the Year award in front of family, friends, co-workers and hundreds of students during a special assembly at Lakeside Junior High School.

Lookadoo is in his seventh year in education and his first year as instructional facilitator at the Tyson School of Innovation. He spent his first six years as a freshman math teacher at Lakeside.

Tuesday's announcement surprised the 29-year-old Lookadoo, who was lured under the ruse his principal wanted him to observe how the school did its student recognition assembly.

"I didn't know this was what it was," he said. "Thought it was a regular assembly and started noticing who was in there and it's like, hang on, something's going on." 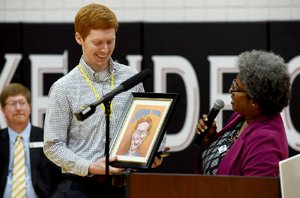 Photo by David Gottschalk
Joel Lookadoo (left) receives a caricature Tuesday from Stacey McAdoo, the 2019 Arkansas teacher of the year.

Among those present was state Education Secretary Johnny Key, who announced the award.

"At the Department of Education, we look all over the state for excellence," Key told the audience. "And we heard that today you all were having a student celebration where you are recognizing excellence. And I thought this would be a great opportunity for us to join you in recognizing excellence we found right here at Lakeside Junior High."

The crowd cheered for nearly a minute after Key called Lookadoo's name. Gov. Asa Hutchinson offered his congratulations via a video. Hutchinson said Lookadoo created a college-prep program called Beyond for first-generation college students to get help preparing for the ACT and applying for scholarships. Lookadoo also started a character education program helping students cope with anxiety and depression, Hutchinson said.

Stacey McAdoo, the state's 2019 Teacher of the Year from Little Rock, was there to salute Lookadoo as well. She compared Lookadoo to a superhero and presented him with his "super teacher" portrait.

"He was an excellent basketball coach," Rollins said. "Joel did more than just teach basketball, however. He taught his players to be better men, be better students, be better citizens."

Lookadoo had a habit of meeting with students to establish a relationship with them as much as two months before actually having them in his class, Rollins said.

"We say in our work all the time that students need caring adults encouraging them and supporting them, and Joel has been that type of person for many Springdale students," he said.

Lookadoo said he was honored and added individual awards are often the result of a great team. Lakeside is full of teachers who care about students and want to challenge them, he said.

He said he liked putting students in the position of the teacher, having them teach fellow students.

"I think they learn really well hearing from their peers," he said.

Lookadoo has led numerous professional development sessions in Springdale. He serves as the math content leader for Ensuring Academic Success for English Learners at the Northwest Arkansas Education Service Cooperative, according to a news release from the Department of Education.

His tenure as teacher of the year will begin July 1 and go through June 2021. Lookadoo will travel the state as a representative for teachers and will serve as a nonvoting member on the state Board of Education.

The Arkansas Division of Elementary and Secondary Education announced the 15 regional finalists for 2020 Teacher of the Year in July. Four state semifinalists were announced Aug. 1. They included Lookadoo; Catherine Beckham, a high school teacher in Mountain Home; Melissa Spence, a first-grade teacher in Conway; and Jeffrey Whitlow, a fifth-grade teacher in Little Rock.

On Tuesday, Lookadoo received a $14,000 award sponsored by the Walton Family Foundation. He previously received $2,000 for being a regional finalist and a state semifinalist. 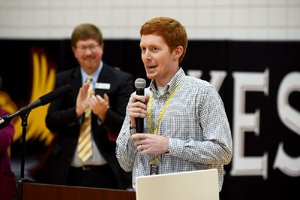 Photo by David Gottschalk
Joel Lookadoo speaks Tuesday during a ceremony recognizing him as the 2020 Arkansas Teacher of the Year at Lakeside Junior High in Springdale. Lookadoo, now an instructional facilitator at a different school, had spent several years as a math teacher at Lakeside.

Lookadoo earned a bachelor’s degree from the University of Central Arkansas in 2013 and a master’s degree in educational leadership from Arkansas State University. He is licensed to teach math for grades 7-12 and physical education and health for grades K-12. Lookadoo also is licensed as a building level administrator and is certified in English as a Second Language. He is National Board certified in high school math. He and his wife have two children, ages 4 and 1.

The Arkansas Teacher of the Year award has been handed out nearly every year since 1959. Lookadoo is the fifth teacher from Benton and Washington counties to receive it. The others were Muriel Chism, a Rogers elementary teacher, in 1987; Rosemary Faucette, a Fayetteville junior high teacher, in 1993; Charles Rossetti, a Springdale High School teacher, in 1998; and Justin Minkel, a second-grade teacher at Jones Elementary in Springdale, in 2007.