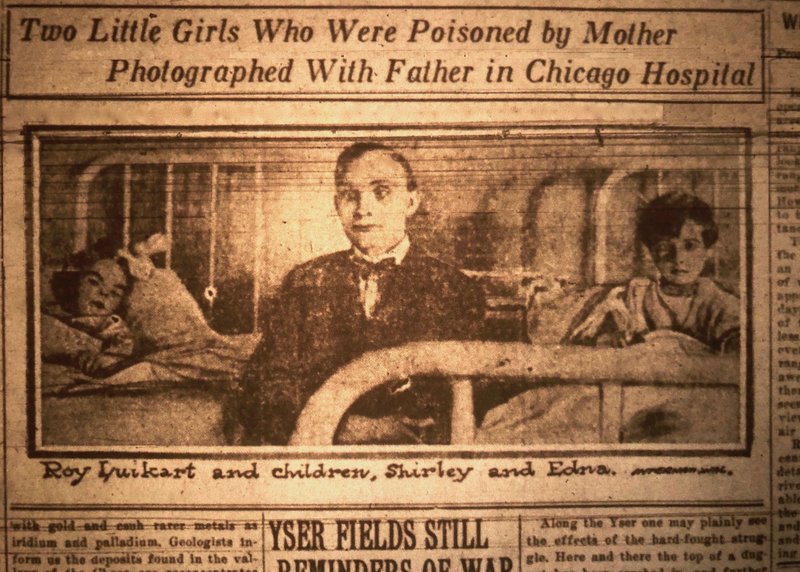 Roy Luikart with his daughters, Shirley and Edna, who were saved after being poisoned by their mother. (Arkansas Democrat-Gazette)

During the night of Sept. 28, 1919, a housewife in the Detroit suburb of Royal Oak, Mich., fed her two daughters "bi-chloride of mercury." She fed each girl four pellets. The girls became violently ill. She enclosed more pellets in capsules and gave the girls a second dose.

Known as "corrosive sublimate," mercuric chloride was available at drugstores and had a host of uses, from treating syphilitic sores and disinfecting everyday wounds to killing fungi on seeds.

Her neighbors and her husband, a real estate salesman, thought the girls were sick from eating green pears. But they got worse. Five days later they were dying, and Hazel Zorba Luikart confessed to her family physician that she had poisoned Edna, 5, and Shirley, 7.

All hell broke loose in the columns of newspapers across the nation. Sometimes her last name was Leukart or Luekart, but it was the same essential story everywhere, word for word, and headline writers gasped in unison.

These gasps are preserved in digital newspaper archives, vast databases of word-searchable image files. And so we can quote the Detroit Free Press from Oct. 7, 1919:

Two beautiful little girls, golden haired, and brown eyed, are dying in Providence hospital, Detroit, from the effects of corrosive sublimate, while their mother, Mrs. Hazel Leukart, of Royal Oak, is in the Oakland county jail charged with giving them the poison.

She was "hysterical" when she was arrested and all she would say was "I am not afraid."

Thanks to services like Newspapers.com, newspaperarchive.com, chroniclingAmerica.loc.gov, we can search for the "deranged," "degenerate," "insane" mother's name and read what the early 20th century made of her confession. We don't need to diminish our own humanity by speculating about why she did what she did, how she grew up, what she wanted to be, whether she hated men, whether she was in the grip of evil philosophies, whether she had a lover, whether her husband mistreated her, whether she was a monster ... because those old boys (and gals) did all that already. 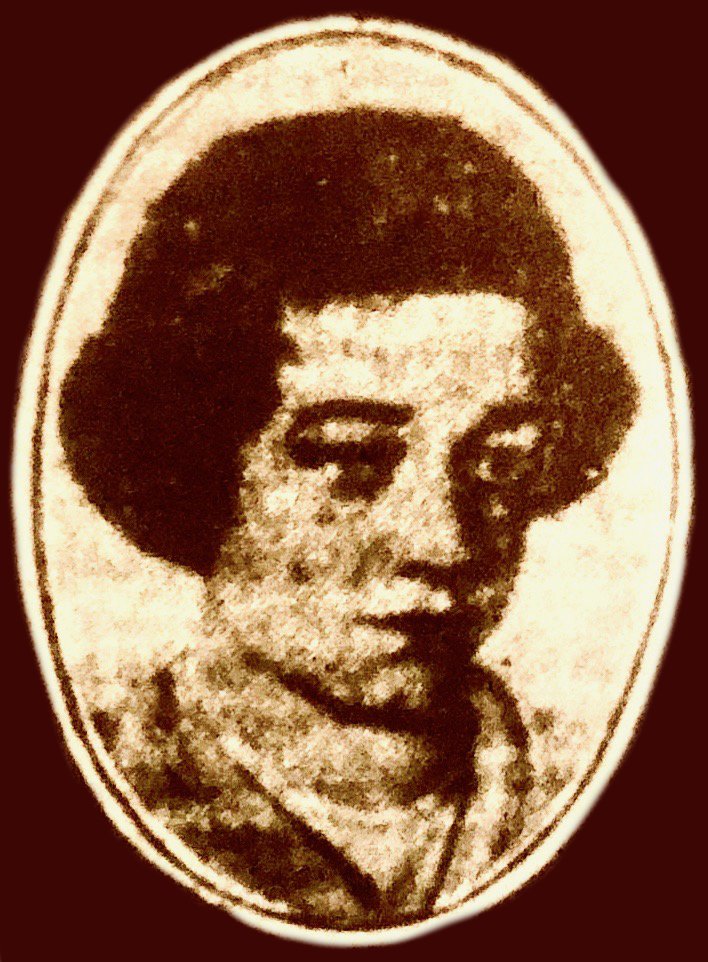 The Arkansas Gazette and Arkansas Democrat were not exceptions, except in that the Gazette held on to an early misspelling of the poisoner's last name longer than most. Here's the Democrat, Oct. 10:

The mother, now in the Pontiac (Mich.) jail, confessed, according to Mr. Luikart and officers, that she administered the poison "as a result of a flash from hell."

For three weeks, the Luikart children, their "stunned" father and "insane" mother were front-page news. At first, they were a horror story:

Physicians say nothing can be done to save the children. The poison will accomplish its mission in the course of 12 days in the case of the little ones and in 14 days where adults are concerned.

Under a line drawing of a petulant "Discontented Mother" in The Washington [D.C.] Herald on Oct. 12, L.J. Dretzka helpfully described their likely "lingering death ... full of agony" as the poison ate its way into their tissue, wrecking internal organs. The usual treatment, Dretzka, said, was table salt and forced perspiration. But wait -- the girls had been transported to Chicago. A heroic Dr. Thomas A. Carter had developed a highly successful method of treatment. "It consists chiefly of the use of a special serum together with blood transfusions."

Thomas J. Wren, a reporter for The Chicago Evening Post, rolled up his sleeve to contribute and wrote about the experience. His blood was a match for Shirley (sometimes spelled Sherley). While the girl mumbled little sentences, "Oh mamma ..." or "I've got to get up for school ..." the preparations moved forward swiftly. Carter told Wren, "Just watch."

I watched — as well as I could in view of the fact that I had a glass tube tied to a vein in my left arm and that Miss Steele was standing between me and the patient, using things with something that looked like a bicycle pump. ... Still I was able to see enough of Sherley to realize that something very like a miracle was taking place — a miracle which fate might keep from bringing about its intended effect, but none the less a miracle. 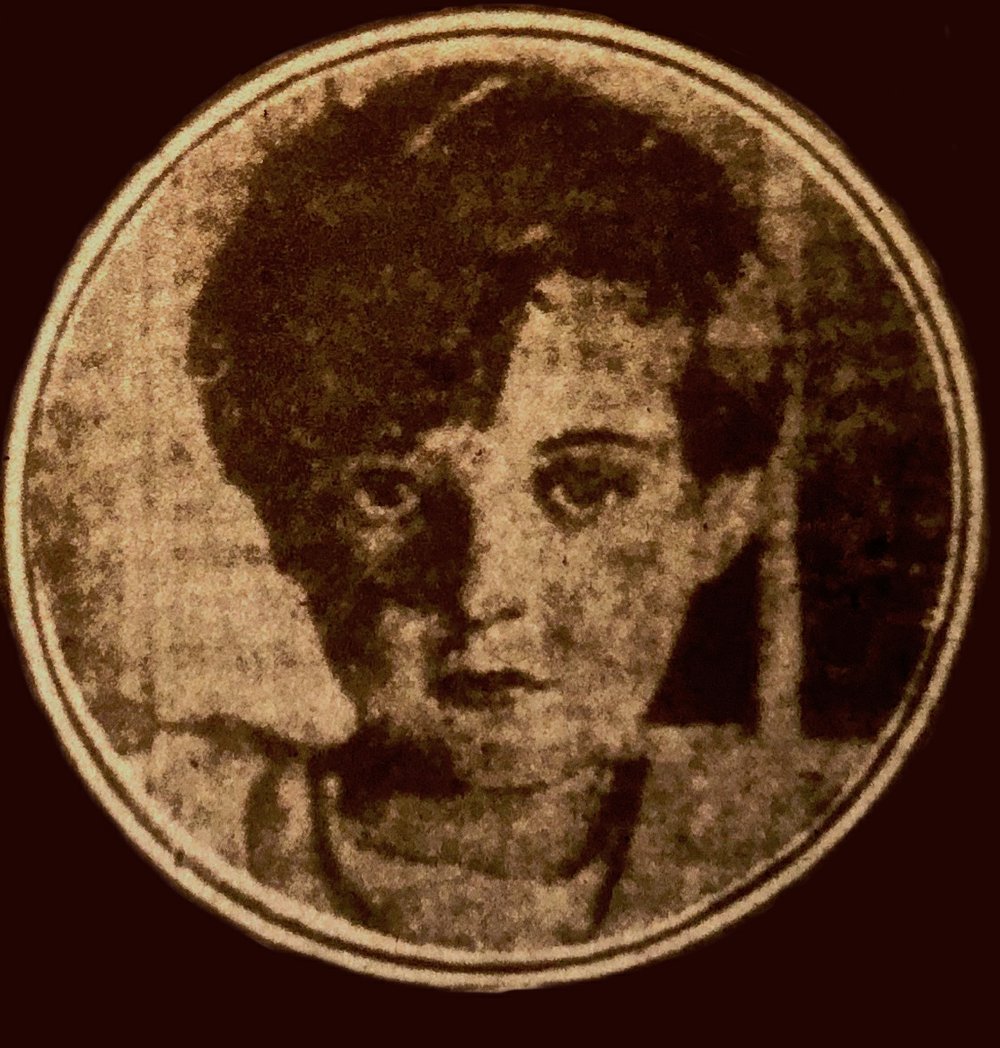 Edna Luikart in the hospital in October 1919, from Arkansas Gazette (Arkansas Democrat-Gazette)

Both of the Leukart Children Will Recover

By Oct. 18, they were going home to Detroit. Meanwhile, Chicago theaters were showing movies of them by a company called Fox, and their father was being pounded with offers of clothing and shoes. Henry Ford "had decided to give him a good job in his automobile factory."

Their story continued, segueing onto inside pages, because another poisoning victim, 2-year-old Teddy Harrington, died on his way to Carter's clinic. And then Alfred J. Fein Jr., toddler son of a physician, ate "enough to kill 10 men" while his father was in another room.

In late October, "alienists" were busily studying Hazel Luikart, gently questioning to get at her tangled motives, according to the Charleston Daily Mail. The alienists thought that her life story might lie behind her inexplicable crime, and explain it.

She was born in South Dakota, and as a child was discontented with the surroundings of village and farm.

The Mail relayed that she had married Luikart because he promised her a home in the city, but their home in Detroit was on a lonely side street.

He said that he forgave her and blamed himself for not realizing he wasn't treating such a sensitive person correctly.

On Nov. 2, their blood-brother reporter gave the girls a day on the town.

Nov. 4, their father placed them in an orphanage — apparently not permanently because in March 1920, when Roy E. Luikart filed for divorce, he also requested an injunction against Hazel's parents, Mr. and Mrs. Alexander Zorba, who he said had threatened to kidnap them.

Luikart claimed that his wife had been happy for the first three years after they married in 1911 at Herrick, S.D., although she had bouts of jealousy that anguished him. After they moved to Detroit in 1916, she became a devotee of the philosophy of "sex antagonism" and harped on the topic. She would claim, he said, that "women were the toys and playthings of men — that men never suffered and that she had made all the sacrifices and he had made none. ... She dreaded the time when her children should grow to womanhood and suffer as she had suffered." He also accused her of misbehavior with a neighbor in Royal Oak.

From the state hospital, she counter-sued, accusing him of abuse.

Confined for 49 Years, Mother to Spend Christmas With Daughter She Was Accused of Poisoning

Hazel, 75, was leaving the Ionia State Hospital to live with Mrs. Edna Turtzer, 54, whose sister Shirley had died in 1964. "I don't want to go digging back into the past," Turtzer said. "All I remember is a lot of newsreels and things."

She didn't have any specific plans for their first Christmas together since her childhood. "Maybe we'll just stay home."

Hazel's daughters were saved by medical progress, but medicine, and society, hadn't progressed enough to save their family.